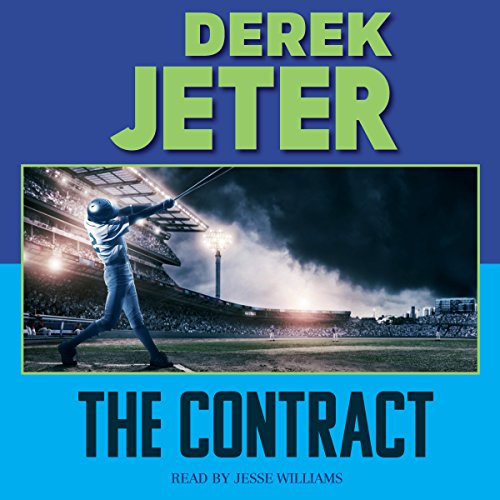 The debut book in the Jeter Publishing imprint, The Contract is a middle-grade baseball novel inspired by the youth of legendary sports icon and role model Derek Jeter.

Derek Jeter is a legend in professional sports and a role model for many youths around the country. While leading the New York Yankees to five World Series Championships and achieving myriad milestones and accomplishments on and off the field, including 13 All-Star nods and membership in baseball's exclusive 3,000-hit club, Jeter has established a reputation of unparalleled character, credibility, dedication, and excellence. When Jeter was a boy, he had the dream of becoming the shortstop for the New York Yankees. Inspired by his childhood, this start to a middle grade series is about a boy who sets high goals for himself and makes his dreams come true through hard work, teamwork, and determination.

Special invitation from Audible!
Learn more about Membership
List Price: $11.33
You Save: $0.34 (3%)
By completing your purchase, you agree to Audible’s Conditions Of Use
Sold and delivered by Audible, an Amazon company
Share

4.8 out of 5 stars
4.8 out of 5
374 global ratings
How are ratings calculated?
To calculate the overall star rating and percentage breakdown by star, we don’t use a simple average. Instead, our system considers things like how recent a review is and if the reviewer bought the item on Amazon. It also analyzes reviews to verify trustworthiness.
Top reviews

Carson Y.
3.0 out of 5 stars Not Worth Your Time!
Reviewed in the United States on November 8, 2019
Verified Purchase
The book Contract written by Derek Jeter is an ok book overall. The part that bored me though, was that it was pretty much like all the other baseball sport books. Most of the other books are different but this one just copied many of the situations with different wording, different characters, and the book just really stopped mid air. But I will say that since it was written in first person I did enjoy it a little more.
One of the settings of the Contract is at their Little League ball diamonds. The book has multiple different settings as well. Like at Derek’s school, his house, his buddy’s house. Jeter does make you feel as if you are in the book. Jeter did make me see the setting if I closed my eyes, I understood the book more when he did that. It is if you're in the book yourself. I would recommend this book to someone who can’t read longer books. I would NOT recommend this to someone who likes longer books. I would only give this book 3 ½ stars.
Read more
Helpful
Report abuse

Sharon French
4.0 out of 5 stars Dreams Can and Do Come True
Reviewed in the United States on November 20, 2014
Verified Purchase
I purchased this book for my grandson's birthday. His family is a huge New York Yankee and Derek Jeter fan. Of course, I had to read the book first! This book is definitely written for middle grade children.

The book itself is focused on Derek Jeter when he is in 3rd grade (also the age of my grandson.) There are some great moral values presented by his parents to Derek and written up in a contract that Derek must sign to continue to play baseball. The story spends time in the classroom as well as on the Little League baseball field. Although there were a lot of details of the baseball games (which were a bit much for me) I know that my grandson will love that.

Much of the focus of this book is on the essay that Derek had to write as an assignment from his teacher on what he wants to be when he grows up. Even in third grade Derek knew he wanted to play shortstop for the New York Yankees. Derek's parents set the stage for that possibility with The Contract. As well as instilling the moral values it helped Derek to understand that only through hard work and determination could that dream become a reality. Derek's parents supported him and his dream and we all know now the result of those dreams.

I understand that this book is the first of many that will follow. I am assuming that they will take the reader through the rest of Derek's story. All in all I think this is a must read for children. I cannot think of more than a handful of professional athletes that have shown us how a solid childhood background with strong moral values, hard work and the support of family can lead to fulfilling those childhood dreams.
Read more
7 people found this helpful
Helpful
Report abuse

Susan M. Withey
5.0 out of 5 stars and has loved every one of them
Reviewed in the United States on April 19, 2017
Verified Purchase
In a world where there are so few positive sports star role-models - Derek Jeter stands out as a shining star in our home. We have all 4 of the books in his series. (We just received Fair Ball yesterday!) My 6 year old son has read The Contract, Hit or Miss, and Change Up; and has loved every one of them, as have I. My son even insisted on buying the books for his grandmother for her birthday (she's a librarian). She read and loved the books, and the two had great discussions about them! Each book has kept his interest through to the end, and are full of important life lessons. Knowing that these books are having a positive impact on my son's character and mind-frame does this Mamma's heart good. We will buy every one of the books in this series without a doubt, and if you have school-age boys - you should too!
Read more
Helpful
Report abuse

Bresee
5.0 out of 5 stars Great role model!
Reviewed in the United States on January 13, 2015
Verified Purchase
My son read this entire book in a week and loved it. He is in 6th grade. He learned about the key factors that played a big part in Mr. Jeter's life that got him where he is. It really motivated my son to make changes in his life as he has the same goals and dreams Mr. Jeter did as a young boy/man. My son still is begging me to find a way to meet him. He doesn't understand that's not an easy thing to do so reading his books is as close as I can get him right now. He wants to collect all the books and as a parent, can't think of a better sports figure for my son to model himself after so that makes me happy.
Read more
Helpful
Report abuse

EvelynD
5.0 out of 5 stars Planting the seed that greatness is achievable
Reviewed in the United States on May 10, 2015
Verified Purchase
I am a Foster Grandparent in one of our local public schools working with 4th and 5th graders. I purchased specifically after hearing Derek Jeter talk about the contract he had with his parents. I have shared this book with a couple of the 5th grade boys and they have read it with interest - maybe for the great descriptions of the games, but the idea that determination, achievement and educations are all tied together seeps through their thought process. I will continue to share this book in the future.
Read more
Helpful
Report abuse

LINDA ROBERTSON
5.0 out of 5 stars All parents should read this book with it's positive messages and tool.
Reviewed in the United States on September 23, 2016
Verified Purchase
I really enjoyed this book and its message. It is fascinating to read of Derek's parents and the lessons they taught him that were pivital in making him the respectful man he became. It is a book every parent should read and one that will guide their children in a positive way with goals from thier parents.
Read more
Helpful
Report abuse
See all reviews

Cherisa Rydholm
4.0 out of 5 stars Four Stars
Reviewed in Canada on October 25, 2014
Verified Purchase
A must read
Read more
Report abuse
See all reviews
Back to top
Get to Know Us
Make Money with Us
Amazon Payment Products
Let Us Help You
EnglishChoose a language for shopping. United StatesChoose a country/region for shopping.
© 1996-2021, Amazon.com, Inc. or its affiliates