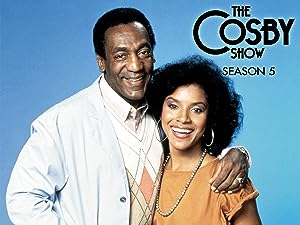 Auburn NiewiadomskiReviewed in the United States on August 2, 2010
4.0 out of 5 stars
The Cosby Show Season Five
Verified purchase
I believe season five is my favorite season of the series. I especially love the theme song, and it's the most unique theme song from the series. And there were so many hysterical episodes, I especially love the episode "A Room With No View", Vanessa and Rudy have been fighting constantly and they on accidentally damage the roof during a big fight, and as a punishment Cliff decides to make them live in the basement until they learn to get along. And I love "Day of the Locusts", this is my favorite episode that includes Sondra, Sabrina Le Beauf plays Sondra and she did a great job in this episode. And there were also some big changes in season five, in "Out of Brooklyn" Denise decides she wants a job in Africa as a photographer's assistant, and in "The Birth" Sondra finally gives birth to twins. But as we have become accustomed to, there is no bonus material on this set. And the packaging is the same as usual, each disc is placed in a seperate slim case, and also included on the box are the episode titles but no episode descriptions. Below I'll list the episode descriptions for season five just in case someone is interested.

Together Again and Again - Airdate: 10/6/1988 - As Theo begins his freshman year at New York University, Denise announces that she is dropping out of Hillman College.

Out of Brooklyn - Airdate: 11/3/1987 - Denise leaves Brooklyn for a job in Africa as a photographer's assistant.

Cyranoise de Bergington - 11/17/1988 - Theo wants to date his friend Howard's ex-girlfriend, but he is stunned upon learning who she wants to date.

How Do You Get to Carnegie Hall? - Airdate: 12/1/1988 - Vanessa and her friends want to be professional singers.

If the Dress Fits, Wear It - Airdate: 1/8/1988 - Clair secretly goes on a crash diet and exercise program to lose five pounds in a week so she can fit into a dress.

Is There a Hamster in the House? - Airdate: 12/15/1988 - Rudy takes care of a friend's hamster for the weekend, but it soon dies of disease, so Cliff decides to try to replace the hamster with a new one.

Truth or Consequences - Airdate: 1/5/1989 - Rudy lies to cover for Vanessa, who secretly goes out on a date with her boyfriend.

The Lost Weekend - Airdate: 2/2/1989 - With the rest of the family gone for the night, Theo throws a "small" party that gets out of control.

No Way, Baby - Airdate: 2/6/1989 - Cliff tracks down the grandfather of one of his patients; an expectant teenage mother with no other family.

Can I Say Something, Please? - Airdate: 2/9/1989 - Rudy wants to change some of her rules, so Cliff and Clair experiment by letting her stay up as late as she wants.

The Dead End Kids Meet Dr. Lotus - Airdate: 2/16/1989 - Theo consults a voodoo shopkeeper for advice on winning his girlfriend back, but the attempt fails with the ridiculously high prices.

Theo's Women - Airdate: 3/16/1989 - After catching Theo kissing another woman in the lounge of her dormitory, Justine breaks up with him. Desperate to win her back, Theo turns to Cliff for advice.

A Room with No View - Airdate: 4/13/1989 - Vanessa and Rudy argue and fight. After the sisters do physical damage to the house, as a punishment Cliff makes them move into the basement.

What He Did for Love - Airdate: 4/17/1989 - Theo's friend Denny finds an expensive watch and gives it to his girlfriend, but it is soon revealed to be stolen merchandise.

The Cosby Show Season five is a fantastic season and even though this is only a decent release from Urban Works it's still a highly recommended buy.

HollyReviewed in the United States on July 29, 2012
5.0 out of 5 stars
Classic, clean comedy
Verified purchase
My husband and I were newly married back in 1984 when this series first aired. Thursday nights were definitely the "must see" TV people talk about primarily due to this show. We rarely missed an episode and when we weren't going to be home, we recorded it on our VCR (remember those?).

Fast forward many years and with a daughter added to our family, we bought these in 2007 and watched the first three seasons again. Earlier this year, we pulled out season 1 and laughed our way through it and are continuing on through the rest of the seasons. My daughter is 17, my husband 55, and I am 50 -- a wide range of ages and yet all of us are laughing from beginning to end and appreciating what a comic genius Bill Cosby is. The cast is incredible, the characters full of quirks and personality, the writing is stupendous.

If you haven't seen these before and are looking for good, clean fun give them a try. If you saw these years ago, give them another go since this is definitely a series that has stood the test of time.

Eric B. GordonReviewed in the United States on July 10, 2008
5.0 out of 5 stars
Life Goes On - and Adds On!
Verified purchase
Hee we are at the fifth Cosby Show go-round. And, if the viewing audience thought things changed the year before, this season brought changes - to the changes. Lisa Bonet has left the cast of A Different World, and her character, Denise Huxtable struggles with dead end jobs and ends up hopping a plane to Africa as a photographer's assistant. (All this to allow her to give birth to her daugher with Lenny Kravitz, Zoe below the radar.) Also, Theo starts his college degree at NYU but neglects to turn in his dorm fee.

But, why did I mention that first? The biggest change of all is the arrival of the next generation. At the season's opening, Sondra is nine months pregnant. Not with one child, as everyone thought, but with TWINS, Winnie and Nelson. (Only Sondra, Elvin and their doctor know this one piece of information prior to the birth.) Those two babies bring plenty of fun, drama and surrealistic comedy to the 5th season of The Cosby Show.

[Also of note is the re-appearance of Clarice Taylor as Grandma Anna Huxtable; she didn't appear once in Season 4, even though we see plenty of Earl Hyman as Grandpa Russell.]
2 people found this helpful

MJReviewed in the United States on February 9, 2014
5.0 out of 5 stars
Always the BEST!
Verified purchase
Been a big fan of Cosby for so many years. The Cosby Show was always a happy fun moral and good show, wish we had those kinds of shows now, So much of today's shows are garbage! All about sex with friends, and more sex sex and sex! UGH. So many great shows have been either canceled after only a few episodes that have come out and gone in a flash, WHY??? Cosby will always be the best family oriented with good morals! LOVE IT!
3 people found this helpful

lynleefReviewed in the United States on March 15, 2013
5.0 out of 5 stars
Just love it!
Verified purchase
I have seasons 3,5,6 & 7 so far and I think this one is the best yet! I love them all, but this one is by far the funniest! Bill is wonderful and I just roar when Phylicia Rashad gets mad at the kids. I can relate, I have 3 kids! Besides being a joy for me to watch this is also fun for the kids and I don't have to worry about any inappropriate scenes. I highly recommend The Cosby show to adults and children, you'll love it!

Richard ZimmermanReviewed in the United States on October 26, 2019
5.0 out of 5 stars
Had fun watching!
Verified purchase
Loved!

Nicole Wilson, Author of &#34;Undressing Chickens&#34; and &#34;The Callie Gang&#34;.Reviewed in the United States on April 2, 2010
5.0 out of 5 stars
The Cosby Show
Verified purchase
The Cosby Show-who doesn't know it. It stands for fun and entertainment for the whole family. Cosby, witty and smart, solves problems, educates, and makes us laugh. Through all the season Cosby never ran out of jokes and advice, and to me remains one of the greatest entertainers.
Raising a large family with 5 children and parents with demanding jobs, presents Cosby with enough humorous materials to keep any viewers happy and smiling.
A show that can be watched over and over without becoming boring.

dianalReviewed in the United States on December 7, 2013
5.0 out of 5 stars
Great show!!!!!
Verified purchase
The Cosby show is one of the best family shows made. Always a good lessen to be learned. It is amazing how he teaches his children about life. Old shows like this are far better than the shows today. More shows like this would probably benefit the world.
2 people found this helpful
See all reviews
Back to top
Get to Know Us
Make Money with Us
Amazon Payment Products
Let Us Help You
EnglishChoose a language for shopping. United StatesChoose a country/region for shopping.
© 1996-2021, Amazon.com, Inc. or its affiliates