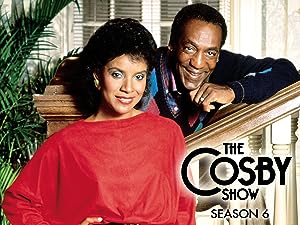 (252)
7.41991TV-PG
Denise returns from Africa with a husband and step daughter. Vanessa gets drunk for the first time. Theo moves in with his girlfriend.

LJReviewed in the United States on December 19, 2013
4.0 out of 5 stars
Great condition but are some of the episodes edited in this season???
Verified purchase
I received this set this week just in time for Christmas. It was a used set but well-packaged and received in excellent condition, like new, as the seller promised. DVD was of excellent quality! Am well pleased with that! I would highly recommend this seller. Unlike previous seasons, however, I am a bit suspicious that the episodes in this season (or some at any rate) were heavily edited. From unexplained or seemingly non-flowing loops between scenes to characters suddenly appearing without any previous lead-up. I found it odd and confusing-this is why I didn't give a 5-star review which the actual humour and acting in season 6 would certainly merit. The comedy however is priceless and just as fresh and funny as when first aired. Great quality overall...just a lot of suspected episode editing! Guess this is something for the distributors to explain..another thing-why don't they make it easier for the viewer to go from episode to episode as it was for Seasons 1 and 2 when they were under different distribution (Urban Works Entertainment?)? This format from Seasons 3-6 is killing me--where you always have to 'Select Episode' and press AGAIN on your DVD remote to 'Play'--oh my gosh! Not the most convenient way to go about it! But nevertheless--great show and wonderful memories!! Timeless classic!
4 people found this helpful

Eric B. GordonReviewed in the United States on July 10, 2008
5.0 out of 5 stars
The Shift in the Huxtable Tide
Verified purchase
Denise Huxtable is now Denise Kendall, Rudy gives the youngest-child role to her stepniece, Olivia Kendall (and realizes how good she had it in her own room), Vanessa is entering her rebelious phase, and Theo struggles with newly-diagnosed dyslexia and the misadventures of being an NYU sophomore living away from home. These combined elements make this, the sixth season of The Cosby Show just as pivotal as its predecessor.

Here, we're introduced to child actress and future recording artist Raven-Symone as the deliciously cute and vivacious Olivia, as well as the emergence of Joseph C. Phillips as Lt. Martin Kendall, after a previous guest appearance as one of Sondra Huxtable-Tibbadeaux' dates. Other reviewers may have their opinions about why the Kendalls were brought into the cast. The way I see it, it wasn't my show. Besides, Martin and Olivia did bring to the show and were crucial to keeping it up to the minute as the series entered the 90's.

Auburn NiewiadomskiReviewed in the United States on August 3, 2010
4.0 out of 5 stars
The Cosby Show Season Six
Verified purchase
Season six of the Cosby Show in my opinion is not as great as the first five seasons but it's still a stellar season. There are again many changes, Lisa Bonet has returned to the show to stay (until the final season) and she's now married to Martin Kendall (Joseph C. Phillips) and she's also a step-mother to Olivia Kendall. (Raven Symore) And there were a lot of fantastic episodes that I enjoyed, "Mr. Sandman" is a hilarious episode, Rudy takes tap dancing lessons and while she's in class Howard Sims notices Cliff trying to tap dance and they decide to have a tap dancing challenge. "Isn't it Romantic" is another great episode, Cliff, Elvin and Martin compete to see who is the most romantic husband is in the family. But even though the season is great the release of season six is still exactly like the previous four, there isn't any bonus material and it's packaged like the previous four seasons, and there still are no episode descriptions, so I'll list season six's episode descriptions below.

Denise: The Saga Continues - Airdate: 9/21/1989 - Denise returns from Africa, with a new husband and stepdaughter.

Surf's Up - Airdate: 9/28/1989 - After recreating one of Cliff's adventures in college about washing the kitchen floor in a strange way, Theo and his roommates are kicked out of their apartment.

Denise Kendall: Navy Wife - Airdate: Airdate: 10/12/1989 - Denise forgets to respond to a letter from the Navy and confirm that she and Martin want housing on the naval base.

Theo's Gift - Airdate: 10/19/1989 - Theo is diagnosed with dyslexia, a learning disability which contributed to the academic problems he has had over the years.

Getting to Know You - Airdate: 12/14/1989 - As Christmas approaches, Cliff and
Martin start getting to know each other better.

Not Everybody Loves the Blues - Airdate: 2/1/1990 - Theo thinks about proposing to Justine.

Isn't It Romantic? - 2/22/1990 - Cliff, Elvin and Martin secretly compete to determine who the most romantic husband in the Huxtable family is and try to find the best gift but it has to be under twenty-five dollars.

Theo's Dirty Laundry - Airdate: 3/15/1990 - Cliff and Clair discover that Theo has moved in with Justine.

What's It All About? - Airdate: 3/22/1990 - Clair is burned out from work and family pressures and hurries off to a cabin resort Cliff's doctor friend suggested.

Off to See the Wretched - Airdate: 4/5/1990 - Vanessa and her friends sneak out of town to attend a concert in Baltimore, but encounter huge problems along the way. Afterwards, she must face the wrath of Cliff and an infuriated Clair.

The Moves - Airdate: 4/19/1990 - The Huxtable's next door neighbor Jeffrey Engalls reinvents himself after his divorce for a lovely friend of Clair's.

Season six is another great season and this DVD release is recommended.

TykeeshaReviewed in the United States on April 18, 2013
4.0 out of 5 stars
The Cosby Show Season 6
Verified purchase
Airing from September 21, 1989 to May 3, 1990, The Cosby Show Season 6 continued to show one of the most groundbreaking sitcoms in television history. The sixth season of Cosby Show starred Bill Cosby as Dr. Cliff Huxtable, Phylicia Rashad as Clair Huxtable, Sabrina LeBeauf as Sondra Huxtable-Tibideaux, Geoffrey Owens as Elvin Tibideaux, Lisa Bonet as Denise Huxtable-Kendall, Joseph C. Phillips as Martin Kendall, Malcolm-Jamal Warner as Theo Huxtable, Tempestt Bledsoe as Vanessa Huxtable, Keshia Knight Pulliam as Rudy Huxtable, and Raven-Symone as Olivia Kendall. Season 6 continued to focus on doctor Cliff Huxtable and his attorney wife, Clair, raising their five children in Brooklyn, New York. The children consisted of Sondra, who is married to Elvin Tibideaux and the mother of twins, flakey, weird Denise, who returns from a trip to Africa married to a naval officer named Lt. Martin Kendall with a 3 year-old stepdaughter Olivia (played by a small Raven Symone), greedy, 19 year-old Theo, who gets his own apartment but yet constantly invades the Huxtable house, rebellious 16 year-old Vanessa, and the youngest Rudy, who is now 10 years old and turns 11 later this season and is no longer the baby of the family. In season six, the Huxtables dealt with Vanessa experimenting with alcohol and sneaking off to Baltimore, Theo and his girlfriend Justine taking their relationship to the next level, Denise adjusting to being a single mother while Martin is away for weeks at a time and she aspires to be a teacher, Sondra and Elvin adjust to being parents, Rudy reports her first "boy trouble," and little Olivia learns the importance of family time. Recurring characters include Russell and Anna Huxtable (played by Earle Hyman and Clarice Taylor), Cliff's parents, Justine Phillips (played by Michelle Thomas), Theo's sharp-as-a-whip girlfriend, Peter (played by Peter Costa), the Huxtables' and neighbor and Rudy's friend, and Kenny aka "Bud" (played by Deon Richmond), Rudy's loud and chauvinistic friend. Season two was placed at #1 in the summer of 1986 in the Nielsen Ratings, marking the beginnings of the series five-year streak as the number one show in America. Season three was placed at #1 in the summer of 1987, season four was placed at #1 in the summer of 1988, season five was placed at #1 in the summer of 1989, and season six was placed at #1 in the summer of 1990, marking the endings of the series five-year streak as the number one show in America. On November 6, 2007, First Look Studios released on The Cosby Show Season 5 and The Cosby Show Season 6 on DVD. This is my review of Season 6. The show itself growns stronger this season as Olivia joins the show and Denise returns full-time. There are more guest stars again, including Sandman Simms and B.B. King. First Look has decided not to put any bonus features into the set... again! In seasons three and four, the set comes in three slim cases, one for each disc. This is the same for seasons five and six. Season six has peachish cases and the discs all look the same. They have a bland design which just has the show logo in peachish, reddish color. Disc 1 contains episodes 1-9. Disc 2 contains episodes 10-18. Disc 3 contains episodes 19-26. The menus are nice. The menus are red and play the season six theme song (a jazzy fast-paced theme). It is identical to seasons three and four. You can't play all of the episodes at once. You have to play them individually. There are 26 episodes this season. Here is a list of episodes:

Disc 1
Denise: The Saga Continues *
Surf's Up
I'm In with the 'IN' Crowd *
Denise Kendall: Navy Wife *
Theo's Gift
Denise Kendall: Babysitter *
Shall We Dance? *
The Day the Spores Landed *
Thanksgiving at the Huxtables *

Disc 2
Grampy and Nu-Nu
Cliff La Douce *
Getting to Know You *
Elvin Pays for Dinner
Cliff's Nightmare
Denise Kendall: Singles Counselor *
The Birthday Party *
Not Everybody Loves the Blues
Rudy's Walk on the Wildside *

Disc 3
Mister Sandman *
Isn't it Romantic? *
Theo's Dirty Laundry
What's It All About?
Off to See the Wretched *
The Moves
Live and Learn *
The Storyteller

Nicole CloughReviewed in the United States on December 30, 2011
4.0 out of 5 stars
Cosby Show Fan
Verified purchase
I enjoy showing our girls the Cosby Show and they enjoy it as much as I do. I try to see how much I know about Cosby by playing Cosby Trivia games, and also creating some of the questions. My only issue with these DVD's is the fact that there is not "play all episodes" button. You have to select each episode one at a time which does not help when the girls are watching it in the van; they are too young to work the remote. All-in-all I would highly recommend these DVD's to anyone who is new to the Cosby show or an old veteran like me. Enjoy!

Granny MaryReviewed in the United States on January 2, 2008
5.0 out of 5 stars
Cosby all the way!
Verified purchase
I am enjoying this DVD series so much because these are the complete episodes and I watch it all the time. The only problem is that I have to keep starting each episode; they don't play straight through and that can be a problem if I'm in the middle of something. Other than that, this is the one season that I didn't think I'd enjoy, but it's great.
4 people found this helpful

Positively Taking CareReviewed in the United States on February 16, 2022
5.0 out of 5 stars
good video quality
Verified purchase
Love that show can be downloaded and viewed without wi fi connection
See all reviews
Back to top
Get to Know Us
Make Money with Us
Amazon Payment Products
Let Us Help You
EnglishChoose a language for shopping. United StatesChoose a country/region for shopping.
© 1996-2022, Amazon.com, Inc. or its affiliates