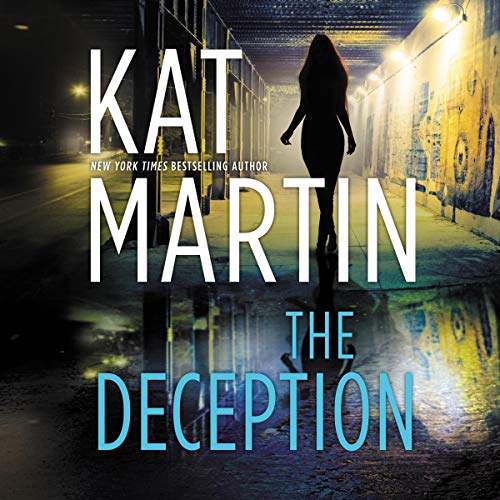 "Fans of romantic suspense won't be able to put this book down until the final page is turned." (Publishers Weekly on The Deception)

When missing turns to murdered, one woman's search for answers will take her to a place she never wanted to go....

After searching for her sister for two long years, Kate Gallagher is devastated when she's called to the morgue to identify Chrissy's body, the runaway teen the victim of a brutal attack. Guilt and grief send Kate into a tailspin. She failed Chrissy once...she won't do it again. Even if finding her sister's killer means following a lethal bounty hunter into the heart of darkness, placing both their lives in danger.

Working at Maximum Security has taken Jason Maddox down some dangerous paths, but never for a client he's so drawn to, or for a case so monstrous. As clues lead them deeper into the city's underbelly, connections to human trafficking draw them closer and closer to peril, but even Jase's warnings can't convince Kate to walk away. As the deadly operation puts a target on their backs, they'll have to decide what matters most: the truth...or their lives.

Amazon Customer
5.0 out of 5 stars 5 Star Deception
Reviewed in the United States on September 10, 2019
She searched for two long years, but now Kate Gallagher has been called to the morgue to identify her sister’s body. Guilt and grief send Kate into a tailspin but she won’t fail her sister again, even if finding her sister’s killer means following a lethal bounty hunter into the heart of darkness, placing both their lives in danger. Jason Maddox has been down some dangerous paths before, but never for a client he’s so drawn to, or for a case so monstrous. The deeper into the city’s underbelly they go, the deadlier the operation becomes, placing a target on the backs and they will have to decide what’s matters most…the truth or their lives.This ‘Maximum Security’ suspense story is an intense, emotionally gripping and riveting tale. The characters stand out and speak to readers as they dive deeper and deeper into a world of horror while dealing their vivid sizzling chemistry and magnetic attraction. The romance between them is full of danger and emotional angst due to situation, but it is obvious to readers that these two are belong together and readers can’t help but become caught up in their story as they empathize with what they are going through.The story is set at a steady pace with the suspense building continuously and some fast paced and adrenaline pumping excitement happening as Jason and Kate’s mission draws them closer and closer to the answers they seek and the target on their back becomes exponentially more deadly. Lots of unexpected twists keeps readers on the edge and the heroine of the story is strong with some surprising attitudes that makes her a perfect fit for a lethal bounty hunter. Once again, the author has given her fans a juicy, gut clenching and riveting suspense that they can take their eyes off of.
Images in this review

Vicky C
5.0 out of 5 stars Love Kat Martin books
Reviewed in the United States 🇺🇸 on January 12, 2023
Verified Purchase
Started reading the Kat Martin book Last Chance after winning it through goodreads! If you haven't read the blood ties series you need to! Once I finished those I started the Maximum Security series and so far they haven't disappointed.
Read more
Helpful
Report abuse

Tricia J. Majors
5.0 out of 5 stars pageturner
Reviewed in the United States 🇺🇸 on November 23, 2022
Verified Purchase
This book was so amazingly good. I could not put it down. It was a real page turner. I can’t wait to read the next book.
Read more
Helpful
Report abuse

P. Blevins
5.0 out of 5 stars Wonderful
Reviewed in the United States 🇺🇸 on October 17, 2019
Verified Purchase
The Deception: Maximum Security Book 2 is by Kat Martin. This book is definitely one of Kat’s best books. This book deals with prostitution and sex-trafficking. It also deals this those who try to work to try to stop this problem.
Kate Gallagher has searched for over two years for her little sister who ran away when she was sixteen. Kate had left the search up to the police for the first two years; but now took it upon herself. Then, she received the call she dreaded, her sister was dead and she was asked to come down and identify the body. It wasn’t something Kate wanted to do; but she had to. Now she was determined to find the person who beat her sister to death. She had failed to find and help Chrissy; but she wouldn’t fail now. She set out to hire help and went to Maximum Security. Here she met Jason Maddox. She realized she had met him at the Sagebrush Saloon the night she identified Chrissy’s body and had almost gone home with him. Now, she was to work with him? To find Chrissy’s murderer, she knew she had to. However, she would be fully involved in the investigation.
Jason Maddox, also known as Hawk, had gone to the Sagebrush Saloon and had seen Kate. He was completely taken with her and ended up making out with her in his SUV. Unfortunately, they were interrupted by others going to their cars and his intention of having her in his bed was thwarted. He knew he might have a second chance when she entered the Maximum Security offices. That was, until she hired him to find her sister’s murderer. Use to working alone, he was not thrilled to find she wanted to be completely involved with the investigation and was stubborn enough to keep on until she won. Although it made his job harder since he had to worry about her, he was glad it gave them more time together to get to know each other. Could he find her sister’s murderer and win over the lady at the same time?

Patti Lucas
5.0 out of 5 stars The Deception is an Outstanding Story
Reviewed in the United States 🇺🇸 on September 14, 2019
Verified Purchase
The Deception by Kat Martin is the second book in the Maximum Security series. The Deception is an outstanding story and Kat Martin is an amazing storyteller. The Deception is the story of Kathryn "Kate" Gallagher and Jason "Hawk" Maddox, bounty story. The story begins with Kate identifying the body of her runaway younger sister Christina "Chrissy" at the Dallas morgue. Kate is guilt ridden and goes to the Sagebrush Saloon to forget about it. She encounters Jason at the bar and on the dance floor. They get into the back seat of Jase's Yukon, but "Just Kate" puts and end to things before they get to far. Kate wants to learn what happened to Chrissy and after doing internet research, decides to hire Chase Garrett at Maximum Security. When she arrives at Maximum Security, Kate encounters Jase and he offers to help her find out what happened to Chrissy. They soon learn that Chrissy was murdered and had a red lipstick tattoo behind her ear, marking her as the property of Los Besos. Chrissy was a teenage prostitute going my Tina Gallen and was trying to clean up her life at New Hope Rehabilitation Center. Working together is both dangerous to Kate and Jase's hearts and lives. There are multiple surprise plot twists that only Kat Martin can deliver, and I loved everyone of them. The book is filled with action, danger, and of course romance. I loved every page of The Deception and how it all came full circle at the end. Cannot wait for Brandon Garrett's story in book three.
Read more
4 people found this helpful
Helpful
Report abuse

Joy De
4.0 out of 5 stars Hot and intriguing
Reviewed in the United States 🇺🇸 on March 31, 2022
Verified Purchase
This is a fun adventure with a really hot bounty hunter. I like the heroines spunk. It did drag on a little too much though.
Read more
Helpful
Report abuse

Patricia Brazil
5.0 out of 5 stars As always great!
Reviewed in the United States 🇺🇸 on February 20, 2022
Verified Purchase
I have loved Kat Martin ever since I stumbled on to one of her books! Ever since I always look for the next book! Loved the characters! Been following these guys since they started out on the ranch! Always have a hard time putting her books down!
Read more
Helpful
Report abuse

Loves Fiction
5.0 out of 5 stars Great Story!
Reviewed in the United States 🇺🇸 on August 5, 2021
Verified Purchase
I truly enjoyed this story, I had a difficult time getting past the first chapter, the viewing of her sister, her grief and I just found it difficult for me. However, Kate the heroine and Jason the hero were a great team. I loved the storyline, which was truly multi-layered and with a very good side characters. The bonus novella at the end was great. Highly recommend the “Maximum Security” series by Kat, she is an excellent author.
Read more
One person found this helpful
Helpful
Report abuse

Jacquie Hamilton
5.0 out of 5 stars Great book
Reviewed in the United States 🇺🇸 on May 6, 2020
Verified Purchase
The Deception is the second book in the Maximum Security series and is the story of Kathryn Gallagher and Jason Maddox. Kate has to identify the body of her runaway younger sister Chrissy at the Dallas morgue. She has been searching for her for the past two years and is devastated by the news.. Kate wants to learn what happened to Chrissy and decides to hire Maximum Security. Jason is there and he offers to help her find out what happened to Chrissy. They soon learn that Chrissy was murdered by human traffickers that go by the name Los Besos and work together to bring these people to justice. Full of adventure, danger and romance. A great read.
Read more
3 people found this helpful
Helpful
Report abuse
See all reviews

jd66
5.0 out of 5 stars awesome book
Reviewed in the United Kingdom 🇬🇧 on October 23, 2022
Verified Purchase
Another fabulous book in this ongoing series. I love the drama, suspense and intrigue in these stories. The characters are all different but blend perfectly with each other. The narration was amazing too. Can’t wait to read and listen to the next book now
Read more
Report abuse