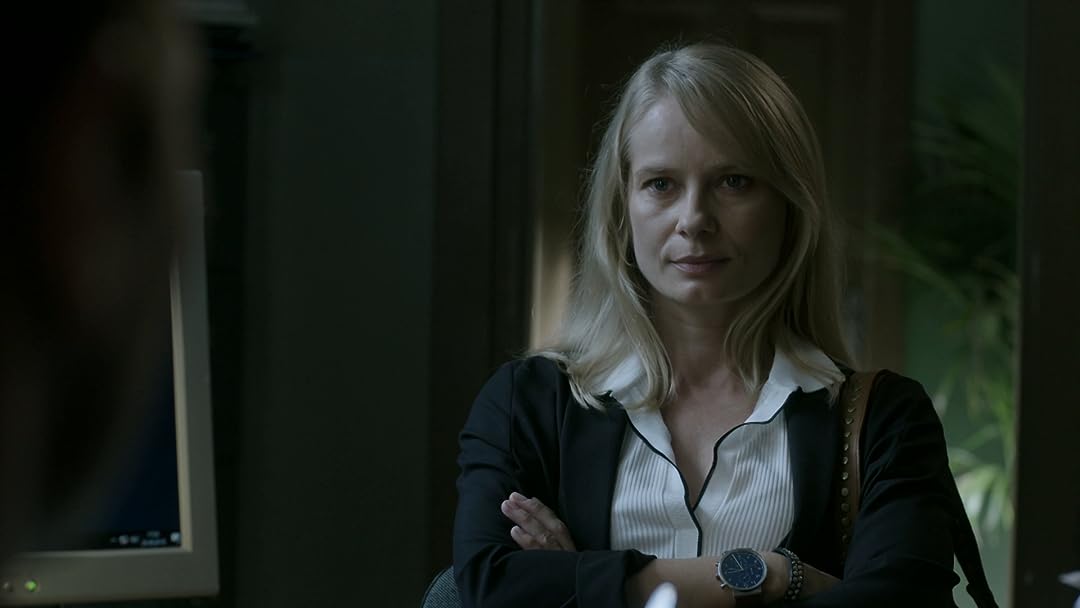 (26)
2021TV-MA
Three-year-old Nikola Szlezyngier disappears in unexplained circumstances and her parents Angelika and Dawid are the main suspects. Angelika contacts an old friend Joanna Chylka, a brilliant, cynical and successful lawyer to help. With her new apprentice Kordian, Joanna will try to bring the case to a happy close. From Walter Presents, in Polish with English subtitles.

YuriasianReviewed in the United States on November 3, 2021
2.0 out of 5 stars
Suspension of disbelief isn't enough. Drowning your IQ in a bathtub might work.
Very lush production values, big budget, stylish direction. Underlying plot is engaging and credible, good continuity. Acting is very good, clearly accomplished and for the most part animating characters with authenticity. However, the lead character as written and played sabotages everything. It's not the lead actress' fault but she is cast as a caricature of an alpha male lawyer who's a hunk sex machine, drinks hard swears a lot, and flouts manners, traffic laws, civility while winning cases with wisecracks and legerdemain. The main character is a cartoon and really undercuts what otherwise would be a good series. The Polish film sector is sophisticated and highly respected and that experience shows in this production. So why tack on a lead character who sucks out all the oxygen in every scene because it's all about her instead of a compelling story? Maybe other folks won't be bothered by any of this. But for me it felt like Beethoven's fifth played on a kazoo. It may be Beethoven but that kazoo doesn't quite do it justice.

Watch the first episode. If it glides by then this may be a satisfying series to watch. It lost me when the main character struts into the crime scene mainly to flaunt a cavalier attitude, not bothering to first ascertain why her clients are the main suspects or at least be briefed by the police about the suspected crime. If you think that's how successful women attorneys act, go for it. There's a lot worse out there.

hawthorne woodReviewed in the United States on September 4, 2021
5.0 out of 5 stars
Loving it!!!!
It took me about fifteen minutes to get into this. At first, I thought it was too "fast" - moved too fast, a bit dark visually, so hard to see it all. But I was intrigued by the incredibly competitive and self-assured (and gorgeous) lead defense attorney in the first season's opening story. Then the story unfolded and I was...and still am...hooked. Just wanted to let anyone who likes smart, unfolding drama, wit and action - with a good dollop of mystery woven in so you never know what's coming next and it's always a surprise - then this is for you. The acting's fantastic, characters highly amusing and smart. Go for it. You won't be disappointed.
9 people found this helpful

FasterpussycatReviewed in the United States on October 10, 2021
4.0 out of 5 stars
Exciting Who-Done-It
An exciting and engaging who-done-it. Billed more as a trial drama, it's focused less on trial procedure than on pure plot, and it's a fairly complex plot. Not so complex that you won't figure it out, but the ride is interesting enough to keep you watching. It's more of a why-done-it, to be honest. The two main characters - the lawyer (Chylka) and her trainee - are compelling and watchable (and even somewhat likeable in their own flawed ways). What you see of legal procedure in Poland is also intriguing. The show doesn't linger in the courtroom too long, which I appreciate as I often find all of that boring. They show _just_ enough. All the supporting actors were well chosen, though the actor playing the prosecutor could have been put to better use. A provocative character, I'd have loved to know what motivated him and a bit of what he was thinking. Same with the police investigator. But we aren't shown any of that. I also wish we'd learned a bit more about Chylka's internal life and background - we only get tantalizing glimpses - but maybe that will come. The ending seems to set up the characters for a season 2, and I sincerely hope there is one. Recommended to those who like this genre and any of the following: thrillers, crime & punishment, legal dramas, unconventional female characters.
6 people found this helpful

ImaReviewed in the United States on September 20, 2021
1.0 out of 5 stars
Lacking something...
So, as many of us here, I too, love the genre of international mysteries. This one was lacking something. It had potential to be better than this, but I felt the main actress played an annoying role, of an out of control lawyer. Her attitude, her drinking, her language, all took away from that potential. That arrogant attitude offered nothing to the plot. It rather, took away. I did something I have never done before: after the third episode, I skipped all others and watched the half last episode just to know the end, because it became boring to me.
7 people found this helpful

ReeseReviewed in the United States on September 3, 2021
5.0 out of 5 stars
Simply the Best
Intriguing, riveting, sign me up
8 people found this helpful

Marilyn JenettReviewed in the United States on January 12, 2022
5.0 out of 5 stars
Deserves More Viewers...and Reviews
I'm sure this series will pick up steam once more people find it. It really is good in every way and very entertaining. The talent, production and pace maintain your full attention and yes, it's binge-worthy. (I'm binging and half way through Season 2 - can't stop now!).

A couple of low reviews brought the rating down - claims it's "unrealistic." I say, if you want every detail to be realistic, watch a documentary. If you want to be truly entertained, watch this show.

Thanks to Walter Presents for so many great shows. Hollywood can learn great lessons from these international gems.
3 people found this helpful

Todd M.Reviewed in the United States on January 6, 2022
4.0 out of 5 stars
An arrogant lawyer… even in Poland!
Joanna Chylka is not only arrogant but she’s very self-impressed and has never lost a case. To say this season is convoluted would be an understatement and there’s no shortage of long shots… especially driving… to drag this one on about three more episodes than required. It would have been better as a mini-series but the casting, acting and insights into Polish law were enough to keep it moving. They also did it without an sex scenes or nudity but they seem to be making up for that in the second season. It’s more of a whodunit and everyone seems guilty of something if not being blamed for the missing child. I can’t say the translation for the subtitles is perfect because my knowledge of Polish pretty much ends with perogies and they translated that to dumplings. Good enough to want to see the second season but some patience and brain disengagement is required for the first one.There is a scene about cigarette smuggling that is not to be missed.
One person found this helpful

MOO MOOReviewed in the United States on September 7, 2021
5.0 out of 5 stars
draws you in and raises your pulse
I didn't want to like this. The lead is initially portrayed as almost a parody of the beautiful, brilliant, ambitious, no holds barred attorney with a questionable moral compass. But by the second episode, I was hooked. She dropped her spike heels and got down to business. Twists and turns, some violence, in the plot line with excellent performances and good script. Like a good novel that you can't put down. I'm also a sucker for well-written procedural dramas and court scenes. There is a lot of profanity, so if that offends you to the extent you don't want to watch, leave this off your list.
4 people found this helpful
See all reviews
Back to top
Get to Know Us
Make Money with Us
Amazon Payment Products
Let Us Help You
EnglishChoose a language for shopping. United StatesChoose a country/region for shopping.
© 1996-2022, Amazon.com, Inc. or its affiliates