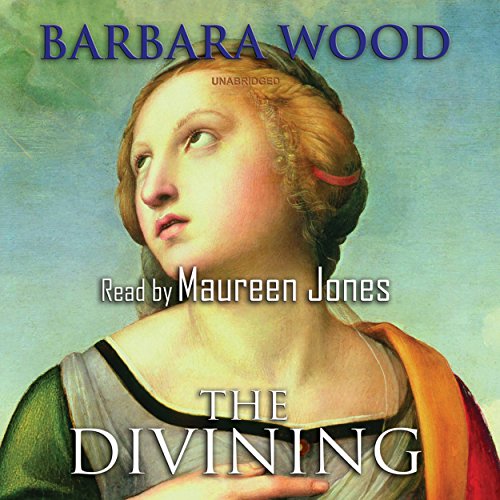 Ancient Rome, 54 CE. Nineteen-year-old Ulrika is plagued with strange visions and dreams. In order to discover the truth behind her past and her unusual powers, Ulrika embarks on a dangerous journey to her father's homeland, Germania. There she discovers her calling, a rare gift known as the Divining.

Sent on a quest to find her destiny, she travels far and wide, from ancient Germania to the vast and exotic countries of Syria, Babylon, and Persia. Along the way she meets wise spiritual guides - men, women, and spirits alike - who teach her to harness her ability to heal and protect others.

Ulrika's journey also brings her close to the handsome trader Sebastianus Gallus, who must depart for his own quest to the Far East to gain riches for the powerful emperor Nero. But can Ulrika reunite with the man she loves, fulfill her profound destiny, and usher in a new era in Rome under the threatening rule of Nero?

Enjoy a free audiobook + more
Learn more about Membership
List Price: $27.97
You Save: $3.50 (13%)
By completing your purchase, you agree to Audible’s Conditions Of Use
Sold and delivered by Audible, an Amazon company
Share

4.3 out of 5 stars
4.3 out of 5
39 global ratings
How are ratings calculated?
To calculate the overall star rating and percentage breakdown by star, we don’t use a simple average. Instead, our system considers things like how recent a review is and if the reviewer bought the item on Amazon. It also analyzes reviews to verify trustworthiness.
Top reviews

MissyC
2.0 out of 5 stars A Disappointing Sequel
Reviewed in the United States on November 13, 2017
Verified Purchase
I have just started reading the Divining and I am so disappointed by this book. Having read Soul Flame many times, I always hoped for a sequel that would chronicle Ulrika's journey to find her father. While The Devining is a tale that does exactly that, it is a very different story than what happened in Soul Flame. So many critical elements and characters have been left out. The writing feels "off". It's as if Barbara Wood has given up and threw together a sequel to appease her fans, thinking no one would notice everything that was left out from the first book. I'm not sure if I will end up finishing the entire book, it's a huge letdown after Soul Flame.
Read more
Helpful
Report abuse

Georgia Filippidou
1.0 out of 5 stars Disapointed and dropping it
Reviewed in the United States on January 24, 2017
Verified Purchase
I read Soul Flame many years ago and loved it. I wished for a sequel, because I wanted to see what happens to Ulrika, her love interest Eirik and her father Wulf. So I was excited to find out that such a sequel actually did exist.
I started reading eagerly, but soon discovered that something was off. The story was slightly different from Soul Flame. Eirik was not mentioned at all, which was weird. Until at about the 20% mark we finally learn that Ulrika never had known the touch of a man and never had sex. Huh? So Eirik never happened, I guess?
Altering the story of the first part is definitely not ok for a sequel.
Is it fair to give it only one star just because when reading the synopsis I assumed that the ''but can Ulrika reunite with the man she loves'' refers to the man she loves in the first book and not to this ''handsome trader Sebastianus Gallus, who must depart for his own quest to the Far East'' from the sentence before? Maybe not.
Read more
Helpful
Report abuse

WitchesBrew1694
5.0 out of 5 stars Barbara woods finest book
Reviewed in the United States on November 26, 2012
Verified Purchase
Personally I read lots of history based fiction or books based on true events or people. I have read this book several times already and would say Wood has the talent of her predecessors such as Anne Seton and K. Windsor. I would highly recommend this book to anyone who reads philippa Gregory, historical fiction, or loves history in general. This book takes place in Rome during the beginning of Nero's reign, obviously not a great time for Rome, however Wood does a fantastic job as always describing how people lived and their culture. I've recommended this book to my friends, mother and grandmother. Id love a personally signed copy.
Read more
2 people found this helpful
Helpful
Report abuse

Melissa
2.0 out of 5 stars I don't understand all the good reviews.
Reviewed in the United States on June 2, 2014
Verified Purchase
This is not Barbara Wood's best book, and I've read most of her stuff. I read this before Soul Flame, not realizing it was a sequel. You don't need to read Soul Flame to appreciate The Divining, but I recommend reading it anyway because it is SO much better than this book. It's not terrible-there are dual quests in which some exiting things happen and some good historical detail, but...it's just so predictable. And I worried at times that I was reading a children's book; the author can't seem to say "there were columns" but instead "Ulrika saw columns," which is fine except that every sentence reads like that until you've seen the name Ulrika twenty times on a page.
Read more
One person found this helpful
Helpful
Report abuse

LMS
5.0 out of 5 stars Excellent
Reviewed in the United States on October 15, 2015
Verified Purchase
Barbara Wood is an amazing writer, I have enjoyed all of her books, she weaves historical times and way of life with intrigue and suspense. I have never been disappointed with her books, highly recommend.
Read more
Helpful
Report abuse

H.L Davis
5.0 out of 5 stars The best author ever
Reviewed in the United States on January 17, 2013
Verified Purchase
Barbara Wood is the best uthor ever, I have read every book she has ever written ,I have never be disappointed, her characters are so real, it is almost like she would have to have lived in the time her characters lived, so much history and detail,I love her books ,just wish there were more of them...if you love good ,really good books ,you will love all her books.
Read more
Helpful
Report abuse

pagusa
4.0 out of 5 stars It is a sequel
Reviewed in the United States on May 17, 2013
Verified Purchase
When I bought it, I did not know it was a sequel of Soul Flame ....but you can read it even if you have not read the first one . I liked it very much but found it a bit slow, that is why I only gave her four stars. I love Barbara Wood and will continue reading her books, I have read seven or eight and have enjoyed every single one of them.
Read more
Helpful
Report abuse

Carol Lavoie
5.0 out of 5 stars Fabulous fast and intriguing read
Reviewed in the United States on April 7, 2015
Verified Purchase
i love barbara wood and ahve every book that she ever wrote, even the very early ones! she's a superb talented writer who researches so much of her information before telling her tales. Definitely recommend all other books.. this one is wonderful.
Read more
Helpful
Report abuse
See all reviews

Kindle Customer
5.0 out of 5 stars Beautifully written.
Reviewed in the United Kingdom on May 6, 2013
Verified Purchase
I have read a number of Barbara Woods books and this one doesnot dissappoint. She writes well about strong Women and this one has the added interest of the era that it is set in. Sympathetically described, with the edge of mystery and intrigue I found it a very enjoyable book and have already recommendeed it to quite a few frieds.
Read more
One person found this helpful
Report abuse

Kindle CustomerNorm
5.0 out of 5 stars I dare you not to read this
Reviewed in the United Kingdom on February 6, 2014
Verified Purchase
This book is one of the best I have read in many years I could not put it down I got no sleep till I finished it
Read more
One person found this helpful
Report abuse

Mary
4.0 out of 5 stars Great Escapism and grasp of history
Reviewed in the United Kingdom on May 17, 2013
Verified Purchase
I enjoyed this novel very much although it had some similarities to another " Healing " novel by her.. i will ask our library to stock it as I find she is not so widely known in the UK.
Read more
One person found this helpful
Report abuse