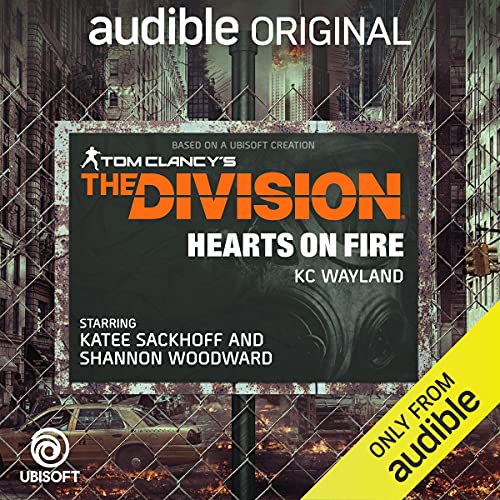 The Division: Hearts on Fire

List Price: $21.81
You Save: $2.73 (13%)
By completing your purchase, you agree to Audible’s Conditions Of Use
Sold and delivered by Audible, an Amazon company
Share

Rebecca Ford
5.0 out of 5 stars Wow! I loved it!
Reviewed in the United States on September 24, 2021
Tom Clancy's The Division Hearts on Fire by KC Wayland is such a great story. The story didn't seem rushed but the time flew by and I was sad when it was over. The sound effects were the best. It gave an immersive experience that was so far above other audio books. Great job everyone!
Read more
Helpful
Report abuse
See all reviews
Back to top
Get to Know Us
Make Money with Us
Amazon Payment Products
Let Us Help You
EnglishChoose a language for shopping. United StatesChoose a country/region for shopping.
© 1996-2021, Amazon.com, Inc. or its affiliates