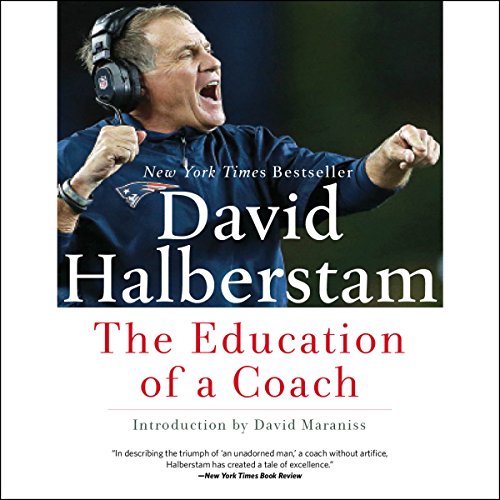 The Education of a Coach

4.6 out of 5 stars
4.6 out of 5
294 global ratings
How are ratings calculated?
To calculate the overall star rating and percentage breakdown by star, we don’t use a simple average. Instead, our system considers things like how recent a review is and if the reviewer bought the item on Amazon. It also analyzes reviews to verify trustworthiness.

Richard of Connecticut
5.0 out of 5 stars One of the best writers in America does it again!!!
Reviewed in the United States on November 9, 2006
Verified Purchase
This is the same author that wrote the "Best and the Brightest", a book that I read decades ago, that is even more compelling today in view of our country being stuck in Iraq, which is not all that different than Viet Nam. That book was the story of the men that John F. Kennedy chose to accompany him on that magnificent journey of a 1000 days, a journey that ended in the sad destruction of Lyndon Johnson's administration. Whatever subject Halberstam chooses to write about becomes compelling after reading just a few lines of the book.

Here he tackles the subject of Bill Belichick, head coach of the New England Patriots, and how this man has created a sports dynasty in an age where all the rules were designed to discourage such a creation.

The author's words flow like poetry. Even if you are uninterested in the subject of the book, it is still compelling. There are a number of reasons to read a book like this, which may be far removed from your own area of expertise, and even normal interest.

Great learning sometimes involves people going outside their expertise. In doing so, it can make for great discoveries, and finding a fascinating idea or concept that a person would never think of for themselves in their daily work. Whether that work is being a Nobel Prize winning researcher in string theory, or a gent that builds cars, the bottomline always seems to be the same. These people can then bring these new ideas, and learnings into their own circle of competence, and appropriate it for what it is they are doing on a daily basis.

In this book, you learn about getting the edge on your fellow competitors. You learn about dedication, focus, and execution. We may talk about execution in business, but in business or government, it might take years before you know the results of the project you are working on. Not so in the world of sports. You make an adjustment on a football team like Coach Belichick, and you might know in 30 seconds if you look STUPID.

Usually wherever I am I have a selection of books with me. I read on average, about a book a day. Fortunately, my work allows me this luxury. Actually when I think about it, I am better at my work for the reading than if I did something else. This is probably true for you also. We read because we are compelled to read. I read the Education of a Coach while flying cross-country, and literally couldn't put it down, that's how Halberstam GRABS you as a reader.

What is absolutely fascinating to me is Coach Belichick learning at his father's knee about football. The father was a scout who really did not make it as far as he should have in the world of football. He did have a studious and willing son who is the subject of this book. The child was desirous of learning everything his father could teach him. I am reminded in many ways of the relationship that Tiger Woods had with his own father.

Just listen to a few words that Halberstam writes of the values that the father instilled in the son, "You worked hard. You saved. You did not waste anything. If possible, you grew your own food. You did not complain. You did not expect anyone to do anything for you. Discipline was not so much taught as it was lived, as an essential part of life for which there was no alternative."

This is reading folks, compelling reading. Learn how a masterful football coach learned the game, and taught a team how to play the game. This is the real thing, and Halberstam is at his best, when writing about what's real. You will love this book, even if you don't like sports.

David A. BaerTop Contributor: Cycling
TOP 1000 REVIEWERVINE VOICE
5.0 out of 5 stars Touchdown!
Reviewed in the United States on February 18, 2007
Verified Purchase
When David Halberstam stops writing about sports--God delay the day--he will go down as one of the great English-language sportswriters of all time. Rarely does a writer on serious topics, and he writes on sport as a most serious enterprise, excel in such varied genres as political history ('The Best and the Brightest') and sport.

This first deployment of the author's considerable skills on American football is the literary equivalent of a successful Hail Mary pass. Offered late in the game with but perhaps one chance to win the battle, a high-risk throw is tossed into the air with the hope that somebody down there might make the unlikely victorious grab.

Bill Belichick, the now-legendary head coach of the New England Patriots teams that dominated the NFL at the midpoint of the new century's first decade, comes under Halberstam's gaze. This cerebral, obsessively disciplined anti-celebrity with his passion for building a team on good value from the ground up is not at first glance a compelling subject for a professional biography. Yet Halberstam's gift is for discerning just how a key persona decided to move against the grain of a profession's received wisdom without necessarily calling attention to his methodological heresy.

Quietly building up 'Belichick University' while traversing the serial failures that are the calling card of professional coaching and coaches, Coach Belichick built a different kind of team and did the Thing that can almost not be imagined: he changed the NFL.

As he tells the story, quickly convincing his reader that it is a fascinating tale that merits his readers attention even as civil wars, terrorist alarm, and global warming conspire to argue that sport is an irrelevance, Halberstam scatters observations and knowing turns of phrase that leaders of any profession are likely to find invaluable.

Even if you thought the Patriots were a missile defense system, read this book.
Read more
2 people found this helpful
Helpful
Report abuse

Lonnie
3.0 out of 5 stars Eeah. Not worth anything and i'm a BB fan.
Reviewed in the United States on February 1, 2018
Verified Purchase
Okay. Kind of boring. I was excited to read this book about BB. Not his dad. His dad was a big influence obviously but it went on for way to long. Could barely finish the book. The thing about BB is his mystique, I was hoping to learn more about him in this book. Nothing to deep.
Read more
3 people found this helpful
Helpful
Report abuse

Robyn A. Chumley
5.0 out of 5 stars Not a Patriots Fan, But...
Reviewed in the United States on September 28, 2020
Verified Purchase
...Found Halberstam’s insight easing my searing dislike of this stiff, sweatshirt-wearing coaching genius. I think I now respect Belichick because of reading this. Great writing on the passion—the familial devotion—it takes to be a football coach. Highly recommend.
Read more
Helpful
Report abuse
See all reviews

Rallycross Fan
5.0 out of 5 stars Education of a (Genius) coach!
Reviewed in the United Kingdom on March 20, 2010
Verified Purchase
Education of a coach gives a view of a very private man that few get to see or witness. Well known in the NFL for his understanding of the game, coaching ability, use of the salary cap and his way of neutralizing other teams' strengths, Bill Belichick is seen by many as the greatest coach of the modern NFL era. Also well known for his remarks and tight -lipped attitude to the press, he is often misunderstood by many, both within the NFL and by the public at large.
This book opens the lid on the man - from his up-bringing and family, through to his success and failures in football. A very enjoyable and easy read which allows you to see the man in a new light! A highly recommended book for any supporter of the NFL (not just Patriots fans!).
Read more
2 people found this helpful
Report abuse

Jerapah
4.0 out of 5 stars Enjoyable and interesting
Reviewed in the United Kingdom on February 11, 2017
Verified Purchase
Even as a Raiders fan, there was much to enjoy.
Read more
Report abuse

Amazon Customer
5.0 out of 5 stars Highly recommend
Reviewed in the United Kingdom on April 11, 2019
Verified Purchase
Arrived promptly with no damage, exactly as you would expect
Read more
Report abuse

Jerry Y H Lee
5.0 out of 5 stars excellent read by excellent writer
Reviewed in the United Kingdom on May 17, 2015
Verified Purchase
A must read for any serious football fan, Halberstam is an excellent sports writer well researched and writes in a way that connects the reader to the story
Read more
Report abuse
See all reviews
Back to top
Get to Know Us
Make Money with Us
Amazon Payment Products
Let Us Help You
EnglishChoose a language for shopping. United StatesChoose a country/region for shopping.
© 1996-2021, Amazon.com, Inc. or its affiliates