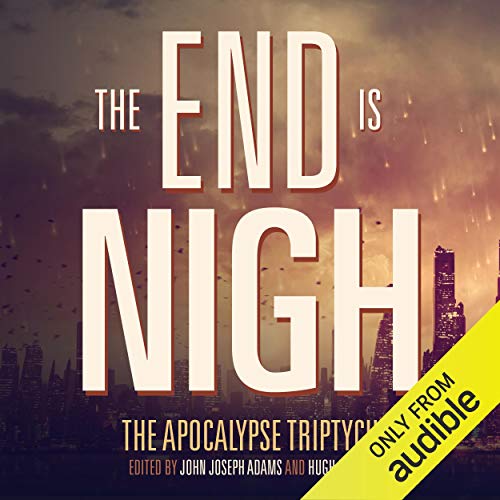 The End is Nigh: The Apocalypse Triptych

Famine. Death. War. Pestilence. These are the harbingers of the biblical apocalypse, of the End of the World. In science fiction, the end is triggered by less figurative means: nuclear holocaust, biological warfare/pandemic, ecological disaster, or cosmological cataclysm.

TABLE OF CONTENTS: Introduction by John Joseph Adams | The Balm and the Wound by Robin Wasserman | Heaven is a Place on Planet X by Desirina Boskovich | Break! Break! Break! by Charlie Jane Anders | The Gods Will Not Be Chained by Ken Liu | Wedding Day by Jake Kerr | Removal Order by Tananarive Due | System Reset by Tobias S. Buckell | This Unkempt World is Falling to Pieces by Jamie Ford | BRING HER TO ME by Ben H. Winters | In the Air by Hugh Howey | Goodnight Moon by Annie Bellet | Dancing with Death in the Land of Nod by Will McIntosh | Houses Without Air by Megan Arkenberg | The Fifth Day of Deer Camp by Scott Sigler | Enjoy the Moment by Jack McDevitt | Pretty Soon the Four Horsemen are Going to Come Riding Through by Nancy Kress | Spores by Seanan McGuire | She's Got a Ticket to Ride by Jonathan Maberry | Agent Unknown by David Wellington | Enlightenment by Matthew Mather | Shooting the Apocalypse by Paolo Bacigalupi | Love Perverts by Sarah Langan.

4.2 out of 5 stars
4.2 out of 5
273 global ratings
How are ratings calculated?
To calculate the overall star rating and percentage breakdown by star, we don’t use a simple average. Instead, our system considers things like how recent a review is and if the reviewer bought the item on Amazon. It also analyzes reviews to verify trustworthiness.
Top reviews

J. Aaron Bellamy
4.0 out of 5 stars A good strong start
Reviewed in the United States on February 11, 2015
Verified Purchase
As far as collections go, the End is Nigh is one of the better non-best-of-year ones that I’ve read. The stories are consistently good, with no outright fails, and many that stand out as exceptional. Conceptually, the Apocalypse Triptych, of which the End is Nigh is volume one, is ingenious. I especially liked the promise that several of the authors would have stories in the other two volumes, detailing the ‘during’ and ‘after’ timelines. However, this backfired somewhat… though not abysmally so, but at times I was indeed bothered. I haven’t read the others in the triptych yet (and I do plan to) but several of the stories here have such a clear lack of resolution that they feel incomplete. I have no problem with a good Flash Gorden-esque cliffhanger, and some go that route, but others just kind of stop, as if a longer story had been divided into three volumes. I feel nitpicky pointing this out, but I think it’s important to acknowledge. In the long run, I may double back and decide that, in fact, judging the triptych as a whole, this turned out to be very effective, but as a single volume, some of the stories are simply incomplete. To end on a positive note, I wanted to highlight some of the stories I enjoyed the most. ‘Shooting the Apocalypse’ by Paolo Bacigalupi has an impressive style, creepy but tangible, and a setting simultaneously unique and familiar. ‘Love Perverts’ is definitely perverted, and I hope Sarah Langan has another story in the next volume, she must! ‘The Fifth Day of Deer Camp’ by Scott Sigler is absolutely a day time read, unless you plan on waiting out the night armed by a boarded up window. And ‘BRING HER TO ME’ by Ben H. Winters covers territory I haven’t ever read before, and I hope and expect to see more of him later in the triptych as well. All said and done, this is a good solid start to a great idea. John Joseph Adams and Hugh Howey did not let me down.
Read more
3 people found this helpful
Helpful
Report abuse

Tom
5.0 out of 5 stars A Must Read
Reviewed in the United States on March 1, 2014
Verified Purchase
This collection of stories is one of the best anthologies that I've ever read and the idea of stringing three books together into a triptych is brilliant. This book is the first in a set of three book dealing with the apocalypse, this one containing stories specifically leading up to the end and the next two with stories taking place during and after. Every story in this collection brought me to a new view of the upcoming end to the world. Even though a few of the stories have a similar method of ending the world, every story was pleasantly unique. The real greatness of every story in this collection comes from the people in the stories and how they react to their unique situation. Every story left me wanting to know what happened next. Fortunately, many of the authors are doing continuations of their stories in the subsequent books. I'm hesitant to share anything specific about the stories for fear of spoiling anything. The joy of reading this book is, starting a story knowing the world is going to end for the people you are reading about,but not knowing how it will happen or what they will do.
Read more
47 people found this helpful
Helpful
Report abuse

GK1292
3.0 out of 5 stars A few hits and a few misses
Reviewed in the United States on September 2, 2018
Verified Purchase
A myriad of end of the world stories.
Some were very good, thought provoking. New ideas or different takes on older ideas.
Others were meh, at best.
A few, in the name of PC/inclusiveness tried to put those aspects into their stories. If the stories were longer, that aspect may of added something in character development or relationship interaction.
Unfortunately, for the most part, it did little or nothing to help the story. One story was very good right up to the end . . . and then the author added a PC/inclusive line, that did nothing for the story at all, and all I could say was, "Really?"
Read more
3 people found this helpful
Helpful
Report abuse

David Nasty
5.0 out of 5 stars Like almost al
Reviewed in the United States on April 6, 2015
Verified Purchase
Like almost al. John Adams anthologies, this volume has higher qualitywriting than most and at least a few ,if not more, undicovered authors whose short format stories make you want to go out and explore rtheir other writings. The other best thing about the anthology is that there is no repetitive cookie-cutter 'writing to the book' themes in the entire work. All stories set up different points of view , e.g. a struggling mother of two who feels there is something deciededly different in one of her children and his peers, all born after a Kracatoa-type volanic eruption. The author coveys a sense of foreboding that reflects a fear of all parents , that their child is 'different'. A powerful short story that sticks in your consciousness. Not all the stories are to every taste , which is actually another reason for the rave review. Too many " Wolfman Zobie in space " collections are boring when the same setting generates the same story over and over so that by the time you get to later stories you are numb and your imagination has been starved into submission. No way is ths anothogy like that , the last story read is as fresh as the first and different enough to keep your interest rivited . Good read! .
Read more
3 people found this helpful
Helpful
Report abuse
See all reviews

Alison Young
2.0 out of 5 stars Apocalypse- a bit like buses.
Reviewed in the United Kingdom on December 9, 2014
Verified Purchase
The first five or so stories didn't grab me at all, then the quality picked up. The theme of apocalypse made it feel like a pick and mix of ways humanity might be nearly destroyed and this diminished the experience for me. Perhaps if I'd read one story and left a long interval before the next it might have worked better for me, but I found I couldn't engage with the horrors of each situation afresh and started to switch off to it. I won't be buying the next two books.
Read more
3 people found this helpful
Report abuse

Mark Booth
5.0 out of 5 stars Worth it for Howey and Sigler alone
Reviewed in the United Kingdom on June 22, 2014
Verified Purchase
I will admit that I got this on the strength of both Hugh Howey and Scott Sigler being authors of 2 of the stories but actually pretty much all the rest of the stories are great too. i skipped a couple as they weren't my style or didn't interest me but in a book that features so many stories and authors I think that was bound to happen.

Overall loved it and can't wait of for the next one to find out what happens in the stories.
Read more
3 people found this helpful
Report abuse

rachel clarke
3.0 out of 5 stars Different.
Reviewed in the United Kingdom on September 1, 2017
Verified Purchase
I'm not sure I like lots of bits of stories.....found myself skipping a couple as they didn't seem interesting. If you like a taster of things then its good but if you like to get stuck into a good read then it's not for you. Easy to pick up a just dip into though.
Read more
One person found this helpful
Report abuse

Hank
3.0 out of 5 stars The world has almost ended a bit too many times.
Reviewed in the United Kingdom on January 9, 2018
Verified Purchase
There are some fantastic short stories in this book, and then there are some which aren't as good. I'd really like to see some of the shorts extended to fully featured stand alone novels.

After a while it gets a bit tiring, reading about the the world about to end, over and over again.
Read more
Report abuse

Norma Miles
4.0 out of 5 stars Sometimes surprising
Reviewed in the United Kingdom on January 31, 2015
Verified Purchase
Excellent and often surprising selection of short stories by various authors looking towards the coming of the end. Would recommend not least because it shows how differently eachbwriter interpreted the invitation to write a piece for this book. The accompanying audio book is also most enjoyable.
Read more
Report abuse
See all reviews
Back to top
Get to Know Us
Make Money with Us
Amazon Payment Products
Let Us Help You
EnglishChoose a language for shopping. United StatesChoose a country/region for shopping.
© 1996-2021, Amazon.com, Inc. or its affiliates