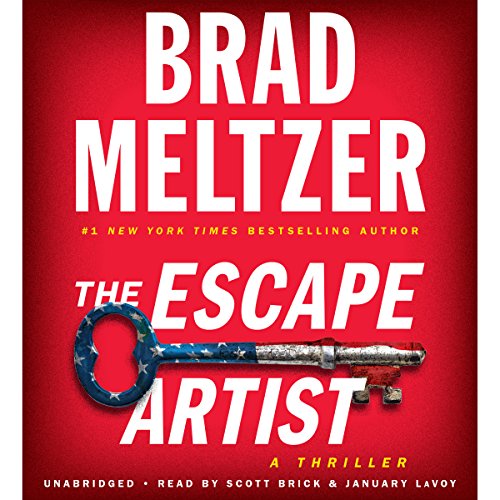 "Meltzer is a master and this is his best. Not since The Girl with the Dragon Tattoo have you seen a character like this. Get ready to meet Nola. If you've never tried Meltzer, this is the one." (Harlan Coben)

Who is Nola Brown?

Nola is a mystery.

And Nola is supposed to be dead.

Her body was found on a plane that mysteriously fell from the sky as it left a secret military base in the Alaskan wilderness. Her commanding officer verifies she's dead. The US government confirms it. But Jim "Zig" Zigarowski has just found out the truth: Nola is still alive. And on the run.

Zig works at Dover Air Force Base, helping put to rest the bodies of those who die on top-secret missions. Nola was a childhood friend of Zig's daughter and someone who once saved his daughter's life. So when Zig realizes Nola is still alive, he's determined to find her. Yet as Zig digs into Nola's past, he learns that trouble follows Nola everywhere she goes.

Nola is the US Army's artist-in-residence - a painter and trained soldier who rushes into battle, making art from war's aftermath and sharing observations about today's wars that would otherwise go overlooked. On her last mission, Nola saw something nobody was supposed to see, earning her an enemy unlike any other, one who will do whatever it takes to keep Nola quiet.

Together, Nola and Zig will either reveal a sleight of hand being played at the highest levels of power or die trying to uncover the US Army's most mysterious secret - a centuries-old conspiracy that traces back through history to the greatest escape artist of all: Harry Houdini.

Your audiobook is waiting!
Learn more about membership
List Price: $29.65
You Save: $3.71 (13%)
By completing your purchase, you agree to Audible’s Conditions Of Use
Sold and delivered by Audible, an Amazon company

Amazon Customer
4.0 out of 5 stars Political Thriller with an awesome Female MC
Reviewed in the United States on March 16, 2022
3.5 stars rounded up to 4.This book is the first in a new series and so there’s a lot of character background and building. This is a contemporary political thriller, which is usually not my thing, but I still enjoyed the intricate storylines.Metzler is great at dropping breadcrumbs, but not giving away too much so that you can easily guess what’s happening. There’s also quite a few different plots running throughout with multiple POV’s and multiple timelines.Most of the chapters are short, keeping the pacing quick. Although I liked Zig, my favorite character was definitely Nola. After a traumatic upbringing Nola is very good at masking her emotions, staying silent and noticing details about people and finding their weaknesses. She is able to do this mainly through sketching while out in the field.Zig comes across her as one of the fallen he’s working on as a mortician for the government. But, she doesn’t have the scar he remembers and therefore is convinced she’s not dead. He somehow forces himself into an investigation surrounding her death that the government is trying to keep a secret. As we find out more about Nola and her past we find out how everything is connected.I loved watching the way Nola and Zig’s minds worked. Despite Zig’s own traumatic grief, it was nice watching him become involved. I enjoyed a lot of the side characters also. There were some questions to both their personal lives that were left open ended that I hope will be answered in the next one.
Images in this review

Paul
4.0 out of 5 stars Unusual Characters
Reviewed in the United States 🇺🇸 on October 7, 2022
Verified Purchase
The relationship between the main protagonists was complex and unusual. It made the story more interesting than the typical mystery. If I had to criticize one thing it would be that the final outcome felt forced, and less satisfying than the story itself. However, I always appreciate it when a story teaches me new things. I learned a few facts about a rarely talked about and rather sad topic - mortuary practices.
Read more
One person found this helpful
Helpful
Report abuse

L. Adams
5.0 out of 5 stars An elegant mystery at its core
Reviewed in the United States 🇺🇸 on November 3, 2022
Verified Purchase
"The Escape Artist" is a well-paced, really well-researched and provocative story filled with understandable if not relatable characters. I'm sure it was subconscious, or perhaps a homage, but when reading I couldn't help thinking that somehow Lisbeth Salander had assumed the identity of Nola Brown and Mikael Blomkvist had been reincarnated as Jim "Zig" Zigarowski. This is meant as a total compliment to Brad Meltzer, not that he needs any accolades from the likes of me. The relationship between Nola and Zig adds rocket fuel to the storyline. If you're a fan of great writing don't miss this one.
Read more
Helpful
Report abuse

K. Adele
4.0 out of 5 stars Informative and never dull
Reviewed in the United States 🇺🇸 on August 8, 2022
Verified Purchase
From p 1, filled with action and mystery. Good character development of all the players. No cardboard cut outs. Great detailed info on how the military processes tens of thousands of its dead soldiers at its Dover facility in Delaware. Truly educational. Only weakness is that as with other Meltzer books, the plot is implausible ... But a good read nonetheless.
Read more
Helpful
Report abuse

Kindle Customer
4.0 out of 5 stars My first Brad Meltzer book
Reviewed in the United States 🇺🇸 on March 13, 2022
Verified Purchase
This is a book of secrets, both personal and Governmental. Mortuary art is not my favorite topic but since I purchased this I had to read it.
The story was interesting but not the kind you can't put down. I read it in three days. Picking it up between other chores.
Death although inevitable is just not a fun background for my sort of action book to have. Believe I will pass on others.

Alan W.
4.0 out of 5 stars Good Mystery
Reviewed in the United States 🇺🇸 on May 16, 2022
Verified Purchase
The first half of the book was a little slow paced. Then it started picking up a bit. The last quarter or so was great!! Lots of action!! The identities of who each code word represented comes out. The mysteries are answered, but I didn’t expect the answers!
Read more
One person found this helpful
Helpful
Report abuse

DDsea
4.0 out of 5 stars different
Reviewed in the United States 🇺🇸 on April 20, 2022
Verified Purchase
No matter what you think about this book, if you get to the end you will conclude that it’s different. I’ve read hundreds or even thousands of books and none really like this one. That’s a significant thing to acknowledge, and not easy to do.
Read more
Helpful
Report abuse

lighthouse88
5.0 out of 5 stars grab a copy and be prepared for a thriller!
Reviewed in the United States 🇺🇸 on April 2, 2018
Verified Purchase
When a friend told me about the latest novel that was coming soon written by Brad Meltzer, I quickly read a synopsis found online. Ok, I was totally hooked! I just couldn’t wait to read the novel that also has factual data inside the story, making the novel mesmerizing to say the least. So, when I began reading, I couldn’t see where the connection was to the magic of Harry Houdini. I plunged ahead and the further into the maze of mystery I explored, I occasionally wondered where the author was taking me. Yet, by the middle of the book or perhaps sooner, I simply couldn’t put the book down until I was so tired I couldn’t see the words clearly. The next day, when time allowed, again I opened the book to continue the exciting and thrilling story that was being slowly woven together right before my eyes. As I went along, I forgot about trying to figure out where I was being led and simply became engrossed in the action taking place.
As I read the last chapter and page, I knew that the wait was worth it! The author delivered one of his absolute best thrillers in a long time! While magicians may use slight of hand, Brad uses his pen in the same way throughout each page and through each character. Sometimes I was taken aback that what I thought was happening wasn’t and/or a totally unanticipated turn in the plot took place.
When you get a copy, be prepared to spend time in pure enjoyment, entertainment, and sharing of knowledge by the tale. Don’t be surprised if you find yourself wanting your friends or family reading their own copy of the book as soon as possible, because you won’t want to share yours!
Read more
9 people found this helpful
Helpful
Report abuse
See all reviews

KathyB
5.0 out of 5 stars In glorious Meltzer style as usual
Reviewed in the United Kingdom 🇬🇧 on October 7, 2019
Verified Purchase
Excellent read. True to Meltzers other books. Fantastic dialogue and keeps you waiting until the very end for the answer.
Read more
Report abuse

Always Reading
4.0 out of 5 stars Houdini, a US Army cover-up, morticians, and more…
Reviewed in Canada 🇨🇦 on February 24, 2019
Verified Purchase
Mix in the magic of morticians, a few Houdini history references, Dover Air Force Base and a high-level government cover-up, a US Army “artist in residence” who is also a lethal assassin and you have the perfect recipe for a Brad Meltzer mystery. Fans will enjoy the way Meltzer moves the story quickly from one tense incident to the next while he unveils government bad guys getting busted by the good guys. Lots of twists and turns and though it’s occasionally a bit of a stretch, it’s fun and fast reading.
Read more
Report abuse

Tiffany B.
3.0 out of 5 stars Somewhat Disappointing
Reviewed in Canada 🇨🇦 on June 7, 2019
Verified Purchase
Not one of Brad Meltzer's best - interesting but not great. The plot was good, the true facts were well-researched & interesting, but somehow it just didn't "hang together" well. The main characters weren't developed as well as they could have been, and therefore didn't engender any attachment to them by the reader. I ended up feeling at the end like, "That's all there is?"
Read more
Report abuse

Kevin Bull
5.0 out of 5 stars Very satisfying
Reviewed in Canada 🇨🇦 on May 8, 2022
Verified Purchase
Àn interesting fiction- could-be fact story that really keeps you engaged. Meltzer does it once again! Looking forward to more in this series
Read more
Report abuse

JF
3.0 out of 5 stars Good read - not sure if it's the best Duo
Reviewed in Canada 🇨🇦 on January 24, 2022
Verified Purchase
Overall it's a good read, wasn't sure about how I felt throughout most of the book (I.e. do I like this or not) I may pick-up the next from the series but not the best piece of literature he's put out.
Read more
Report abuse
See all reviews