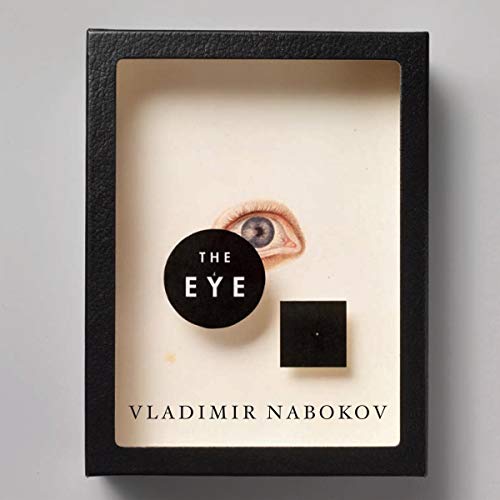 Nabokov’s fourth novel, The Eye is as much a farcical detective story as it is a profoundly refractive tale about the vicissitudes of identities and appearances. Smurov, a lovelorn, excruciatingly self-conscious Russian émigré living in pre-war Berlin, commits suicide after being humiliated by a jealous husband, only to suffer even greater indignities in the afterlife as he searches for proof of his existence among fellow émigrés who are too distracted to pay him any heed.

Special invitation from Audible!
Learn more about Membership
List Price: $18.19
You Save: $2.20 (12%)
By completing your purchase, you agree to Audible’s Conditions Of Use
Sold and delivered by Audible, an Amazon company
Share

4.4 out of 5 stars
4.4 out of 5
52 global ratings
How are ratings calculated?
To calculate the overall star rating and percentage breakdown by star, we don’t use a simple average. Instead, our system considers things like how recent a review is and if the reviewer bought the item on Amazon. It also analyzes reviews to verify trustworthiness.
Top reviews

Jeff LeVine
3.0 out of 5 stars Great opening, but somewhat lost me along the way
Reviewed in the United States on February 5, 2020
Verified Purchase
In the beginning I was immediately captivated, but twenty pages in, when the book switches from first person to a more observational mix and introduces new situations and new characters, it took me a while to find my sea legs. These new things were somehow less interesting than the more straight-forward opening section, though definitely more mysterious. The main character too, somewhat wore out his welcome, and turned into a bit of a bore. Set in the world of Russian expatriates living in Berlin in the 1920s, you do get some insight into that experience, Nabokov’s experience. It’s a short book, that has some merits, some great writing and an interesting concept / twist, even if what is done with it didn’t completely capture my affection.
Read more
One person found this helpful
Helpful
Report abuse

Robert Strecker
TOP 500 REVIEWERVINE VOICE
5.0 out of 5 stars this is a great little gem in the Nabokov catalog
Reviewed in the United States on April 1, 2018
Verified Purchase
This is a short novella more than a novel. I think the idea is great. I have often wondered what people would say about my life after i die. While i feel that i am a success as an artist there is very little financial compensation for my lifestyle.
What Nabokov does here is to let the reader ponder how other people view an individuals legacy.
This is darkly comic in that the lead character is dead or lingering in between life and death and is floating outside of his body in a way observing other people discuss his life.
This is a great study of absurdity and ego identification.
I can identify with this literary approach because i have spent most of my life working on my various artistic projects. To anyone looking at my life from a subjective or critical point of view could either consider me a success due to the massive body of work i have accumulated or a failure due to my financial standing. One of the main jokes here is asking yourself the question does it really matter in the end anyway?? I highly recommend this book. This was at the time the 6th Nabokov book i had read.
Read more
2 people found this helpful
Helpful
Report abuse

Gio
5.0 out of 5 stars Eye Scream Ewe Scream We All Scream...
Reviewed in the United States on July 20, 2008
Verified Purchase
... for more Nabokov! If only he'd been as prolific as Anthony Trollope. This short novella, written in Berlin in 1930, is not nearly the apex of Nab's oeuvre, but it's awfully good. Even when no one could mistake his lepidopterine syntax, it's fun to see him writing in a new genre with every book. The Eye is a tale in the 'doppelgänger' tradition of Poe's William Wilson, Hawthorne's Wakefield, and Melville's The Confidence Man, though there's no reason to assume that Nabokov was aware of his American forerunners. Since the whole novella is built around the reader's dawning suspicions, I can't say much more about the plot without spoiling your pleasure.

The Marxist Revolution makes a cameo appearance in The Eye - its Russian title was closer to 'The Spy' - as in nearly all of Nab's books. In a brief dismissal of historical determinism, he writes: "Luckily no such laws exist: a toothache will cost a battle, a drizzle cancel an insurrection. Everything is fluid, everything depends on chance, and all in vain were the efforts of that crabbed bougeois in Victorian checkered trousers, author of Das Kapital, fruit of insomnia and migraine. There is a titillating pleasure in looking back at the past and asking oneself 'What would have happened if...' and substituting one chance occurrence for another, observing how, from a gray, barren, humdrum moment in one's life, there grows forth a marvelous rosy event that in reality had failed to flower. A mysterious thing, this branching structure of life..." That, my friends, is not only an eloquent dismissal of Marxism but also a fine statement of evolutionary contingency.

Just one more passage from Nab's own words, intended to entice your reading:
"And yet I am happy. Yes, happy. I swear, I swear I am happy. I have realized that the only happiness in this world is to observe, to spy, to watch, to scrutinize one self and others, to be nothing but a big, slightly vitreous, somewhat bloodshot, unblinking eye. I swear that this is happiness."
Okay, I'll accept that, as long as this eye has another Nabokov novel to read.
Read more
29 people found this helpful
Helpful
Report abuse

M. DeKalb
5.0 out of 5 stars Primo Existentialism.
Reviewed in the United States on June 20, 2012
Verified Purchase
After enduring a sound beating at the hands of his mistresses husband Smurov promptly commits suicide as a result of his utter humiliation.

In his non-corporeal state he investigates his `self' in various situations as an observer to his interactions with others. Here Nabokov dips into the existential / absurdist philosophy of the work in a very Sartreian manner.

The central tenant remains that man alone is self-less, that your consorts are mirrors that reflect you - who you really are is discovered through your interactions with others and without them do you even exist?

At all times an investigation of the `self' where Nabokov wishes to withhold the psychological aspect of it and focus solely upon the existential qualities - as seen through the mirrors of suspicion, lies, depravity and unrequited love... tragic, truly, but greatly insightful.
Read more
2 people found this helpful
Helpful
Report abuse
See all reviews

An Leg
4.0 out of 5 stars good
Reviewed in the United Kingdom on July 24, 2017
Verified Purchase
very intersting story and a quick read, unfortunatly the cover looks different than the picture profided
Read more
Report abuse

Mr Volas
4.0 out of 5 stars Good otherwise
Reviewed in the United Kingdom on January 28, 2021
Verified Purchase
Have t read it, took ages to know how to access it.
Read more
Report abuse
See all reviews
Back to top
Get to Know Us
Make Money with Us
Amazon Payment Products
Let Us Help You
EnglishChoose a language for shopping. United StatesChoose a country/region for shopping.
© 1996-2021, Amazon.com, Inc. or its affiliates