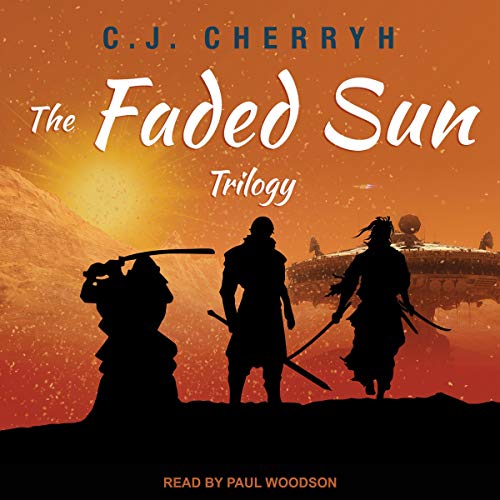 All three books in C. J. Cherryh's epic The Faded Sun trilogy - Kesrith, Shon'jir, and Kutath - collected in one volume.

They were the mri-tall, secretive, bound by honor and the rigid dictates of their society. For aeons, this golden-skinned, golden-eyed race had provided the universe mercenary soldiers of almost unimaginable ability.

But now the mri have faced an enemy unlike any other - an enemy whose only way of war is widespread destruction. These "humans" are mass fighters, creatures of the herb, and the mri have been slaughtered like animals. Now, in the aftermath of war, the mri face extinction.

It will be up to three individuals to save whatever remains of this devastated race: a warrior - one of the last survivors of his kind; a priestess of this honorable people; and a lone human - a man sworn to aid the enemy of his own kind. Can they retrace the galaxy-wide path of this nomadic race back through millennia to reclaim the ancient world that first gave them life?

DiltonFerret
5.0 out of 5 stars Truly A Classic
Reviewed in the United States 🇺🇸 on November 26, 2019
Verified Purchase
I had read this trilogy shortly after the publication of all three books. This is my third re-read and it is still a work of truly awesome magnitude.

Ms. Cherryh explores the politics of three separate cultures in two ways. First, how each of the cultures interact with each of the others. Second, for each of the non-human cultures, she creates and displays a mindset or a cultural psyche, if you will, that significantly differs from that of humanity. These cultural psyches of the alien races are truly well thought out and are a major reason why this trilogy is an outstanding classic.

The reader will perceive the interaction of the regul and humans somewhat like that of the US and the USSR during the Cold War. It is quite easy for the reader to dislike the regul race not only because of this, but also because of their appearance. Their society is similar to the setup of Japanese zaibatsus, only on a completely grander scale. Think interstellar.

The mri in themselves are truly fascinating and what really make this trilogy amazing. At first, their interaction with humanity is on the other side of countless battlefields on many different worlds. As such, humanity (especially the military) just thinks of them as a race to get revenge on as the interstellar war with the regul is now over. The mri were mercenaries hired by the regul to fight for them. As the storyline proceeds, the reader becomes familiar with mri race through two characters, Niun and Melein. At the end of trilogy, it becomes obvious that the mri have a truly epic way of life to which they have remained true for centuries, and that they were misunderstood by humanity.

The main character, human SurTac Sten Duncan, at first dabbles in human politics by acting as aide to the new human governor of Kesrith. There are subtle nuances in everything involving the actions of the governor with the regul, as well as interactions with other humans. Duncan, although lowly in rank, is caught up in machinations and becomes a thorn in the side to the regul. There are other interactions between other human characters that further reflect hidden agendas for differing human factions. But it is through Duncan that the reader becomes familiar with the mri as a race from start to finish throughout the trilogy. It is his metamorphosis that truly enthralls the reader and what I believe to be the main storyline of the trilogy.

Thank you Ms. Cherryh for one of the best science fiction books ever written.
Read more
6 people found this helpful
Helpful
Report abuse

M. Frost
5.0 out of 5 stars The only way to read The Faded Sun. Three good works where the final sum is greater than the individual parts!
Reviewed in the United States 🇺🇸 on October 31, 2015
Verified Purchase
I have previously reviewed each of the three separate works under each individual work. So please feel free to read them over. I cannot stress enough how this wonderful work, which is really one long novel, was artificially cut into three works. The first sets the stage and ends on a cliffhanger. The second picks up right after, continues the journey, then ends on a cliffhanger. The third brings it all to a wonderful fruition. With both a satisfying ending for the reader but also a most philosophical challenge for mankind to ponder.

Ms Cherryh outdoes herself in this story by creating not one, but four other non-human races (one the bear-like Dus): the protangonist Mri, the antagonist Regul, and the enigmatic Elee (only in Kutath). So much of the story is really appreciated from the alien point of view. Not actually the human. The humans exist in and interact around them, but the deepest thoughts about existence and the meaning & purpose of life are told to us through the nearly extinct Mri.

So if you're interested, get all three works separately at one time or just buy the entire trilogy. Because trust me, once you start, you'll want to finish. (The one advantage of buying an inexpensive used copy of just Kesrith is to see if you like the time, places, characters, and races. I think most will and will want to finish the journey. You probably will know by about page 50 or so in Kesrith. But a few might not and that will save them. Also, the disadvantage of the full work in one binding is that it is heavier, a bit hard to hold at times, and sometimes hard to read the words/letters closest to the spine. Never painful or hard work, but just not as easy as three much shorter works.)

Anyone who loves Downbelow Station or Cyteen, as I do, or who just love the way she writes in the limited 3rd person, as well as her way of describing people, places, and events, as I do, should thoroughly enjoy this work. Trust me, you'll love it. Enjoy!
Read more
One person found this helpful
Helpful
Report abuse

Olen
4.0 out of 5 stars A great work of sci-fi marred by typos
Reviewed in the United States 🇺🇸 on March 4, 2022
Verified Purchase
I have always been a big fan of C.J. Cherryh and The Faded Sun Trilogy has been one of my favorites since it was first published. It is fully deserving of 5 stars. Unfortunately, this Kindle omnibus edition is filled with typos; in some cases, several per page, so I reluctantly substracted one star. I've done what I can to report as many as possible. I hope the publisher is responsive to making corrections so a future reader can give it the full five stars it deserves.
Read more
4 people found this helpful
Helpful
Report abuse
See all reviews

Annette. Barrett
5.0 out of 5 stars A thought provoking trilogy set against the backdrop of C. J. Cherryhs classic Alliance univerese
Reviewed in the United Kingdom 🇬🇧 on December 12, 2018
Verified Purchase
I am an avid fan of C. J. Cherryh's work and when I come across this gem, I knew I just had to have it.
Read more
Report abuse