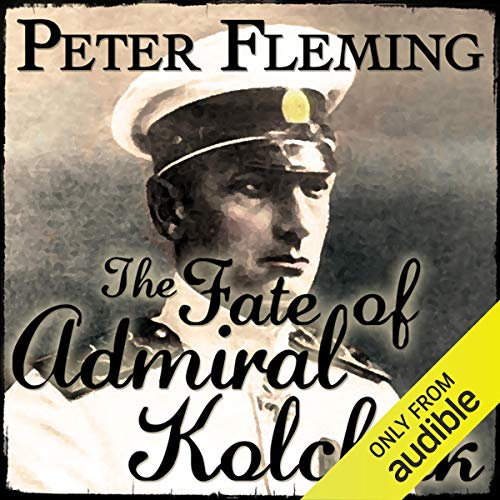 The Fate of Admiral Kolchak

In one year Admiral Kolchak fell from being Supreme Ruler of All the Russias to the victim of a show trial. This text traces his downfall, whilst providing a broader history of Russia in a time of crisis and revolutionary change.

Your audiobook is waiting!
Learn more about Membership
List Price: $16.35
You Save: $1.36 (8%)
By completing your purchase, you agree to Audible’s Conditions Of Use
Sold and delivered by Audible, an Amazon company

Igor Biryukov
5.0 out of 5 stars Important but forgotten episode of the Russian Civil War
Reviewed in the United States on June 9, 2002
"The fate of Admiral Kolchak" by British writer Peter Fleming is written and researched well. Admiral Kolchak, a former commander of Russian Black Sea fleet, became (against his will) in 1918 the head of Russian anti-Bolshevik forces in Siberia. His leadership was not very successful for many reasons. Honest and very proud, Kolchak didn�t fit to be a successful dealmaker and go-between among various anti-Bolshevik forces in Russia and abroad.
In 1919 Kolchak was handed over to the Bolsheviks in Irkutsk by the Czechoslovakian guards (who were supposed to be guarding him). The French General Maurice Janin, who was formally in charge of Czechoslovakian troops as commander-in-chief of all Allied troops in Russia not only did turned a blind eye on this affair, but, as Fleming alleges, he must have been the person who gave the green light to the Czech and Slovak guards to hand over Kolchak to the Russian Red Army in exchange to a free passage to Vladivostok.
Predictably and sadly Admiral Kolchak was executed by the Bolsheviks (after 9 days of interrogations) and his body dumped into the river in Irkutsk. Fleming does not talk extensively about U.S. involvement, but there are several pages describing Woodrow Wilson�s decision to intervene, why it came about and how it was implemented. It seems to be heavily based on George Kennan books.
There are some intriguing details about complicated relationships between British, French, American, Japanese, and Russian anti-Bolshevik forces in the Russian Far East. Useful book for Russian history buffs, although would be probably hard to find (was written in the early 1960s). It�s great that Amazon has at least the audiotape version.
Read more
17 people found this helpful
Helpful
Report abuse
See all reviews

Molerat
4.0 out of 5 stars The man who would be Supreme Ruler
Reviewed in the United Kingdom on February 11, 2011
Verified Purchase
This is not really a history of the Allied intervention in Siberia in 1918, nor is it a biography of the man who would be Supreme Ruler of all the Russias. Fleming does deal with the intervention in some detail but, as he writes in the foreword, "My main purpose is implicit in the title of this book. I wanted to establish as accurately as possible the circumstances of Kolchak's failure, of his betrayal, and of his death." So about one third of the text is taken up with the story of Kolchak's tragic final train journey from Omsk to Irkutsk, where he was imprisoned, interrogated and then despatched by firing squad before being shoved into the river through a hole in the ice. As told by Fleming, this story is quite moving.

One gets the impression Fleming began with great sympathy for Kolchak, but discovered by and by that the Admiral, at least during his term as Siberian dictator, was far from being a particularly attractive individual. However, the author saves his greatest wrath for those he considers the real villains of the piece: the Japanese-sponsored warlord Semenov ("a bandit with many of the attributes of a monster") and France's self-important General Janin, who washed his hands of Kolchak and left him to his fate. Truth be told, it was not the Allies' finest hour.

Incidentally, Fleming revels in the richness of the English language so, if you are less confident of your erudition, keep a dictionary handy for the likes of costive, rodomontade, misprision, inchoate, casuistry, etc.
Read more
17 people found this helpful
Report abuse