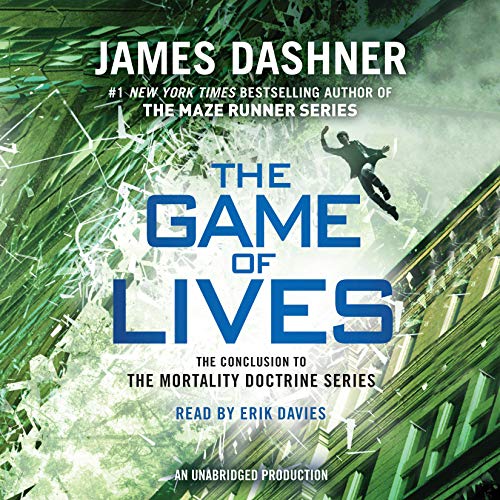 The Game of Lives: The Mortality Doctrine, Book Three

From James Dashner, author of the number-one New York Times best-selling Maze Runner series, comes The Game of Lives, the final book in the Mortality Doctrine series, an edge-of-your-seat cyber-adventure trilogy that includes The Eye of Minds and The Rule of Thoughts.

Michael used to live to game, but the games he was playing have become all too real. Only weeks ago, sinking into the Sleep was fun. The VirtNet combined the most cutting-edge technology and the most sophisticated gaming for a full mind-body experience. And it was Michael’s passion. But now every time Michael sinks, he risks his life.

The games are over. The VirtNet has become a world of deadly consequences, and Kaine grows stronger by the day. The Mortality Doctrine - Kaine’s master plan - has nearly been realized, and little by little the line separating the virtual from the real is blurring. If Kaine succeeds, it will mean worldwide cyber domination. And it looks like Michael and his friends are the only ones who can put the monster back in the box - if Michael can figure out who his friends really are.

And don't miss The Maze Runner movie and its sequel, Maze Runner: The Scorch Trials, from Twentieth Century Fox!

Praise for the Mortality Doctrine series:

“Dashner takes full advantage of the Matrix-esque potential for asking ‘what is real.’” (io9.com)

“Set in a world taken over by virtual reality gaming, the series perfectly capture[s] Dashner’s hallmarks for inventiveness, teen dialogue and an ability to add twists and turns like no other author.” (MTV.com)

“A brilliant, visceral, gamified mash-up of The Matrix and Inception, guaranteed to thrill even the non-gaming crowd.” (Christian Science Monitor)

Special invitation from Audible!
Learn more about Membership
List Price: $35.00
You Save: $4.37 (12%)
By completing your purchase, you agree to Audible’s Conditions Of Use
Sold and delivered by Audible, an Amazon company
Share

4.7 out of 5 stars
4.7 out of 5
597 global ratings
How are ratings calculated?
To calculate the overall star rating and percentage breakdown by star, we don’t use a simple average. Instead, our system considers things like how recent a review is and if the reviewer bought the item on Amazon. It also analyzes reviews to verify trustworthiness.
Top reviews

PageCandy
5.0 out of 5 stars A Thrilling Cyber-Adventure!
Reviewed in the United States on May 3, 2017
Verified Purchase
The Game of Lives is officially out in paperback! So if you haven't yet picked up Dashner's cyber-adventure trilogy, now is definitely the time to start!

This book is just plain cool. In the thrilling conclusion to his Mortality Doctrine series, Dashner has brilliantly imagined a world in which virtual reality has been taken to terrifying new levels where the lines between what is real and what is virtual blur dangerously.

There are so many twists and turns in this inventive plot, I never knew what to expect. Between trying to decipher what was real from what wasn't, deciding which characters could be trusted and which ones couldn't, and the intense and imaginative actions scenes, I was constantly on the edge of my seat.

Something Dashner does incredibly well in all of his book is writing teen dialogue. His word choices have such an authentic quality to them that really builds this great camaraderie between some of his characters and keeps the tension at a boiling point between others, and really brings these characters to life.

I loved how so many action scenes in this book take place in a virtual setting. Not only is it really creative and fun to read, but it also delivered an action-packed story where brains could very believably, and without any super powers, defeat braun. I loved that!

This book is, of course, perfect for fans of The Maze Runner series. I also feel like this is an ideal book for gamers as well as fans of YA sci-fi or dystopian novels in general.
Read more
One person found this helpful
Helpful
Report abuse

Mark
5.0 out of 5 stars Is this real life? Or just an elaborate game?
Reviewed in the United States on January 16, 2016
Verified Purchase
A great conclusion to this series. If you like stories that take place in a virtual world, then this series is for you. If you haven't read the other two books, start with The Eye of Minds. Tangents (computer programs that have gained sentience) are trying to take over the world and human hosts that have connected to the VirtNet. I was often guessing whether Michael, the main character, was in the real world or in the VirtNet, and whether he is human or just a program. Is this a game? Or are peoples lives really at stake? These books always kept me guessing. The only real complaint I have is that the story ended without tying up what happens to one of the main characters. I assume that James left it open to write more books for the series.
Read more
3 people found this helpful
Helpful
Report abuse

TheGiftyGirl
3.0 out of 5 stars Daughter loved the Maze Runner series, but this one not so much
Reviewed in the United States on September 15, 2020
Verified Purchase
She reads so so much and she really liked the Maze Runner series but for some reason she just couldn't get into this one. So much so that she didn't even finish it and that is rare for her. She just must be the exception here because I know this book has a lot of good reviews.
Read more
Helpful
Report abuse

Isabella Allen
4.0 out of 5 stars Nicely made, slightly damaged
Reviewed in the United States on October 14, 2019
Verified Purchase
I haven't read the book because I bought it as a gift. So I am simply rating the condition it came in. It is mostly in excellent condition. It was also thicker than I thought, which was nice. One corner was bent and damaged, which it why it isn't five stars.
Read more
One person found this helpful
Helpful
Report abuse

Flutist_Hippie
2.0 out of 5 stars Not the best...
Reviewed in the United States on January 5, 2018
Verified Purchase
Despite Dashner being a great author, I feel like he didn't put much effort into this book. I love all of his books and the first two of the series were awesome, but this last one was almost action-less. Because this is the last book in the series, I'd expected a much more intense book. Over all, it's worth reading if you want to learn about how everything wraps up.
Read more
Helpful
Report abuse

Kindle Customer
5.0 out of 5 stars Fantastic Close to a great series!
Reviewed in the United States on November 27, 2015
Verified Purchase
This book takes the first two and wraps up all the mysteries. After you pick it up I guarantee you won't be able to put it down. Each chapter has its own unique storyline making each one more and more suspenseful. There's not much more I can say without being a spoiler to the story. So get this book and start READING!!!!
Read more
2 people found this helpful
Helpful
Report abuse

m_bades
3.0 out of 5 stars Meh
Reviewed in the United States on May 9, 2019
Verified Purchase
I expected a better ending. The bad guy was never actually defeated. It was disappointing. I thought it would have a cool ending but in the end the bad guy literally just walked away.
Read more
Helpful
Report abuse

Jason M
4.0 out of 5 stars A pretty good ending
Reviewed in the United States on March 17, 2017
Verified Purchase
It was a good ending to the series, but to be honest, it didn't live up to the first book! I felt that the first captured my attention completely, the second was hard to get through, and the third wasn't boring but wasn't great. Now that's not to say I didn't enjoy it. It really is a good story, I just feel it could've been better!
Read more
Helpful
Report abuse
See all reviews

Mark Cargill
5.0 out of 5 stars Incredible!
Reviewed in the United Kingdom on April 1, 2017
Verified Purchase
When's the next installment?!! Fantastic series of books everyone that enjoys virtual reality and a bit of hacker Sci-fi needs to read this series! Please let us know when the next installment is coming?!
Read more
One person found this helpful
Report abuse

mrs elizabeth a hammond
5.0 out of 5 stars It was very good
Reviewed in the United Kingdom on August 3, 2019
Verified Purchase
I loved all of it. The character development was great and the story progressed at a steady rate leaving small hints to what’s going to happen. Overall this was a great ending to the trilogy and a very good book
Read more
Report abuse

June
5.0 out of 5 stars Excellent
Reviewed in the United Kingdom on September 18, 2019
Verified Purchase
My grandson Loved this Book ,he has read the series Excellent
Read more
Report abuse

Anth (he/him)
3.0 out of 5 stars Another good series by Dashner.
Reviewed in the United Kingdom on September 11, 2016
Verified Purchase
Although not as good as the Maze Runner series (which is excellent) this is a good ending to another enjoyable story. As with the others the pace really picks up in the last third and you won't be able to put it down.
Read more
Report abuse
See all reviews
Back to top
Get to Know Us
Make Money with Us
Amazon Payment Products
Let Us Help You
EnglishChoose a language for shopping. United StatesChoose a country/region for shopping.
© 1996-2021, Amazon.com, Inc. or its affiliates