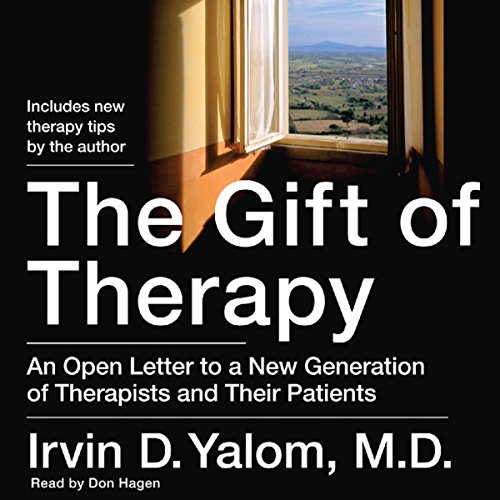 The Gift of Therapy: An Open Letter to a New Generation of Therapists and Their Patients

The culmination of master psychiatrist Dr. Irvin D. Yalom's more than 35 years in clinical practice, The Gift of Therapy is a remarkable and essential guidebook that illustrates through real case studies how patients and therapists alike can get the most out of therapy. The best-selling author of Love's Executioner shares his uniquely fresh approach and the valuable insights he has gained - presented as 85 personal and provocative "tips for beginner therapists", including:

A book aimed at enriching the therapeutic process for a new generation of patients and counselors, Yalom's Gift of Therapy is an entertaining, informative, and insightful read for anyone with an interest in the subject.

Your audiobook is waiting!
Learn more about membership
List Price: $28.51
You Save: $3.56 (12%)
By completing your purchase, you agree to Audible’s Conditions Of Use
Sold and delivered by Audible, an Amazon company
Share

Amazon Customer
1.0 out of 5 stars Insufficient Packaging
Reviewed in the United States on February 22, 2019
Arrived damaged, and cover is different than advertised
Images in this review

Bailey
5.0 out of 5 stars Love it, great for new therapists
Reviewed in the United States 🇺🇸 on November 20, 2022
Verified Purchase
Loved this book. Written with beautiful prose, short chapters that are quick to read but have so much depth, great stories, and tangible ideas of things to say to clients. It was a pretty quick read that was very inspiring and I aim to use a lot of the methods from this book in my practice with clients going forward. Highly recommend for all new therapists!
Read more
Helpful
Report abuse

Amazon Customer
5.0 out of 5 stars Great Suggestions for Beginning Counselors
Reviewed in the United States 🇺🇸 on November 19, 2022
Verified Purchase
I'm reading this as part of the assigned reading for a masters program in clinical mental health counseling. It has been a great book with lots of helpful insights that will serve me well in my future practice.
Read more
Helpful
Report abuse

Kelice Agosto
5.0 out of 5 stars Great read for class
Reviewed in the United States 🇺🇸 on June 30, 2022
Verified Purchase
I had to read this book for one of my classes. I really enjoyed this read and Yalom is such a fascinating writer and person. He breaks everything down for you and it is such an easy read.
Read more
Helpful
Report abuse

Elisa 20Top Contributor: Health & Wellness
TOP 500 REVIEWERVINE VOICE
2.0 out of 5 stars Interesting Book, but With Some Problems
Reviewed in the United States 🇺🇸 on November 25, 2009
Verified Purchase
Dr. Yalom is a good writer and offers a unique perspective here on his decades of work in psychotherapy. It's definitely thought-provoking reading, and very easy to follow.

But it left me with questions for the author (and some serious reservations)--never a good feeling at the end of a book.

On the one hand, I appreciate that his training was to remain distant from patients where, as he described it, even helping an elderly woman put on a coat would be frowned on. I appreciate that, through experience with real-life patients, he realized the importance of establishing warmth, an interpersonal connection, a -human- relationship with patients rather than a distant "psychiatrist-as-remote-God-like" figure.

However, reading many of the chapters here, I couldn't help but think some of the therapy methods he describes could be too intimate and too seductive with his patients. I kept feeling that it would be very easy to act like this and wind up crossing the line--or being misunderstood--in a therapy setting. Sexual attraction (and, as he says, even unconsummated love that is mutually felt) is a recurrent theme in so many stories he shares from his practice.

There seemed to me to be much too much emphasis on talking about the therapist-patient relationship each week. Dr. Yalom writes, over and over, that he realizes he is far more important to his patients, personally, than they are to him. And yet he also seemed to intentionally intensify their feelings for him in the course of therapy, giving example after example of how he pushed them to share dreams about him, fantasies about him, etc. Where there was conflict between what he felt and what they felt, the solution was often to focus on how they were thinking and feeling erotically and/or emotionally about him. When a patient describes how she bonded with her husband when they jointly laughed at something she quoted Yalom saying, he resents the shared jokes about him with her husband, and reminds her that the three of them are in a relationship "triangle".

At least in this retelling, its unclear that this intense emotional intimacy with patients is genuinely best for the patient.

I'm not saying there's any sexual misconduct. In fact, Yalom clearly says that a therapist should never, ever become sexually involved with a patient as it is "a serious betrayal and does great harm to both". He is unequivocal about this and says it is better to even see a prostitute than violate the patient's trust. Nevertheless, putting an outright physical relationship aside, I do feel his methods/remarks as he describes them here, often seem very "seductive" in the broader sense, especially as so many women seek treatment with him for their relationship issues (including loneliness, marital and sexual problems, and low self-esteem).

Its possible that being on first-name basis with a therapist who routinely discloses himself and his personal feelings about you--and who says and shows that he cares about you personally--may be therapeudic. But as recounted in this book it sometimes seems ...a potentially inappropriate pattern with female patients. (I'm also interested that his bi-monthly "leaderless" support group that has met for years consists of 11 psychologists/psychiatrists--ALL of whom are men. Ironic, given his intimate and seductive approach to female patients in therapy, how that "missing" female psychiatrist regularly might be just the right person to offer HIM feedback).

Yalom does quote a renowned psychotherapist who bluntly questions his methods, saying, "Doesn't the intense personal intimacy you have with patients interfere with their ability to terminate treatment?" A great question, and one that, imo, he should have worrying about a great deal more than he shows here.

Anyway, I liked the idea that an emotionally engaged therapist can help a patient more than a distant one. He tells a good story, the short chapters are a bit brave style-wise and serve the reader well. I liked how he revisited Freud in a positive way, reminding us of the historical context of his insights and achievement.

I recommend this book, but with a discussion group. Otherwise, it leaves too many questions about the advisability of intentionally building relationships of intense intimacy and dependency with patients. Alone, it left me with too many unresolved questions and criticisms. As the focal point of group/class discussion, however, it would be perfect.

amtester27
3.0 out of 5 stars Practical advice but….
Reviewed in the United States 🇺🇸 on June 15, 2022
Verified Purchase
Was looking forward to some groundbreaking stuff as a new therapist but most of this I’ve learned in grad school and half of it I just totally disagree with. The advice he gives is pretty practical but keep in mind it was written (and revised but still) by an old white guy in the early 2000s. There is some solid guidance but some of it just comes off as creepy, privileged and lacking in healthy patient/client boundaries. For the record I would NEVER tell my client/patient that I would be attracted to them if I wasn’t their therapist. This is something he encourages if it’s “helpful to their therapy”. No. Don’t do that. Mostly Outdated (and possibly dangerous) advice for 2022!
Read more
13 people found this helpful
Helpful
Report abuse

Amazon Customer
5.0 out of 5 stars Water for New Therapists
Reviewed in the United States 🇺🇸 on March 31, 2022
Verified Purchase
Whether or not you agree with Yalom or share his values, he is a well of knowledge and wisdom based on years of conducting psychotherapy and his own personal self-exploration. His book is delivered with honesty, clarity, wit, and humility. New therapists, the wealth in this book is crucial for both survival and thriving as a therapist. Drink deeply.
Read more
2 people found this helpful
Helpful
Report abuse
See all reviews

DrTim
5.0 out of 5 stars Fantastic read.
Reviewed in the United Kingdom 🇬🇧 on October 7, 2017
Verified Purchase
Yalom is one of the best therapists to have ever lived. He's also a fantastic writer.

This book, full of brief stories teaching therapeutic interventions, I'd recommend to anyone working in the therapeutic field.
Read more
4 people found this helpful
Report abuse

E. Atkinson
5.0 out of 5 stars Five Stars
Reviewed in the United Kingdom 🇬🇧 on December 30, 2014
Verified Purchase
Incredible. A must-read for anyone in the helping professions.
Read more
Report abuse
See all reviews