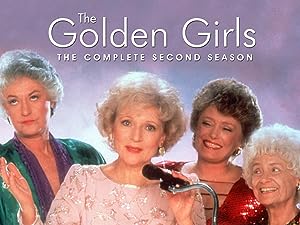 (2,961)
8.119877+
Join Dorothy, the smart one, Sophia, the glib one, Rose, the naïve one and Blanche, the...well, you know...for the second season of one of television's funniest shows ever. It's a star-filled season with special guests, including Burt Reynolds in a surprise cameo and a young George Clooney playing a Miami policeman who saves the day!

Mark N.Reviewed in the United States on August 16, 2019
5.0 out of 5 stars
"The Golden Girls" is a classy and witty sitcom that everyone should own !!
Verified purchase
I've already reviewed and named my favorite episodes from all seven seasons of this sitcom on season 1 so check it out. Season 2's episode "Isn't It Romantic" is my all time series favorite and prior to buying Season 2 I'd always record and watch it whenever it was aired. There's something really visceral about the way the subject matter of this episode is handled and plays out. Dorothy's long time friend Jean, from her college days, visits the ladies. In the beginning only Dorothy and Sophia know that Jean is gay. Rose and Blanche assumed her deceased spouse "Pat" was a man. In a few days, and after having spent time with Rose, Jean confides to Dorothy that she wants to leave early because she thinks she's falling in love with Rose , who at that time in the story line still doesn't know that Jean is gay. The way Blanche finds out, and her reaction to it, is priceless. The way Rose finds out is unexpected and amusing. I really appreciated the way the subject matter was handled in this episode. It's not an "in your face" story. It's done with good taste and kindness.
Another season 2 episode I really enjoy is "It's a Miserable Life". In it Rose petitions to save a 200 year old Oak tree from being torn down, only it's on private property owned by the girl's neighbor, Frieda Claxton (Nan Martin), an elderly spinster who hates trees and people.( Nan Martin also plays the part of Philomena Bosco is season 4's episode "Foreign Exchange") It's the last part of the episode in which Rose, who can't bear the idea that no one cared for or loved Frieda and that she'd be buried in an unmarked grave, tries to make Frieda's life mean something by asking the ladies to help pay for a funeral and the burial. The funeral service scenes are really witty and fun. The way the Oak tree is saved is what's truly touching about this episode. You cannot go wrong with this series. I very highly recommend "The Golden Girls"!!
6 people found this helpful

Billie GrahamReviewed in the United States on June 16, 2022
4.0 out of 5 stars
4 women in the same house
Verified purchase
Certainly not Lucy and Ethel- the “ladies” can be crude, rude, mean-spirited and deal with controversial topics with Hollywood’s normal immoral and left wing “ideals”. The shows always end with all of them being eternally loving and caring - I certainly wouldn’t recommend for children, teens, or weak minds that base their lives on what Hollywood throws at them.
So, quite entertaining if you can see through the put- downs and immoral behavior as the regular Hollywood sitcom portrays now. Just don’t expect a family show if you are looking for teaching good family values, moral behavior, and Christian entertainment..

Judie C. McMathReviewed in the United States on November 16, 2016
5.0 out of 5 stars
Mixed up but great
Verified purchase
These are the same Golden Girls episodes you always loved, except for one thing. There's no way these episodes occurred in the order that they have put them on these DVD's. I have bought the first three seasons now, and the story line is all mixed up. For instance, on the season one DVD Rose loses her job at grief counseling, but in seasons two and three, she often refers to her job and it's obvious that she still works there. In the season one DVD, Michael marries Lorraine, but in season two, he comes to visit his mother for the first time since she's lived with the girls, and he sleeps with Bridget, Rose's daughter. So the order of these is all mixed up but I guess dyed in the wool Golden Girls lovers won't mind that too much. One good thing is that there are scenes included in these episodes that never appeared in the syndicated television version. I've bought one season new and two seasons used, and the used ones have been just as good of a quality as the new one. If you want season two, you'll almost have to buy it used as I've never been able to find a new one.
6 people found this helpful

Austin David LillyReviewed in the United States on May 3, 2022
5.0 out of 5 stars
Nice
Verified purchase
Since all have sinned and continually fall short of the glory of God, Romans 3:23 AMP Therefore there is now no condemnation [no guilty verdict, no punishment] for those who are in Christ Jesus [who believe in Him as personal Lord and Savior]. Romans 8:1 AMP God so loved the world that He gave His one and only Son. Anyone who believes in Him will not die but will have eternal life. John 3:16 NIRV And if anyone’s name was not found written in the Book of Life, he was hurled into the lake of fire

Samantha RossiReviewed in the United States on September 16, 2016
5.0 out of 5 stars
Thank you for being a friend.
Verified purchase
I'm 26 and I am a huge Golden Girls fan. The show is so comforting especially for a pre bed time TV. I love these ladies, you feel like you're their friend too. When I am their age, I hope I am as cool as them with their dating life, cheese cake, pastel outfits etc. The show makes you laugh out loud with little Sophia's wise cracks and Rose's dumbness combined with Dorothy's reactions. I sing along with the opening credits every time and my boyfriend even knows the episodes now because I always put it on when were getting ready for bed. These types of shows are like a warm cookie, soft, warm, happy...nothing that crazy going on. It is nice and a relief to put on instead of all the s*** reality tv.
5 people found this helpful

Michael GriswoldReviewed in the United States on August 8, 2010
5.0 out of 5 stars
Once Upon a Time in 1986
Verified purchase
Season Two of The Golden Girls is where the show really began to hit its stride for what it would eventually become : a mixing of great comedic jokes with social relevancy. Some of my favorite episodes of the season include Isn't it Romantic where Dorothy's lesbian friend visits and falls for Rose much to the hysterical chagrin of Blanche. (Danny Thomas fans need not apply.) It's a Miserable Life where an elderly neighbor drops dead after Rose told her to do so and the ensuing funeral humor. The actor where everyone falls all over themselves when Hollywood hunk Patrick Vaughn comes to visit. Forgive Me Father where Dorthoy has a serious of misadventures with a priest and A Piece of Cake a series of short stories of the Golden Girls birthday moments...Mr. Ha Ha's Hotdog Hacienda anyone...

Several episodes take more serious tones in the second season to ask intriguing questions like : What do you do when your student is here illegally or what if a lesbian person admits their quite fond of you? These questions are wrapped inside of a humorous center that masks their social impact, but this was 1986 when these matters were not discussed on television much, if at all. At the end of the day, this may be the defining thing about The Golden Girls because they delved into so much untouched territory for the time period and were able to create a funny story around being so serious.

booknerd12Reviewed in the United States on May 22, 2017
5.0 out of 5 stars
All hail Dorothy!
Verified purchase
Seasons one, two and three were the best of the series (although even the 'meh' episodes were better than most other tv shows). The ladies were all perfect in their roles, and the writing was brilliant. No one can deliver a line like Bea Arthur, and the chemistry was untouchable.
Even though it is still being shown on 4 different TV networks, I really recommend you buy your own set.

The years don't diminish the laughs or the amazing talents of these ladies.
4 people found this helpful

Biology teacher Reviewed in the United States on March 7, 2021
1.0 out of 5 stars
DVDs don’t play
Verified purchase
The third disc was unplayable. I was really disappointed because I thought this was the real thing. By the time I got around to seeing it of course I’m past the return window. Don’t buy it go buy it from Best Buy instead.
2 people found this helpful
See all reviews
Back to top
Get to Know Us
Make Money with Us
Amazon Payment Products
Let Us Help You
EnglishChoose a language for shopping. United StatesChoose a country/region for shopping.
© 1996-2022, Amazon.com, Inc. or its affiliates