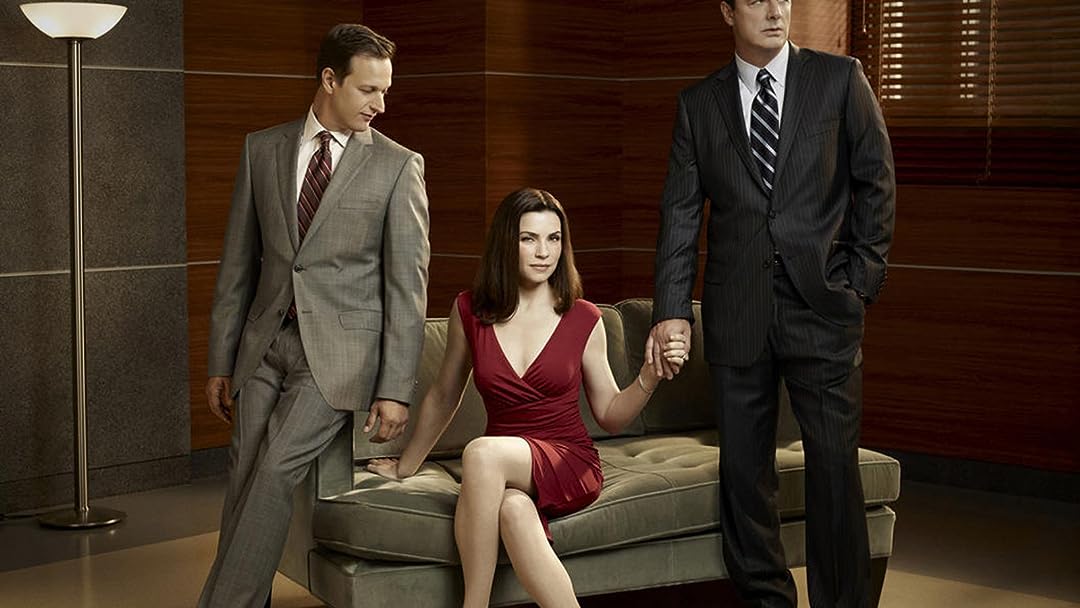 (16,208)
8.42010X-RayTV-14
THE GOOD WIFE is a drama starring Emmy Award winner Julianna Margulies as a wife and mother who boldly assumes full responsibility for her family and re-enters the workforce after her husband's very public sex and political corruption scandal lands him in jail.

Valley League DadReviewed in the United States on September 16, 2015
5.0 out of 5 stars
Excellent show, except departures from legal reality.
Verified purchase
Boy, I went into this expecting a mushy soap opera with some political overtones much like the current Scandal. Oddly enough, there are plenty of Scandal actors working in this series, so they seem related somehow. However, not quite through Season One, I am finding the show oddly intelligent and thoughtful and not at all what I expected. BUT, as a lawyer, I still cringe two or three times a show at the "made for TV" legal reality, which does not match up with the actual real legal world. For instance "you need to testify on appeal." In 99.99% of all appeals, there is no testimony, only the record from the court below. Despite what one sees here (and it was the same on Boston Legal) lawyers don't just visit another firm and sit down for a "settlement conference." We might gather for a mediation, but I don't see a mediator in sight. But it makes for dramatic, good TV for the non-legal folks, and I can live in that fantasy world of lawyering for an hour at a time. And why are none of them hunched over their computers, researching and writing? Not even the lowly junior associates. Let me tell you, a real junior associate at a firm of that kind would not see sunshine very often. They would be researching and writing for the older lawyers. The acting is good, the writing is good, the storylines are good, so I'll overlook these departures (and many others) for the time being at least
23 people found this helpful

Sense and SensibilityReviewed in the United States on November 19, 2016
5.0 out of 5 stars
A riveting legal drama with the smarts of "Homeland," "The Night Manager," "Borgen," and "The Last Enemy."
Verified purchase
This is a fascinating, well acted drama, with some superbly multi-faceted and unforgettable characters. My husband and I are binge-watching this. We also enjoyed "Homeland," "The Last Enemy" "Borgen" and "The Night Manager." This drama shares the smart snappy writing and the suspenseful plotting of those dramas, with a strong female lead--though all the cast is excellent. This is riveting and absorbing.
18 people found this helpful

Alex Nichols, author of Shadow RockReviewed in the United States on November 3, 2019
5.0 out of 5 stars
First-rate political and courtroom drama.
Verified purchase
The Good Wife is a show I nearly missed out on, partly because it takes nearly half of the first season to establish its tone and fully take flight. I tuned in originally because the premise was intriguing. The protagonist, Alicia Florrick, is the woman behind the fake political smile, standing by a man most women would be happy to be rid of. What makes someone like this tick? From the get go, it is clear that Alicia is complicated. That only develops further as the seasons unfold.

If the series had just been about her, I might have lost interest. However, it is also a first-rate courtroom drama and an intriguing political drama with an enthralling romance at its center. An episode like "Bad" features the strengths that hooked me. A disarming sociopath, Colin Sweeney, is introduced and you just can't look away. Who is this man and why would any decent person defend him? There are no easy answers. Equally engrossing is "Heart" in which Alicia crosses a professional line with her boss from which they will never fully recover. And if the final moments of season finale"Running" don't hook you, then you really aren't a fan.

The episodes are tightly written with both stand alone legal plots and an overarching political triangle that has multiple reverberations. The cast is uniformly good. My favorites are Josh Charles as Will Gardner and Christine Baranski as Diane Lockhart, as odd and endearing a professional couple as any I have seen. Much attention is given to Juliana Margulies and there is a reason for that. She steers the show gracefully. There is also stellar work by a large supporting cast of mostly familiar faces. If you watched Gilmore Girls, Weeds, The Sopranos, Nurse Jackie, and The Americans, you'll be happy to see familiar faces used effectively. And there are many peculiar cameos by famous faces playing quirky judges. My favorite is Ana Gasteyer as a woman who insists that lawyers in her courtroom preface everything they say with, "In my opinion."

I absolutely loved this first season. Don't miss it.

H. ParkerReviewed in the United States on September 29, 2015
5.0 out of 5 stars
Addicted from first few moments of show
Verified purchase
This show is a really great show and I was addicted from the first few moments. It stands alone in a crowded genre. I really liked the issues it brings up about corruption, politics, law, love, religion, marriage, sex, affairs, public scrutiny. My favorite episodes include the one where they try a college roommate that's on trial for killing her friend. Even though she's not guilty, she's not guilty she ends up accepting a ten year deal because they're worried about what the jury might do. As the judge explains to the jurors how they're no longer needed, it pans to the garbage where 12 votes of not guilty from the jurors are. That to me was very poignant and moving and made you question how often that situation truly happens in real life. I also like the fact that Alicia learns lessons at work such as their role as lawyers is to their client whether they like the person or rather they're guilty or innocent. I also love how even though Alicia's husband publicly cheated on her with strippers and that its remarked that she's a sexual prude, she stays with her husband which is interesting rather than leave him and then when she has the chance to cheat with her boss/past Georgetown law "ex", rather than jump into bed or a relationship right away, she remarks that rather than romance which is the easy part that she needs a plan because family and children and parent teacher conferences are the hard part. You spend episodes invested in the should they, shouldn't they drama which culminates in the season finale. I can't wait to find out if season 2 is as amazing and earth shattering TV as season 1.
5 people found this helpful

B. MaroldReviewed in the United States on January 26, 2014
5.0 out of 5 stars
Engrossing
Verified purchase
When this show first aired, like a lot of other shows, there was nothing about it, aside from the fact that a regular guest star was Chris Noth, a better than average detective role on Law and Order. Not enough to have me set aside an hour each week to watch it. Since it first aired, I've seen another big legal show, "Suits", and it was just a tad unrealistic, in the way "House" is unrealistic in that it seems the main character would never get away with some of the things House and Harvey Specter pull.

But then, I started watching early "ER" episodes, where "The Good Wife" lead, Julianna Margulies, was a prominent character, and one of the main reasons for watching "ER" for the first seven seasons. Margulies is not alone. Her two best supporting actors are Josh Charles, from "Sports Night" and Christine Baranski, from guest appearances going back 30 years. Both are more realistic than the principle partners on "Suits".

Everything really "clicks" in this first season. It all works so well that I hope the wheels don't come off for at least another two or three seasons. What may be missing is that unlike the ER, there is little room to add additional permanent cast members.

Executive producer is Ridley Scott, and this show has the same nice 3 part balance between home, office, and courtroom that I liked in "Numb3rs." wish it luck. A few visits by some "Numb3rs" stars can't be bad.
5 people found this helpful

Arno VoskReviewed in the United States on December 5, 2020
4.0 out of 5 stars
Good series
Verified purchase
This is definitely one of the better American TV series. It has good characters, some you root for, some you can't stand, almost without exception well-acted. If you liked the original "Law and Order" you will probably like this series, as each episode presents a problem that is resolved, either well or not so well, plus some ongoing themes. I did get a little tired and found the program kind of soap-operaish after a while, but my wife is devotedly watching every episode.

Charlie PinordReviewed in the United States on August 25, 2015
4.0 out of 5 stars
the Good wife. a must see,a must watch
Verified purchase
A good hard study in the daily life of a big law firm as lived by newcomer with all the delay draw a of such a law firm trying to maintain its head above water while belittling the daily rule and resorts tadie tasks I used to work for Xerox in San Francisco while visiting all the top law firm in the city.
This show morrows that day to day feeling of just keeping your keeping your head out of the gangland noose only badly while still maintaining connections with client and maintaining those confidences on a daily basis.
I went through the same things , maintaining relationships,maintaining your life,showing up for work work every day and pretending the the previous day did not matter. I did so for 4 1/2 years always with a smile on my face no matter how I felt about the individual and getting the job done.
This story maintains that attitude through the series while still allowing itself to never quite get bogged down in all it minutiae.
2 people found this helpful

Self-MadeReviewed in the United States on March 10, 2015
5.0 out of 5 stars
Intriguing Pathetic Clever Writers
Verified purchase
Treachery, Lust, Entanglement, Lying, Deceit, Politics, Politicians. Scoundrels. All for the winning. Some Reconciliation and Redemption. Makes me even more cynical and sad that this is a portrayal of reality. Lawyers...humpf! Judges...humpf! Politicians...humpf! The script writers do an amazing job...there are some repeated clever phrases that pop up out of different people's mouths in various episodes which makes me think somehow I've been living in a different world because I have never heard these bits of wisdom before. Watch closely to catch some of them. There seems to be a continuity problem on occasion; the most glaring comes in a later episode. Here is another observation which I find confusing at worst and humorous at best...my take is that everyone is able to bi-locate, and take care of complex issues in matters of minutes with the firms ability to be omniscient. Their lead investigator is Wonder Woman in disguise! Overall, it is very entertaining, not necessarily because of the weaving of the story lines, but because I have to laugh at how the writers manage to create situations to use their "one liners" of wisdom. They are also very adept at showing how brilliant everyone can think, yet not be able to manage their own pathetic personal lives.
See all reviews
Back to top
Get to Know Us
Make Money with Us
Amazon Payment Products
Let Us Help You
EnglishChoose a language for shopping. United StatesChoose a country/region for shopping.
© 1996-2022, Amazon.com, Inc. or its affiliates