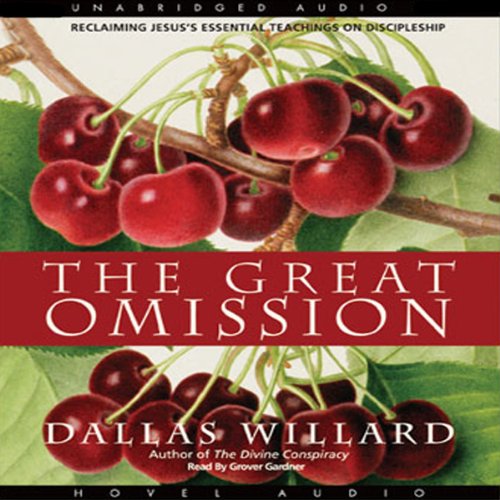 List Price: $18.89
You Save: $1.94 (10%)
By completing your purchase, you agree to Audible’s Conditions Of Use
Sold and delivered by Audible, an Amazon company
Share

4.7 out of 5 stars
4.7 out of 5
294 global ratings
How are ratings calculated?
To calculate the overall star rating and percentage breakdown by star, we don’t use a simple average. Instead, our system considers things like how recent a review is and if the reviewer bought the item on Amazon. It also analyzes reviews to verify trustworthiness.
Top reviews

ron
1.0 out of 5 stars a distraction for Christians
Reviewed in the United States on May 9, 2020
Verified Purchase
Great Title! There is no other positive thing to say except for the well-worded presentation of faulty logic. New terms -- usually capitalized as if they mean something -- are introduced as vague solutions to generalized problems assumed to affect Christians who can't find an answer; an oxymoronic phrase. Instead of reminding the Christian to ask God for wisdom as was promised, and to accept trials as opportunities to apply and perfect faith, this guy introduces another layer of home-spun philosophy to an otherwise 'dial-direct' type of personal relationship with God. Except for the title selling the book, the text does nothing except widen the already wide path leading nowhere. This book would make a great counter-example in classes of Logic and Bible Study, and as a profitable example of writing-by-recipe with political slight-of-thought. This book at least lives up to its title.
Read more
4 people found this helpful
Helpful
Report abuse

Cloyd
5.0 out of 5 stars A challenging read to a much more challenging but simpler glorious life
Reviewed in the United States on May 31, 2020
Verified Purchase
Dallas approaches his quarry carefully to convince us (yes, Christians are his quarry) to decide to be disciples, flawed faithful followers, of Jesus. The Gospels can state it simply: Jesus says, “follow me.” Centuries of theological debates and overreactions to errors of several types trigger responses AGAINST the good news that we are called to salvation now by following Jesus now into living in his kingdom here and now. Dallas chooses his words carefully to win as many as he can to apprenticeship to Jesus. He repeats phrases like “the gospel is opposed to earning, not to effort” and makes a persuasive case for such. I will not blunder to offer that case. Instead, “eat this book” (chew on it, swallow it, digest it, let it become part of you). Then follow Jesus.
One case I think he did not make enough of is that the disciples in the Gospels (Matthew, Mark, Luke, and John—and in Acts and the letters and Revelation) were clearly under grace moment by moment; they bumbled after following Jesus (the Lord) as faithful to him (the Son of God, Christ, God-in-fleshed) not primarily a set of faith statements (which are also vital but not sufficient) and their many muddled misunderstandings and frequent “little faith” times were part of them following Jesus, learning what that means as a way of LIVING, and being an example for us. Let us follow Jesus as imperfectly as they did, learn grace as fully as they did, and be leaven, salt and light to the world as they were. Dallas lays out the program. Seriously intend to follow and obey Jesus and learn the habits, practice the disciplines, and be formed into the kind of people who reflect his glory from one degree to the next.
Read more
2 people found this helpful
Helpful
Report abuse

John M. Poling
5.0 out of 5 stars Encouraging; challenging.
Reviewed in the United States on May 27, 2016
Verified Purchase
Pretty much everything Willard wrote was gold. This book addresses the lack of discipleship in the church today, which Willard believed would 'solve most of the church's problems.' Probably true, but we may never know. Today we can't even get people to show up for corporate worship more than twice a month, and such folk think they are really committed, or as committed as their lives will allow. Now, they may be fasting, praying, studying the Bible, witnessing, involved in acts of compassion, pursuing social justice and so on in all the free time they have as a result of only giving two hours or so a month to public worship. I doubt it. If more people would read Willard it would help, in my view.
Read more
12 people found this helpful
Helpful
Report abuse

David G. Bowman
5.0 out of 5 stars Simply Savor
Reviewed in the United States on November 19, 2020
Verified Purchase
Some books demand simple savoring: one bite at a time, slowly chewed, deeply appreciated, remembered fondly long after the meal has concluded. This is one of those books. Notes retained will provide years of continuing instruction. Book recommendations will fill many evenings with extended reflection. This book is a treasure.
Read more
2 people found this helpful
Helpful
Report abuse

H. A. Hanks
4.0 out of 5 stars A Serious Book For Serious Believers
Reviewed in the United States on April 22, 2014
Verified Purchase
Willard was a fine Biblical philosopher and I admire his numerous writings on the Christian life. His heavy emphasis on the various disciplines of the Christian inner life is important. The work of believers becoming true disciples requires real love of God and genuine obedience to all the scripture. Serious Christians seeking a deeper walk and a greater impact will gain much insight about what discipleship means. However, one cannot overlook the fact that though he is Baptist in a general sense, he is much influenced by his close association with Quaker theology. His long connection during his life with Quaker Richard Foster (once his pastor) is part of his influence.
Although very popular with many Christians as a writer, one needs to examine all things through scripture. The problem is few Christians will find the passion of Willard and Foster for the life approach he proposes. I am a pastor of 35 years and struggle with being consistent in such a life.
Read more
10 people found this helpful
Helpful
Report abuse

Mine
1.0 out of 5 stars Know about how the Bible was canonized and what things that Jesus said were left out
Reviewed in the United States on November 25, 2018
Verified Purchase
Started out really good, the quickly became trash. The author goes on a preaching rant akin to a right winger tweet storm after watching a certain right wing news channel with strong opinions. Grant it this author is a Caucasian baby boomer and is more concerned with his ideas and opinions, so it may be a good book for his target audience. I’m not in it though so use your judgment.
Read more
4 people found this helpful
Helpful
Report abuse
See all reviews

Mr M
4.0 out of 5 stars Highlights a major need to be addressed in the Church
Reviewed in the United Kingdom on August 20, 2018
Verified Purchase
Some of the text was a bit in-depth - intractable but overall has been a good read. Not too sure that it is practicable though
Read more
Report abuse

Amazon Customer
5.0 out of 5 stars Five Stars
Reviewed in the United Kingdom on April 6, 2018
Verified Purchase
Love anything by this author
Read more
Report abuse

Laurie
4.0 out of 5 stars Great spiritual growth book
Reviewed in the United Kingdom on October 10, 2013
Verified Purchase
Willard is an emotive writer who inspires. I find this book to be more refreshing and useful than academically relevant
Read more
Report abuse
See all reviews
Back to top
Get to Know Us
Make Money with Us
Amazon Payment Products
Let Us Help You
EnglishChoose a language for shopping. United StatesChoose a country/region for shopping.
© 1996-2021, Amazon.com, Inc. or its affiliates