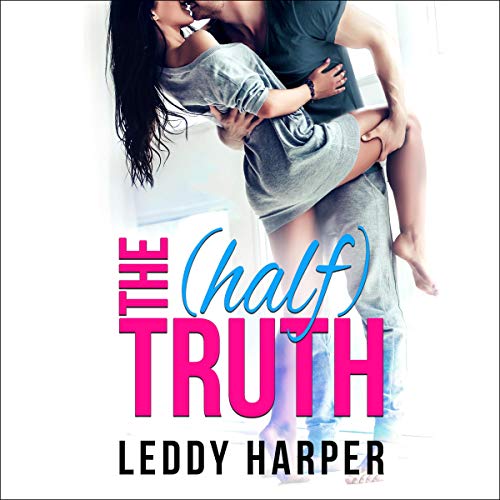 From best-selling author Leddy Harper comes a sizzling romance about an aspiring young chef who may discover that the perfect recipe for love involves all accidental ingredients....

Tatum Alexander is so close to realizing her dream of becoming a sous chef she can taste it, but working at her ex-fiancé’s restaurant with his new girlfriend was never in her career plan. To save face and prove she’s moved on, Tatum cooks up a lie that she’s in a relationship with her best friend’s superhot cousin. There’s just one problem: Jason only recently moved to town, and he has no idea they’re already “dating.”

Jason’s a recovering ladies’ man who shouldn’t be on the menu, but that doesn’t mean he’s immune to Tatum’s quirky charm. Giving her lie a kernel of truth, they decide some no-strings-attached fun between the sheets can’t hurt. But as Tatum’s forced to keep making up stories to cover her original fib, she has a hard time separating what’s real and what’s fake - including her feelings for Jason.

With too many tales spun, Tatum can only watch in horror as her collection of yarns begins to unravel, leaving everyone she cares about feeling betrayed. After so many lies, will it be too late to set the record straight? And more importantly, will she be able to convince Jason there’s truth in their love?

Special invitation from Audible!
Learn more about Membership
List Price: $14.99
You Save: $2.00 (13%)
By completing your purchase, you agree to Audible’s Conditions Of Use
Sold and delivered by Audible, an Amazon company
Share

4.4 out of 5 stars
4.4 out of 5
167 global ratings
How are ratings calculated?
To calculate the overall star rating and percentage breakdown by star, we don’t use a simple average. Instead, our system considers things like how recent a review is and if the reviewer bought the item on Amazon. It also analyzes reviews to verify trustworthiness.
Top reviews

ADuffie
4.0 out of 5 stars A fun quick read
Reviewed in the United States on April 15, 2019
Verified Purchase
I loved this book! Leddy Harper had me laughing while I enjoyed this read. Tatum is a sou-chef and loves her job and is engaged. She is living her dream and excited for the next chapter in her life. She never dreamed her fiancé would end things and now she is stuck working for him at his restaurant while he flaunts around his new girlfriend.

She is determined to not let him get to her and continue to do her job and eventually move up. The only way to prove she has moved on is to get the perfect fake boyfriend. Her best friend and roommates cousin will do just the trick. He has no clue he is her “boyfriend”.

Jason has just moved back to town leaving behind his ex in Vegas to be closer to his family. After meeting Tatum his cousin warns him to stay away. He tries his best and eventually they decide on secret friends with benefits.

The banter between these characters was perfect. I really enjoyed this book and am looking forward to reading more from this author.
Read more
2 people found this helpful
Helpful
Report abuse

Vj
1.0 out of 5 stars All in all a disappointment
Reviewed in the United States on May 16, 2019
Verified Purchase
I really did not like this book. It did start out okay, but then it got ridiculous, it really dragged in. For some reason Tatum rubbed me the wrong way and it took awhile to warm up to her but she did not got any better in the end, she try to justify the way she lie back and for, even though it feels wrong, she keep up and make worst. Jason is a nice guy, I did not like the cousin Kelsey she not nice to him or her. Their story did not hold my attention, the sneaking around is fine to a point, but it hindered the chemistry. I found to be lacking, The are a few twist and too much happened in the end and too fast. The narration was ok. All in all a disappointment.
Read more
One person found this helpful
Helpful
Report abuse

Beckyrae99 (Becky Wise)
4.0 out of 5 stars Amazing
Reviewed in the United States on February 19, 2019
Verified Purchase
The (Half) Truth is an amazing read. I love Tatum. She sure knows how to get herself into some pickles though. You know it's all going to come crashing down but you can't stop yourself for every little misunderstanding that comes out with Tatum. Jason is ready for more and you can just feel the chemistry he shares with Tatum roll off the pages as you read. As all is reviled you feel for both Jason and Tatum. Jason isn't known for second chances. He has a bit of a past reputation that his cousin likes to use against him. Returning home you can tell he is a new man and you hope Tatum is the one. I love Tatum and Jason together. There are a lot of cute and sexy moments in this one. This one is an amazing one click read I couldn't put down.
Read more
2 people found this helpful
Helpful
Report abuse

SMD
5.0 out of 5 stars Quirky, awkward, lovable Tatum...
Reviewed in the United States on February 23, 2019
Verified Purchase
If you're like me and your best friend is quirky and socially awkward and you think it's cute and lovable, this book will be right up your alley. From cheese puffs to kitchen fires, there were times I wondered how much of Tatum's experience had been plucked from real life...because you just can't make this stuff up.

Harper did an amazing job of weaving a tale of Half Truth through a love story that will have you rooting for the characters and laughing through your tears. Another well-done book by a fabulous author.
Read more
2 people found this helpful
Helpful
Report abuse

FlattLinesNoodle
4.0 out of 5 stars Awkward love
Reviewed in the United States on August 8, 2020
Verified Purchase
Tatum is so awkward. I kinda cringe reading about her, but I totally get it. I'm probably more awkward than she is. It's kind of funny the stuff she can get herself into. Apparently there was something about her that appealed to Jason. They were sweet together and had a little heat to them, especially when a relationship was forbidden. They were both kinda broken, but it worked.
Read more
Helpful
Report abuse

Sharing My Book Boyfriends
4.0 out of 5 stars Fun, quirky, and romantic!
Reviewed in the United States on May 11, 2019
Verified Purchase
4.5 Stars! I loved quirky Tatum and swoon-worthy Jason! I loved the easy connection they shared. There were many romantic and swoony parts, as well as laugh out loud moments, not to mention the incredible chemistry Tatum and Jason had. Tatum did let her lies go on a bit longer than she should have, but I hoped Jason would forgive her for her half truths. Truthfully though, I very much enjoyed this book.
Read more
Helpful
Report abuse

Kindle Customer
5.0 out of 5 stars Tatum and Jason
Reviewed in the United States on February 27, 2019
Verified Purchase
Eep! This book was all the things! I love a Leddy "Light" book. Lighthearted and fun with more humor and comedy than you could shake a stick at but with just enough drama to make it REAL. Tatum is such an amazing character and so relatable, girlfriend should come with a warning label for embarrassing decibels and shenanigans when put on the spot. Jason is a complete surprise and I adore him. Definitely recommending
this one! So good!
Read more
One person found this helpful
Helpful
Report abuse

Luanne Cherry
5.0 out of 5 stars Loved this!
Reviewed in the United States on October 17, 2020
Verified Purchase
This was a wonderful romance. It has all the ups and downs of falling in love and breaking up. Tatum adds so much fun to the story with her crazy way of dealing with difficult situations. Jason was just what Tatum needed and did not even know it. I enjoyed every minute of the audiobook.
Read more
Helpful
Report abuse
See all reviews
Back to top
Get to Know Us
Make Money with Us
Amazon Payment Products
Let Us Help You
EnglishChoose a language for shopping. United StatesChoose a country/region for shopping.
© 1996-2021, Amazon.com, Inc. or its affiliates