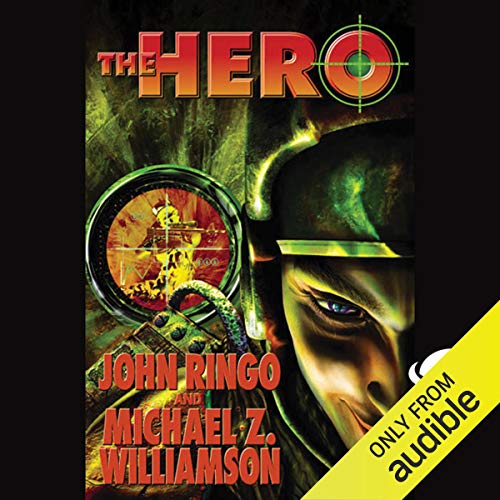 The Hero: Legacy of the Aldenata

John Ringo (Author), Marc Vietor (Narrator), Audible Studios (Publisher) & 0 more
4.0 out of 5 stars 184 ratings
See all formats and editions
Sorry, there was a problem loading this page. Try again.
The human was an expert sniper-and a psychopath. He had never failed in the past when he stalked human prey. But now he is on an enemy planet, and his prey is anything but human.

The Darhel are a race with a highly developed empathic sense. Long ago, they learned that they cannot deal death to another intelligent being without being destroyed by the death agonies of their victim. Even though they have been manipulating other species behind the scenes for millennia, including the humans of planet Earth, they cannot bear to kill another being, and depend on other, less sensitive beings, to do their dirty work.

But now one of the Darhel must kill or be killed. And the fate, not only of his own race, but all of humanity, is riding on his survival. The course of the next thousand years will be determined by whether or not he can learn to fight back. If he cannot, it will be too late...for the entire galaxy.

Special invitation from Audible!
Learn more about Membership
List Price: $24.95
You Save: $5.96 (24%)
By completing your purchase, you agree to Audible’s Conditions Of Use
Sold and delivered by Audible, an Amazon company

Bill Monoson
1.0 out of 5 stars Most disappointing
Reviewed in the United States on September 19, 2019
Verified Purchase
I am a Ringo fan, but this book does not measure up. First, it is not really a part of the Legacy except in the most distant respect. I expected from the placement (book 5) to bridge the gap from when Cally at 13 to Calla's War. it did not do that. The plot was boring and mostly not very interesting. I found myself forcing my way through the story without the sense of wanting to know what's next that is so typical of John Ringo stories. I do not recommend this book to any real Ringo fan because you will only be disappointed.
Read more
5 people found this helpful
Helpful
Report abuse

Pavel
1.0 out of 5 stars Terrible book
Reviewed in the United States on September 18, 2018
Verified Purchase
Did not care for this book at all. The first thing that turned me off, were the stupid, stereotypical nicknames the team members had,
; Gun Doll-the female team member, Gorilla-the super muscular guy, Dagger-the sniper, the rest were just as dumb. A last minute alien team member is added to the high speed recon group and off they go, with one day to integrate this new member of the team, yeah that makes sense. Then you have a totally unneeded and long portion detailing the squad going out for the night. Finally they head out on their mission, and you endure a long boring period, detailing their travel to the target planet; stasis, sitting in chairs and sleeping on the drop ship for days, waiting to get inserted. Then you get a thrilling dose of more sitting and sleeping, after they land on the planet and their infiltration vehicle moves to their insertion point.

They finally get moving and I felt, ok, it’s gonna get better.....it didnt. The team is on a super sneaky LRRP mission and do everything they can to reman stealthy.....until they have to kill a local predator that attacked them (which was understandable) and then decide to all test their fire their weapons at the carcass.....sure let’s make more noise and then go back to being super disciplined with everything else.

They find their target, which was a mock enemy base with one real bad guy and a bunch of bots and holograms......weird, and they decide to pull out without looking for any other signs of a real base.....double weird. There is a betrayal and the rest of the book is a long, boring story about three guys tracking each other through the jungle, trying to kill each other. There are lots of other things that made no sense, but they’re too many to list. Ringos’ other books always maintained realism in how soldiers would act and respond; this book did not do that at all.

This book was set a 1000 years after the 4th book, which kind of threw me off. What happened to everyone from the last book?

I’ve read many of Ringos books and I realize this was written for him by another author, but this will end me reading the rest of the series.
Read more
2 people found this helpful
Helpful
Report abuse

Scott K. Walker
4.0 out of 5 stars Different writing style than John Ringo
Reviewed in the United States on July 1, 2021
Verified Purchase
There is something very different about the writing style than the "Posleen" books written primarily by John Ringo. This reads like something written by a different author in the same universe, with just enough editing by the universe's original author to justify a co-authorship.

Hey, I get it. I really do. The original author is entitled to a cut when someone else writes in their universe.

It is an engaging book that digs deeper into the Darhel than previous books in the series. It stands well enough on its own, but is much easier to follow if you understand the universe that John Ringo created in the original Posleen War books. Just expect that the writing style will be different, and that it will be set in the far future (1000 years after the Posleen War) and you will likely enjoy the book.
Read more
Helpful
Report abuse

Desert Rat
2.0 out of 5 stars Not much to see here
Reviewed in the United States on January 25, 2021
Verified Purchase
I would describe this as 90/10.

Ninety percent of the book could be any male oriented action adventure pulp set in mid 20th century. Something in the style of “Treasure of Sierra Madre”. No need for science fictional elements at all.

Ten percent has some interesting development of the various alien species and the mysteries of the Aldenante. This particular book is only midway through the whole series (even if pushed a thousand years on the timeline).

The disappointing thing about the whole series is that if military/secret agent stuff were condensed down to about half a book, the underlying story about humans, various other species and the Aldenante could fill out the rest of think volume and be an instant classic.
Read more
Helpful
Report abuse

The Last Plainsman
2.0 out of 5 stars Ringo drops the ball.
Reviewed in the United States on September 7, 2015
Verified Purchase
Ringo has obviously gotten popular- you can tell because now he just assigns outlines to another author and apparently just walks away from it. For my own tastes, this thing was just tedious as h3ll. You went far out into the weeds with what each character was thinking. I realize this appeals to some, but my feeling is that when I am buying a book of Sci Fi warfare I am not looking to be indoctrinated into any particular idealism, just want some escapism action. And when a character spends all of their time 'rationalizing' or engaged in a tedious decision making process, they are obviously not actually doing anything physical. Like braking things.
And then to start rehabbing the villain as the good guy, yeech. Just kill the damned things already, and quit dumping on the humans. We get enough of that form all the other advanced species of the universe, we don't need to do it to each other. A serious do not recommend. If you took out all of the chafe and just had the fight scenes, this book would be about 20 pages.
Read more
3 people found this helpful
Helpful
Report abuse

Joel White
3.0 out of 5 stars Long slow start, with characters you won't care about - until all of a sudden, it all gets better!
Reviewed in the United States on March 10, 2015
Verified Purchase
Really long slow start about characters I didn't care about - none of the Aldenata characters from books 1 - 4 are in this book, although it is set in the same universe and expands on the story.

All the characters are more like poor caricatures for a long section of the early part of the book, and they have really stupid nicknames instead of the rounded, realistic characters you expect from regular John Ringo works.

That said, it does get quite interesting - I don't want to ruin any of the surprise, but suffice to say, if you are reading through the book and are frustrated by the things I have listed in my first paragraphs - push through! It does start to get much better, and if you have been reading this series for a while, you will be especially satisfied with the things you learn about the Darhel and the Bane Sidhe.
Read more
One person found this helpful
Helpful
Report abuse
See all reviews

John Ringo
1.0 out of 5 stars Seriously bad
Reviewed in the United Kingdom on January 12, 2009
Verified Purchase
Sadly i have to agree with the previous reviewer. I have had this book, read about 90% of it, had it over a year and just can't find the enthusiasm to complete it.

It make me wonder how much of this book was written by Michael Z Willamson because I rate John Ringo as a superb writer and its disappointing he has put his name to a book of such poor quality.
Read more
3 people found this helpful
Report abuse

B. Bakla
1.0 out of 5 stars this is not Legacy of Aldenata Series
Reviewed in the United Kingdom on August 27, 2014
Verified Purchase
This was the biggest letdown I can remember.. The book HAS NOTHING TO DO with Military SCi-Fi and the story is completely detached from the original series' plot (Darhel, Posleeen, o'Neil etc). Selling this as "Legacy of Aldenata Series" is trickery, nothing less. Shame on you!
Read more
Report abuse

Jim M
3.0 out of 5 stars Three Stars
Reviewed in the United Kingdom on October 22, 2015
Verified Purchase
Sadly not up to the standard of the others in the series
Read more
Report abuse