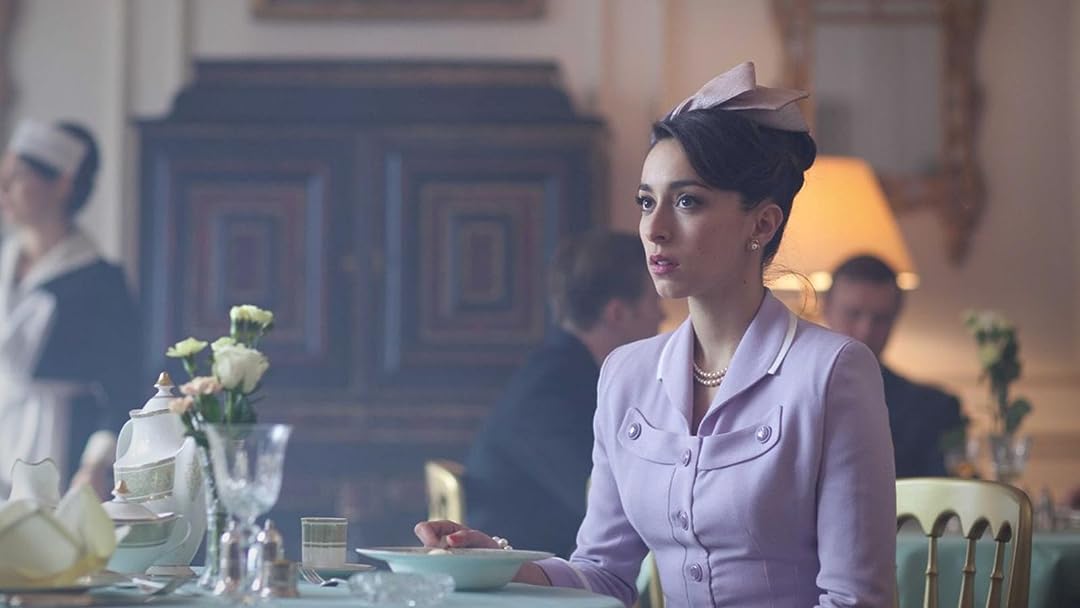 (1,328)
8.02011X-Ray13+
The Hour takes us behind the scenes of the launch of a new current events news program at the Lime Grove Studios in London during the mid 50s, with a highly competitive, sharp witted and passionate love triangle at its core. A controversial breaking story, entangles the news team in an intense interplay of politics, ambition and romance, ignited by a mysterious murder and chilling conspiracy.

Karen E. ManserghReviewed in the United States on April 21, 2015
5.0 out of 5 stars
The Hour Is Worthy of Your Time
Verified purchase
For some reason, I thought this was a British workplace comedy (like "The IT Crowd"), but when the man in the double-stitched overcoat is stalked and stabbed in the underground, I quickly shifted gears to appreciate the taut, multi-level thriller set in the deadline-imposed anxiety that fuels "The Hour"— BBC-TV's brand new "60-Minutes-style" news program. The program's fateful launch occurs in the summer of 1956—just before Egypt seizes the Suez canal, Israel (joined by British and French troops) invades Egypt, and Russia invades Hungary.

But those historical events only serve as backdrop for the clashing personalities of Hector (Dominic West), the handsome, womanizing news-reader, Bel (Ramola Garai), the over-qualified female producer, and her protege Freddie (Ben Whishaw), a neurotic, chain-smoking journalist/script writer whose talented prose and bulldog tenacity challenges the suits in the BBC, MI6, and Anthony Eden's government, and Clarence (Anton Lesser), BBC-TV's elderly, "let's not rock the boat," Head of News who just wants his last big project to be the successful capstone to his career.

Over the course of the first season, Freddie's promise to protect his childhood friend turns into a cat-and-mouse tale of espionage, and murderous cover-ups.

In the second season, Randall (Peter Capaldi), takes over the Head of News post, Hector's wife Marnie (Oona Chaplin), blossoms into a self-actualized character, Freddie brings a surprise with him when he returns from his "gap year abroad," and Kiki (Hannah Tointo), a sexy, blonde nightclub performer leads "The Hour" into the strangely convoluted worlds of bomb shelters, pornography, criminalized homosexuality, fascist hate-mongerers, real-estate speculators, the criminal underworld, and police corruption.
"

P. GleesonReviewed in the United States on June 8, 2015
5.0 out of 5 stars
This is the best television series since "The Wire
Verified purchase
This is the best television series since "The Wire," which in my opinion is possibly the best series ever. The performances on the "The Hour" are outstanding without exception -- Oona Chaplin fully fulfills her genetic promise and Dominic West brings the same complexity of character to his role here that made his McNulty on "The Wire" such a pleasure. Every member of this cast brings so much to their part. Which also tells us a lot about the producer, Ruth Kenley-Letts, and Coky Giedroyc, the lead director. The plot -- it is one developing plot through each season's episodes --is fully believable and taut. The editing is a marvel. Without being ostentiously tricky about it, the cutting is really smart and efficient. The one downside Charmaine and noted is that when you finish the last episode of season two you're going to be a little depressed. Probably BBC did the right thing in stopping this series after the second season--its very success probably ensured that the cast would be unaffordable going forward, for one thing, and then how do you keep this up for a third season? But I wish they'd tried anyway.
3 people found this helpful

R. MAYReviewed in the United States on July 4, 2015
5.0 out of 5 stars
An Hour (or six) not wasted.
Verified purchase
This is some of the best TV I've ever seen. Smart, stylish, gripping, with great, quirky characters and a real history lesson thrown in. The way they recreate the feel of the 50s is eerie (well, my memories only go back to about 1960, but a lot of the vibe is very recognizable). And the acting is superb, especially by Ben Whishaw, who is just a revelation. Somehow he folds into Freddie Lyon's character so many facets - whip-smart but a little naive ("Pregnant - is that what 'in trouble' means?"), not altogether mature but deeply sensitive and caring (as much about his elderly father as about the two women he loves), ebullient but deeply principled -- you just want to take him home and enjoy his company. But really all the characters have gravity and humor, they truly seem to connect with each other, and there is a real sense of chemistry among the whole ensemble.
2 people found this helpful

Bill MillerReviewed in the United States on September 25, 2015
5.0 out of 5 stars
a little Madmen feel to it but with great British ambiance
Verified purchase
Great casting, acting, writing. It's set in '56 so has a little Madmen feel to it but with great British ambiance . If you loved West in the wire and wonder if you could believe him as another character - this one works. And of course it's a history lesson that runs parallel to today's concerns. Democracy is only as good as the people who are in it and if no one is brave enough to ask the questions then we get what we deserve. Watch it if you like House of Cards, if you liked the movie Network and if you just love great character development, intrigue, sexy (but completely g rated except for one mild sex scene that seemed out of place because we already knew what was going on) intelligent shows. Only thing unauthentic is that all seem to have great teeth. And it's free if you have Prime. I've got Bezos' needle deep in my arm....
One person found this helpful

David WilderReviewed in the United States on July 30, 2012
5.0 out of 5 stars
Why does the BBC insist on producing such excellent work?
Verified purchase
A good friend once said that prior to each "really good" film I see I've already wasted about $300 dollars on 3 and 4 star films given "charitable" reviews. Thankfully, "The Hour," deserves its top rating. This BBC TV series is about a current affairs program being launched by (none other than) the BBC in June 1956, during the Suez Crisis. It is, in a word, splendid. This is a fascinating, coherent story with acting performances of exceptional range -- especially by Romola Garai and Ben Whishaw. But the difference may be "The Hour's" deep (and seemingly endless) supporting cast -- Dominic West, Tim Pigott-Smith, Juliet Stevenson, Burn Gorman, Anton Lesser, Anna Chancellor, Julian Rhind-Tutt and Oona Chaplin. There are no car crashes, only the sheer force of character and ideas.[[ASIN:B005ELEMV8 The Hour [Blu-ray]]][[ASIN:B005ELEN26 The Hour]][[ASIN:B005GT5AXM Episode 1 [HD]]].
4 people found this helpful

NoraxpatReviewed in the United States on March 26, 2015
5.0 out of 5 stars
BIRTH OF BRITISH TV NEWSCASTING
Verified purchase
I sometimes have a problem getting attuned to the Brit creative story line, the British accents and sense of drama; that aside, this was a very interesting tale of the development of televised news post-WWII, the magnetic attraction between the producer (female) and the two star (and rival) newscasters, and other members of the crew. There's a lot of supersleuthing by, especially, the younger male newscaster regarding the criminal underworld, police and political corruption, and personal relationships. Many newsworthy subjects are covered including racial intolerance by fascist thugs, and behind-the-scene studio dynamics. Of interest, this was an era when EVERYONE was a chain smoker, doubt there was a scene where
cigarettes did not have a dominant role.
One person found this helpful

H. CaufieldReviewed in the United States on April 3, 2015
5.0 out of 5 stars
The Hour You've Been Waiting For.
Verified purchase
Tight story lines, combined with tight skirts and dresses, not to mention superb acting, makes The Hour a series to watch. Set at a BBC news station in Britian circa 1956, the three main characters, Bel, Freddie, and Hector - producer, reporter, and presenter (anchor) - perform a veritable acting menage au trois while simultaneously being enmeshed in loyalty, betrayal, friendship, murder, conspiracy, topped with raw emotion and a dash of sex. A drama about news that's more interesting than the news. Worth your while. And remember don't binge. Savor every moment. You'll thank me.

Jack M. HaringaReviewed in the United States on June 23, 2015
4.0 out of 5 stars
Well-Acted, Smart Drama about the Early Days of BBC TV
Verified purchase
The first season of THE HOUR, a BBC show about...well, the BBC, mostly, but also about the Suez crisis in '56 and the British government's attempts to curtail the media, is some seriously snappy entertainment. Sure, the journalists are romanticized, and some liberties are taken with the history, but the performances, particularly from Ben Wishaw, Julian Rhind-Tutt, and Anton Lesser, and the scripts are very good. The story contains some nice twists. I had just watched FLEMING, set in a similar era, and this was a little more down to earth (and 60% less shagging). It was fun to see Anna Chancelor, who played the inspiration for Moneypenny in Fleming, show up as a tough foreign desk editor here. Edited to note that the second season is available. The way Amazon Instant Video lists seasons as separate shows made me miss that.
See all reviews
Back to top
Get to Know Us
Make Money with Us
Amazon Payment Products
Let Us Help You
EnglishChoose a language for shopping. United StatesChoose a country/region for shopping.
© 1996-2022, Amazon.com, Inc. or its affiliates