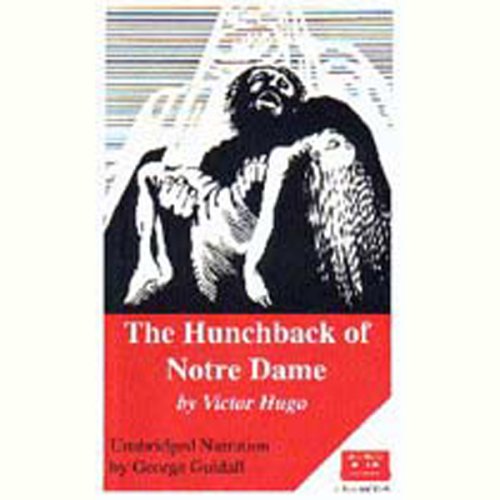 The Hunchback of Notre Dame

List Price: $32.50
You Save: $4.06 (12%)
By completing your purchase, you agree to Audible’s Conditions Of Use
Sold and delivered by Audible, an Amazon company
Share

4.5 out of 5 stars
4.5 out of 5
765 global ratings
How are ratings calculated?
To calculate the overall star rating and percentage breakdown by star, we don’t use a simple average. Instead, our system considers things like how recent a review is and if the reviewer bought the item on Amazon. It also analyzes reviews to verify trustworthiness.

Morgan
5.0 out of 5 stars Tough read-- So worth it!!
Reviewed in the United States on December 4, 2019
Verified Purchase
I will admit, this is a hard book to get through. It was the first unabridged classic I've read and it's not easy getting through some of the monologues, historical descriptions, and rants about philosophy. The first half of the book was especially difficult, because so many of the characters and scenes don't seem important to the plot. But trust me, they are. Victor Hugo brings everything together in a powerful ending that scrubs your heartstrings with iron wool and leaves you reeling for days! But this book, as Victor Hugo himself explained, isn't just about the adventure and romance. It's supposed to kindle in the readers a deep appreciation for gothic architecture. It's also supposed to capture and bring to life the culture and lifestyles of 15th century Paris- a time period that is increasingly overlooked and forgotten. So even though the tough parts of this book feel long, they still have tremendous value, and I'm so thankful I didn't stop reading halfway through (like I almost did). This book has had an incredible, lasting impact on me. It is now one of my most cherished reads.
So, yes, I absolutely recommend this book to anyone willing to read it. I also recommend listening to it on audio. The reader Philippe Duquenoy is phenomenal! He brings the characters to life and even reads through those long, tedious descriptions in an engaging way. Plus, if you get tired of the the descriptions, you can just tune them out until the actions picks up again, without giving up on the book! Also, really make the time you spend reading it fun. Watch the play. Listen to the soundtrack. Learn the music on an instrument. And whatever you do, don't give up on this incredible book!! It's a world-reknown classic for a reason. And you don't want to miss out.
Read more
29 people found this helpful
Helpful
Report abuse

Peter
5.0 out of 5 stars Read this book
Reviewed in the United States on November 2, 2018
Verified Purchase
If you watched Disney's "The Hunchback of Notre Dame" you do not know this story at all. It is completely different, and in a good way. Victor Hugo is a master storyteller. He introduces plotlines that twist and turn and you think "Why is he telling me this? Why all this exposition?" And then everything ties together in a crazy climax. It is gutwrenching. One of the most tragic stories ever written. Just read it, it's a classic.
Read more
40 people found this helpful
Helpful
Report abuse

Amazon Customer
3.0 out of 5 stars Avid reader, thought I could make it...boy was I wrong.
Reviewed in the United States on January 22, 2019
Verified Purchase
Honestly, I knew it was coming since I read the reviews, but I still underestimated how tiresome most of this book is.
As other reviewers have said, the actual story of Quasimodo and co. is such a small portion of the book in comparison to the actual length of the work. It was really quite difficult to get through.
If you find that the novels you read in high school (think Dracula, Hamlet, Catcher in the Rye, etc.) waxed poetic far too much for your taste, I would maybe look into an abridged version (no shade, that's what I was about to do) instead.
Quasi's story is rather good, but it's buried under lengthy descriptions of settings that (in my opinion) did little to enhance the reading.
Read more
17 people found this helpful
Helpful
Report abuse

Amazon Customer
5.0 out of 5 stars Beautiful! 😍
Reviewed in the United States on August 31, 2020
Verified Purchase
Truly a gorgeous book! I love the cover with it's super soft feel and it's pretty design and the inside picture is such a great touch! I love Victor Hugo, but this is one of his that I have never read so I'm looking forward to the read! As I have yet to read it, I cannot rate the story itself, plot or writing of course, but definitely a 5 out of 5 stars for the beautiful book itself and for the perfect condition that it came in! Would make a wonderful gift for any people in your life that love the classics! ❤
Read more

5.0 out of 5 stars Beautiful! 😍
By Amazon Customer on August 31, 2020
Truly a gorgeous book! I love the cover with it's super soft feel and it's pretty design and the inside picture is such a great touch! I love Victor Hugo, but this is one of his that I have never read so I'm looking forward to the read! As I have yet to read it, I cannot rate the story itself, plot or writing of course, but definitely a 5 out of 5 stars for the beautiful book itself and for the perfect condition that it came in! Would make a wonderful gift for any people in your life that love the classics! ❤
Images in this review

Amazon Customer
3.0 out of 5 stars A good book
Reviewed in the United States on September 22, 2019
Verified Purchase
Les Misérables is one of my favorite books. I have read it twice in French and three times in English. I had read The Hunchback of Notre Dame in English during high school and did not remember it very well, so it was fun to re-read in this translation. Unfortunately the book is weighted down with lots of politics and archeology that I found quite boring. The basic story is so captivating however that I read till the end. Fantastic for anyone interested in French history of the 18th and 19th centuries.
Read more
7 people found this helpful
Helpful
Report abuse

Hunyadi
5.0 out of 5 stars Great Story
Reviewed in the United States on October 5, 2019
Verified Purchase
Such a great story! I can't believe it took me this long to discover this book. This is my first Victor Hugo attempt and I really enjoyed it.

It may be detail heavy on certain things, may ramble and go into seemingly different directions, and may go overboard on certain descriptors: but it adds character to the story and gives the characters more dimension.

The Gypsy girl trying to discover her past, the obsessed priest who secretly delves into witchcraft and alchemy, and the outcast Hunchback (who oddly enough does not play a major role in the story). All the characters in my opinion are well developed and have depth.

What really got me was the human element of the characters and how easily I was sucked into the storytelling.

Top notch storytelling in my opinion. Thanks!

p12lr54
4.0 out of 5 stars A Classic with Sensible Translation
Reviewed in the United States on April 15, 2018
Verified Purchase
Good book, but I feel it loses something in the translation. This version seems to make more sense than some of the other versions I took a look at. More straightforward language is used. I have enjoyed it though and recommend it as far as the story goes.
Read more
13 people found this helpful
Helpful
Report abuse

Doris S. Edwards
5.0 out of 5 stars Classic and timeless
Reviewed in the United States on May 28, 2017
Verified Purchase
Believing Les Miserables to be a fine work of literature, I undertook the reading of The Hunchback of Notre Dame. One must persist through Hugo's long preliminaries to appreciate the tragedy of the tale. These somewhat tedious preliminaries are integral to the power of the whole. It is well worth the effort. Human nature and human folly are timeless.
Read more
20 people found this helpful
Helpful
Report abuse
See all reviews

RYAN FIENNES
5.0 out of 5 stars Best Book Editions
Reviewed in the United Kingdom on March 9, 2021
Verified Purchase
I purchased the Everyman's Library Classics Edition of this book. They are the best quality and best value editions you can purchase your favourite books in.
They have quality binding; acid free paper; ribbon page markers; and a dust jacket. There are a great range if authors available in these editions, and they are very well priced.
You will find the Everyman's Library Classics Editions, great value for money.
Read more
One person found this helpful
Report abuse

Tim
2.0 out of 5 stars Littered with mistakes
Reviewed in the United Kingdom on April 7, 2016
Verified Purchase
The story is good, but this version is full of typographical errors.
It looks as though the text was scanned in from a hard copy, but never checked. On most pages you'll find a mix up between 'h' and 'b' or 'i' and 'l'. Early on in the book, there's a random '58' which I assume is where they accidentally scanned in a page number. Some of the chapter headlines are confused with the opening sentences, and although this story has 11 parts, only the first 9 are listed and accessible via the contents. I guess they just gave up.
Read more
10 people found this helpful
Report abuse

Michael Brook
5.0 out of 5 stars Great
Reviewed in the United Kingdom on December 10, 2020
Verified Purchase
I have only seen the original films to this novel. This is the first time that i have read the book. Far far better then any film
Read more
Report abuse

Tutty
1.0 out of 5 stars Hunchback of Notre Dame
Reviewed in the United Kingdom on April 7, 2021
Verified Purchase
Awful read. Worst book I have ever read, second only to 'A tale of two cities'. I gave up after 200 pages. It may well be a classic but I lost interest after 200 pages.......
Read more
Report abuse

shaun
4.0 out of 5 stars Cracking yarn, as you would expect from Victor Hugo
Reviewed in the United Kingdom on February 24, 2013
Verified Purchase
These type of books are classified as "classics" for a reason, and that reason is the quality of the story. Unfortunately the quantity was (as usual for VH) a bit verbose. Lots of Latin I did not understand, but you soon get to know which bits to speed read and when to settle down and immerse yourself in this crackin yarn.
The book has some typos, but in general good value for money. You might want to read Les Miserables by VH. Most of the above comments apply to this.
Read more
4 people found this helpful
Report abuse
See all reviews
Back to top
Get to Know Us
Make Money with Us
Amazon Payment Products
Let Us Help You
EnglishChoose a language for shopping. United StatesChoose a country/region for shopping.
© 1996-2021, Amazon.com, Inc. or its affiliates