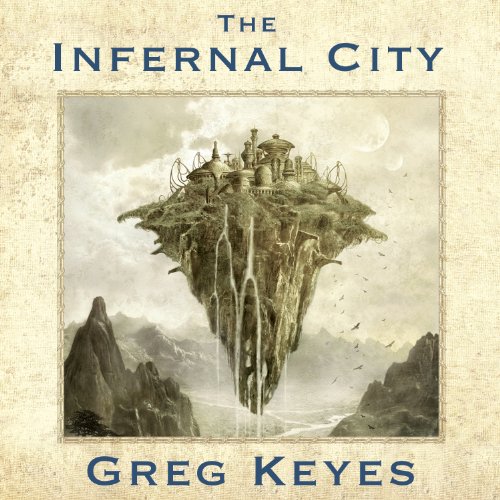 Four decades after the Oblivion Crisis, Tamriel is threatened anew by an ancient and all-consuming evil. It is Umbriel, a floating city that casts a terrifying shadow-for wherever it falls, people die and rise again. And it is in Umbriel's shadow that a great adventure begins and a group of unlikely heroes meet. A legendary prince with a secret. A spy on the trail of a vast conspiracy. A mage obsessed with his desire for revenge. And Annaïg, a young girl in whose hands the fate of Tamriel may rest.

Special invitation from Audible!
Learn more about Membership
List Price: $24.49
You Save: $3.54 (14%)
By completing your purchase, you agree to Audible’s Conditions Of Use
Sold and delivered by Audible, an Amazon company
Share

4.6 out of 5 stars
4.6 out of 5
895 global ratings
How are ratings calculated?
To calculate the overall star rating and percentage breakdown by star, we don’t use a simple average. Instead, our system considers things like how recent a review is and if the reviewer bought the item on Amazon. It also analyzes reviews to verify trustworthiness.

Gina
4.0 out of 5 stars A pretty good read for an Elder Scrolls fan
Reviewed in the United States on December 23, 2017
Verified Purchase
I'm a big Elder Scrolls fan and didn't expect much from a spinoff novel, but the two novels (The Infernal City + Lord of Souls) provide a good story with an easy read and lots of good lore bits that fill in the story between TES IV Oblivion and TES V Skyrim. It even loosely ties in the events of TES III Morrowind. The action starts in Black Marsh and we follow Glim, an Argonian, and Annaig, a young imperial woman, as they confront strange goings-on in the unsettled territory following the breakup of the Empire. Their concerns are soon overshadowed by a bigger menace, a floating city called Umbriel that brings with it hordes of undead that will eventually threaten all Tamriel. Through other point of view characters, we see post-imperial Elsweyr and Cyrodiil under the rule of Titus Mede. It will take a whole host of characters to confront the threat of Umbriel. The story is continued in Lord of Souls.
Read more
15 people found this helpful
Helpful
Report abuse

Mr. B
4.0 out of 5 stars Lore-lovers rejoice
Reviewed in the United States on April 29, 2017
Verified Purchase
Though many enjoy The Elder Scrolls games for open worlds, exciting adventures, and other such things, the games also possess a staggering amount of lore based on a fascinating fantasy universe. The Infernal City both draws from and adds to that existing lore. Introduction out of the way, allow me to break it down:

Cons:
- Typos aplenty
- Overuse of complex terminology hinders more often than adding to the experience
- Language and dialogue sometimes feel out of place compared to normal writing styles in the games

Overall, this book is absolutely worth a read for any fan of The Elder Scrolls. However, considering that it takes place in a well-established universe, it may be less enthralling to newcomers (or could lead to an interest in the games).
Read more
15 people found this helpful
Helpful
Report abuse

Daniel
5.0 out of 5 stars I really enjoyed it, and am starting to read the second ...
Reviewed in the United States on April 3, 2016
Verified Purchase
If you're an Elder Scrolls fan, you should get this book. I really enjoyed it, and am starting to read the second one, Lord of Souls. It's a rather short book you can finish in a few sessions, and it grabs you and makes you wanna keep reading it. I like reading, but don't do it nearly as often as I should, because I have to really get pulled into the story to get into it. The author's descriptions of things is great and really makes you imagine the ES universe. It is to note, however, if you haven't played the ES games or haven't gotten into the lore, you'll probably wanna pass on this or at least play the games first as there are some things that it doesn't account for, like it doesn't say what an Argonian is, and if you never played the games you wouldn't know that those are the Lizard people of Nirn, etc, etc. But overall, I really like this book.
Read more
8 people found this helpful
Helpful
Report abuse

Meagster
3.0 out of 5 stars A review from someone who did not know what the elder scrolls were
Reviewed in the United States on June 13, 2018
Verified Purchase
I was recommended this book from a website mentioning the best world building books. I had never heard of the elder scrolls before. As far as world building it deserves 5 stars. The world is unique and complex and everything I look for in my fantasy. Also the action was constant and enjoyable. I had a problem with the female main character. She could have been fleshed out more and sometimes her actions and behaviors seemed to have been based on female stereotypes. To be fair I find a lot of fantasy novels do this though! And lastly, although I did enjoy reading this book in the end I was not satisfied with where the plot ended up. For this reason I would probably not recommend this book to someone who wasn’t super into
World building or knew what the elder scrolls were. But I did enjoy it in the moment!
Read more
7 people found this helpful
Helpful
Report abuse

Kirby C.
3.0 out of 5 stars First of two Elder Scrolls novels by Greg Keyes.
Reviewed in the United States on September 27, 2013
Verified Purchase
"The Infernal City: An Elder Scrolls Novel" is a story based in the video game realm of Tamriel. I enjoyed the general plot, which is original and not based on any specific game quests. Because this book reads like fan-fiction, I definitely think it helps to have played "Morrowind," "Oblivion," and "Skyrim," in that order of relevance to this novel. I became a fan of these games starting with "Oblivion," and the events in the novel take place 40 years after the Oblivion Crisis between the "Oblivion" game and the "Skyrim" game. I didn't expect the novel to rely so much on the lore of "Morrowind." I believe there is much in the book that I could likely understand better and subtleties I missed because I'm not as familiar with "Morrowind."

I would have enjoyed reading the book more had not small annoyances taken me out of the story so often. First, the book could have been edited at least one more time. There are places where words are either repeated or missing, and there are spelling mistakes. Throughout the novel, I also had to go back and re-read because I couldn't figure out who was speaking. Speakers are too infrequently labeled, which causes confusion. The book contains too many characters in too few pages, which means that none of the characters are completely developed and aren't especially sympathetic. Fans of the video game series will see many inconsistencies in the author's writing. On the one hand, there are places where I enjoy recognizing a Khajiit name when I see it or recalling what Bravil looks like. On the other hand, in the first five or more chapters in the first part of the book, the names of characters aren't consistent with their characters' video game "races." Players of the games would call this "not lore-friendly." I don't think I've ever seen so many letter "X"s. I've played literally hundreds of hours of these games and have barely seen the letter "X." I honestly think that many of the names throughout the novel are weird for the sake of being weird, which is distracting.

Overall, "The Infernal City" is a niche novel based on a game franchise. If you are not a fan of the franchise before reading this novel, then I believe you might have difficulty understanding the context of the story, which might make it less likely that you will enjoy reading this book. I would give this novel two-and-a-half stars, if possible. I don't know if I should round down because I feel that the audience for this novel is limited or if I enjoyed reading it enough to round up. Bearing in mind that this is the first novel of two, I'll round up and hope that the second novel is better and that the story finishes strong.
Read more
7 people found this helpful
Helpful
Report abuse
See all reviews

Kindle Customer
4.0 out of 5 stars For fans and newcomers alike
Reviewed in the United Kingdom on January 20, 2019
Verified Purchase
If you don’t know the Elder Scrolls games, you will still enjoy this superb fantasy novel- and if you do know the games, then you will even more so.

What makes it is the truly alien setting of the floating city. It isn’t generic medieval fantasy setting #1,502. It is weird and unsettling, in the best way possible.
Read more
4 people found this helpful
Report abuse

Jamie
3.0 out of 5 stars Good, not great
Reviewed in the United Kingdom on April 17, 2019
Verified Purchase
Interesting enough story when it isn’t in the kitchen. The first half of the book is pretty slow but it picks up halfway through. Wouldn’t recommend it to people who aren’t familiar with The Elder Scrolls and it’s lore. Sul the Dark Elf was the most interesting character to me. Overall worth a read if you’re a fan of the series.
Read more
One person found this helpful
Report abuse

Alex Hodgkinson
3.0 out of 5 stars Great for Elder Scrolls, Bad Novel
Reviewed in the United Kingdom on May 28, 2013
Verified Purchase
Only get this if you're interested in the Elder Scrolls. The story is quite bad and the characters are the typical fantasy bunch, with possible exceptions in Mere Glim (name correct?) and Sul, who actually have emotion and make you want to find out more about them. This is definitely worth buying if you love Elder Scrolls, due to the references and the lore, but it isn't a very good novel. I mean, a book based mainly on kitchens? Really? But yeah, buy if you're an Elder Scrolls fan, don't if you're just looking for a good read.
Read more
2 people found this helpful
Report abuse

Mr. Mark Jones
4.0 out of 5 stars Great, for the target audience
Reviewed in the United Kingdom on May 15, 2014
Verified Purchase
If you are a fan of elder scrolls games, you will enjoy this book. It is competently written on the whole, although some sentences are a little confusing. (slap wrist for editors)

It is short, though. I feel a full book has been split into two. Still I enjoyed spending time in Vardenfell. and the characters are great, and the story moves on nicely. Definitely intend to buy the follow up book. or the other half of this one...
Read more
4 people found this helpful
Report abuse
See all reviews
Back to top
Get to Know Us
Make Money with Us
Amazon Payment Products
Let Us Help You
EnglishChoose a language for shopping. United StatesChoose a country/region for shopping.
© 1996-2022, Amazon.com, Inc. or its affiliates