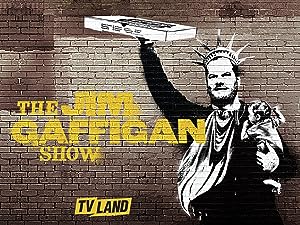 (357)
7.5201513+
Jim strives to find a balance between his stand-up comedy career and raising five children with his wife Jeannie.

Amazon CustomerReviewed in the United States on April 16, 2022
1.0 out of 5 stars
HORRIBLE
Verified purchase
My husband and I thoroughly enjoy Jim Gaffigan's comedy but this show is fowl! It's not funny; it stupid boy jokes. Jim is made to seem VERY stupid, thoughtless, rude. His friend is worse (the type of guy who considers hookers dating) and her gay friend is like every stereotype gone wrong. The woman playing Jeannie is the only likeable character but I can see her in better productions on the Hallmark channel. I regret purchasing this series and wish I could remove the mistake from my video library.

AMAZON: I'm begging you--please delete this series from my "Purchased" videos. I hate having to see the mistake every time I want to watch something.

BrooklynReviewed in the United States on October 4, 2015
5.0 out of 5 stars
The show started off well enough to make me watch more; then hit its stride
Verified purchase
I was debating between giving it 4 or 5 stars but the last 2 episodes (#10 and #11) clinched it for me to go with 5 stars. I think the show started off well enough that I wanted to watch more. And it doesn't hurt that on Amazon the shows are only about 20 minutes long without commercials, so you don't have to commit a lot of time, like you would for a movie.

I think the middle episodes kind of ran together a little bit, thematically, but episodes #10 and #11 were a little different, both in theme and character. (His wife got to join him outside the home in one - she's always home with the kids - and then the actress who plays his wife got to play the flip side of her character as a tatooed bar owner.) They were well-written, also.

I also liked seeing all the cameos by comedians. And the last episode was chock-ful of cameos. (And who doesn't love Steve Buscemi?)

The one downside is that Adam Goldberg, who plays his best friend, Dave, is a charm-less curmudgeon. Regardless of the writing, I think a different actor could have played this playboy pessimist character more charmingly.

RosalucReviewed in the United States on July 16, 2015
5.0 out of 5 stars
Loved it
Verified purchase
A warning - NOT for kids. I made the mistake of sitting down to watch the free episode with my children and soon realized my error. Some language (but the scene warranted it and was HILARIOUS!) I am SOOOO glad to have a show that features a healthy attitude towards children and married life in general - even though Gaffigan is no "prince charming". I read that his character is a portrayal of him about 10 years ago when he was more of a . . . er . . . . slacker. His wife's character is strong and devoted to her kids but also relatable in that she definitely has her own quirks. All in all, I was cracking up. I have seen his stand-up and, while I enjoy much of it, I think I actually enjoy him in this format better. (I was reading reviews where people claimed the show was boring/not good/nothing like his stand-up - not sure where they are coming up with this impression) This show seems right in line with his comedy except you get to watch him eating fudgsicles WHILE he is being sarcastic at the same time. His conversations with his wife are witty and show a LOT of history between them (they know each other well). Also, I am so thankful for the portrayal of the African Catholic priest. As an actual practicing Catholic (I go to Mass every Sunday and strive to fully understand all the tenets of the Catholic faith - they are all explained - you just have to look) I have met a bunch of priests a lot like him. So awesome to see!!!
22 people found this helpful

I think the finale alone, which is a brilliant parody of It's a Wonderful Life, is worth watching this show. If you are a fan of Jim Gaffigan's various stand up shows released by Comedy Central, you will love this.

Not only is this show funny, but the way it deals with some weighty issues such as family, marriage, and religion are very intelligent and thoughtful, always managing to show both the highs and lows but with the assurance that it will all end happily ever after.
4 people found this helpful

Emil AmokReviewed in the United States on July 30, 2015
5.0 out of 5 stars
Gaffigan good, but ensemble cast is what makes this great
Verified purchase
Gaffigan is good, but this is just a great ensemble cast. I've always liked Goldberg from that nutty Delpy film he did, but the gal who plays Jim's wife in this is extremely watchable-- even with clothes on. She just doesn't look like she's had five kids. Or that she takes care of them all. Acting! Michael Ian Black is funny because we all have a friend like that, right? Jim is always funny. And he's not afraid to show some skin in an undersized hotel terry cloth robe. So can you tell I'm procrastinating from something really important that I'm writing this review? I just am glad the show is available on Amazon. By the time I find TVLand on my channel list, the show's over. I run into informercials with greater regularity. So thank the comedy gods, the show is available here. One thing I like about Gaffigan, he doesn't get caught up in the auteur idea like Louie. Louie is great, but dares to be not funny.Which isn't funny. But it's admirable and artistically winning as an experience. Gaffigan doesn't forget the sitcom's main objective: laughs. With more kids than Louie AND A WIFE, he should be more depressed than the Louie character. But unlike Louie, Gaffigan doesn't do the dark side (unless it's chocolate cake), and thwarts it all with a good laugh, and a self-referential hot pocket joke. It doesn't have to be heavier than that. Not on TVland. But I am a biased fan of Jim's standup. And I appreciate his Catholicism. (The African priest character is great). And I like his inclusion of Asian Americans and others with the self-absorbed New Yorkers. And surprise,surprise. It's a cable show where everyone keeps their clothes on! Thanks Jim for a great show. Saw you at an open mike in NYC in the winter. Eastville. Probably when you were making the series.It was late. I can vouch for you.There was no food anywhere near you.
5 people found this helpful

David B. SableReviewed in the United States on June 26, 2016
5.0 out of 5 stars
Very funny with a refreshingly workable traditional faith and an underlying desire to be a good father and husband
Verified purchase
Very funny but he actually loves his family and wants to be a good dad. In a world where traditional faith is spurned for the more hip "what's in my heart" spirituality, it is refreshing to see Catholicism cast in a way that actually works meaningfully as a part of one's life. Some comedic implications imply sexual edginess but always in the context of Jim wanting to do the right thing, not "isn't it cool to be unrestrained?"
3 people found this helpful

DanReviewed in the United States on October 22, 2019
5.0 out of 5 stars
Super funny
Verified purchase
Jim Gaffigan is the king of stand up comedy. Nobody gets when close to his level. Other comedians just curse and they think that they are funny. It takes a lot of talent to do what Jim Gaffigan does. Clean, clever, funny. Everytime I watch any of his work, I end up laughing so much that is difficult to stop!

JeffCJReviewed in the United States on August 3, 2016
3.0 out of 5 stars
Not really the Jim Gaffigan I love
Verified purchase
I love Jim Gaffigan, but this show to me doesn't really do it for me. Someone obviously wanted to build a sitcom around him using the standard modern sitcom formula... but one of the things most of us (I assume) like about Jim Gaffigan is that he isn't the standard modern formula. It's not the clean fun that we've come to expect from him, and while it's not bad, my wife and I found it a little... weird.
2 people found this helpful
See all reviews
Back to top
Get to Know Us
Make Money with Us
Amazon Payment Products
Let Us Help You
EnglishChoose a language for shopping. United StatesChoose a country/region for shopping.
© 1996-2022, Amazon.com, Inc. or its affiliates