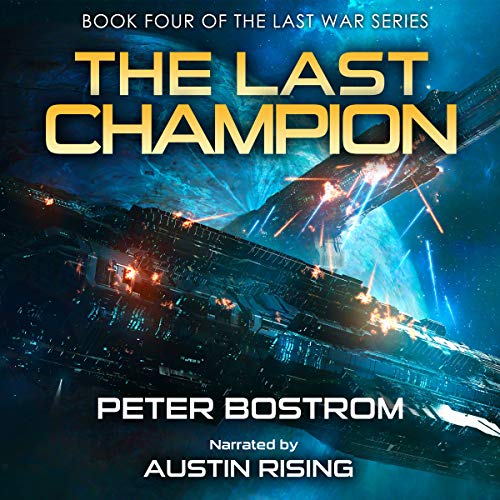 The Last Champion: Book 4 of The Last War Series

Admiral Jack Mattis thinks Spectre, humanity's nemesis, has been defeated. And he sacrificed the USS Midway, to do it.

4.4 out of 5 stars
4.4 out of 5
148 global ratings
How are ratings calculated?
To calculate the overall star rating and percentage breakdown by star, we don’t use a simple average. Instead, our system considers things like how recent a review is and if the reviewer bought the item on Amazon. It also analyzes reviews to verify trustworthiness.
Top reviews

Jas PTop Contributor: Star Wars
VINE VOICE
3.0 out of 5 stars Disappointing
Reviewed in the United States on June 30, 2018
Verified Purchase
I have to be honest, when I pick up a book like this, I pick it up because I am not expecting an award winning piece of literature (no offence to the Author), I am expecting to be entertained by a fast paced, action thriller, with fantastic ship combat, both capital and fighter, some great characters (not earth-shattering, sometimes you get a surprise, but I do expect a good set of characters with some dramatic/humorous dialogue, and a decent background, that builds and builds as the story goes on), and it is always nice to have an inventive bit of world building as well. Parts 1 and 2 easily fulfilled this in this series, and they even provided a great storyline with a lot of little sub-plots, but the ship-to-ship action was exceptional, and Admiral Mattis, the grumpy old Admiral who just won’t give up, and always survives against the odds, was a great character, along with his bridge crew, the robotic Modhi, and the eager to please Lynch, as well as a few others. Even the reporter Ramirez, Mattis’ old flame added a touch of amusement.
I was still on-board with Part 3, although there was some things starting to occur that could have happened that went either way, however, the combat, the characters, even Mattis losing the Midway and the death of some other major characters showed that the Author was willing to not always give us ‘Mattis always wins’ scenarios.
But Part 4 unfortunately has been a disappointment. Apart from a real lack of combat, either in starships, or ground-based marine/special forces action, the actual storyline has become very convoluted and almost lost in itself. The almost ‘Matrix’ like scene in which dozens of the same clone come pouring into a room to confront the crew was just laughable, and not in a good way.
And there are just so many bad plot actions turning up in the story now that it is making the story quite unbelievable (yes, sure, it is Sci-fi, and therefore, um – not real, but there is always an element of realism or authenticity you expect – Admirals are the same rank, so why can one order the other one around? Why is everyone always so worried about an Admiral doing his job and following up on the bad guy and determined that he be behind a desk? Why did bullets bounce off the Future Humans in one instance and later, penetrate them? Then there is the whole baby thing…)
I don’t want to go into too much and give away too many spoilers, but needless to say, part 4 has really lost its way and I was disappointed in the story, especially after parts 1 and 2 had been so good. Hopefully part 5 is better?
Read more
Helpful
Report abuse

Dan
3.0 out of 5 stars Narrator change bad choice
Reviewed in the United States on July 9, 2019
Verified Purchase
The only reason it doesnt get 5 stars is the change in the narrator. I listen to audio books at work and I am really getting into the series. I love the story line and the characters. A new narrator brings different voices to well established characters. The worst is the Reardon brothers, for 3 books they're good old Americans but in the fourth book they completely change nationalities. Still loved the story but was really hard getting used to different voices. If your s reader, I heartily recommend this book. If your a listener like me you just have to focus on the story and roll with it.
Read more
Helpful
Report abuse

Phil King
5.0 out of 5 stars Time for hope,or Jesus to come back.
Reviewed in the United States on October 14, 2019
Verified Purchase
Earth Apocolypse. Only the extremely sick would destroy a habitable world. But scifi offers the impossible, and mYbe earth will Reform. Maybe Mars will be terraformed, havent read that yet, but lets hope.
Read more
Helpful
Report abuse

eric quinn
3.0 out of 5 stars Welllll
Reviewed in the United States on August 17, 2019
Verified Purchase
Still a lot of action, but it feels like somethings missing, like somethings have been edited out or not actually written into the story. Also things are getting a bit predictable. Except for a couple of twists.
Read more
Helpful
Report abuse

Amazon Customer
2.0 out of 5 stars Boring
Reviewed in the United States on December 28, 2019
Verified Purchase
Very slow starting and action starts lst we Dr in the book, unlike most other SyFi books. In fact it was so slow and uninteresting I almost out it aside partially read.
Not your best work.
Read more
Helpful
Report abuse

Robert Konka
5.0 out of 5 stars Enjoyable
Reviewed in the United States on August 26, 2018
Verified Purchase
Great story the characters were individually driven and believable, the ending was well done without leaving to many questions of what was going to happen.
Read more
Helpful
Report abuse
See all reviews

daddydog99
5.0 out of 5 stars A great page-turner from start to finish leaving you wanting more!
Reviewed in the United Kingdom on August 18, 2018
Verified Purchase
Four books read so far and can't wait for the fifth... If you enjoy a fast read with great characters, space battles, 'aliens', political manoeuvring and plot twists, you'll love this series of books. The main character, Admiral Mattis, despite being at the point of retirement, is the grizzled hero who finds himself at the centre of a battle to save humanity from an insidious enemy. The character dialogue, which is often humorous, is also enhanced with the characters thinking prior to, during or after the words are spoken - this really helps to build each characters background and psyche. In addition to Mattis, we have the XO, Commander Lynch and the robotic engineer Modi always trying to get one-up on each other - makes me chuckle. The author is not afraid to kill of some of the main characters when you least expect it. Really looking forward to book five.
If you read the first book in this series, I'm sure you'll be hooked. And if you like it, check the authors other books under his real name, Nick Webb.
Read more
Report abuse

Colin
5.0 out of 5 stars A bit of everything, would recommend to anyone who enjoys space battles and conspiracy
Reviewed in the United Kingdom on June 18, 2018
Verified Purchase
4 well told stories. The off-ship dialogue got lost occasionally; however, the main battles were really well told. Would recommend to anyone
Read more
Report abuse

Romerton
5.0 out of 5 stars Excellent Book
Reviewed in Canada on September 28, 2018
Verified Purchase
Could not stop reading. I will be getting the next book when it comes out. This is an amazing series.
Read more
Report abuse

Alan
2.0 out of 5 stars Off on a tangent
Reviewed in Canada on July 5, 2018
Verified Purchase
I felt the story line has gotten lost within all the genetics hocus pocus. The series is starting to anoy me.
Read more
Report abuse
See all reviews
Back to top
Get to Know Us
Make Money with Us
Amazon Payment Products
Let Us Help You
EnglishChoose a language for shopping. United StatesChoose a country/region for shopping.
© 1996-2021, Amazon.com, Inc. or its affiliates