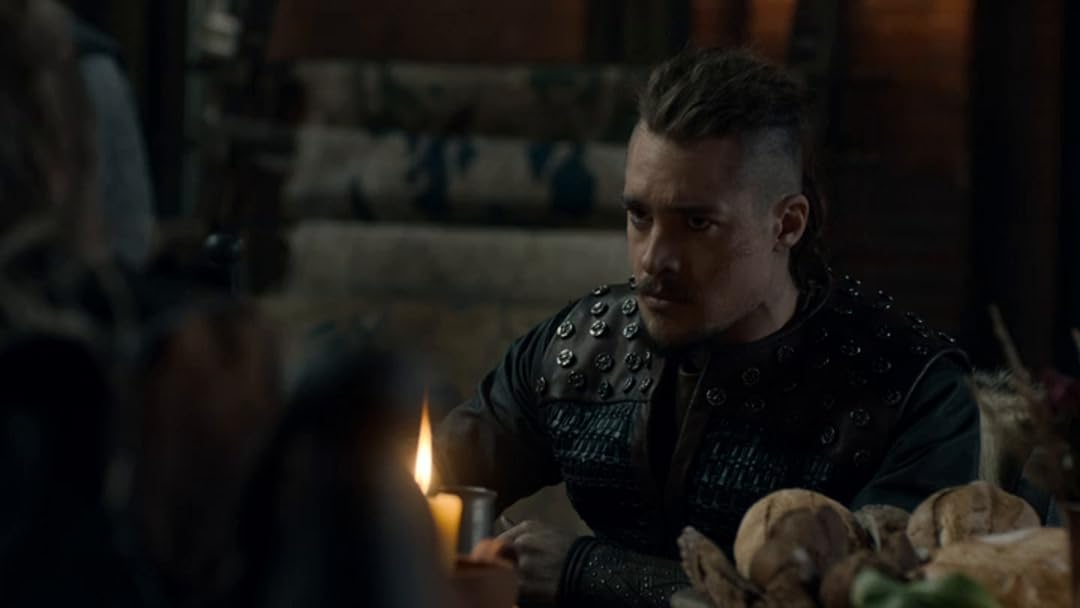 (1,878)
2018TV-14
The third installment of "The Last Kingdom," based on books five and six - "The Burning Land" and "Death of Kings" - will see King Alfred consider his legacy as his dream of uniting the kingdoms of England is jeopardized by incessant Danish attacks.

GeadaReviewed in the United States on December 19, 2018
5.0 out of 5 stars
Nothing can compare
Verified purchase
Outstanding storyline, writing, set, and tremendous acting/directing. You are there, you are engaged with all
the characters, events...How did such a magnificent series come about? Thank you, Bernard Cornwall for Ultred of
Bebbenburg...and the history of England's struggles with the Danes/Northmen. I never tire of watching the series or reading the books. My life is enhanced.

Thucydides Reviewed in the United States on January 14, 2019
5.0 out of 5 stars
Thoroughly excellent series when judged by every criterion -- and it only gets better!
Verified purchase
View "The Last Kingdom" Series from ANY perspective -- acting, casting, directing, sets, costumes, and development of a storyline. What a thoroughly excellent series -- brought to an even greater level of engaging enjoyment now in Series 3. Although only one superb performance among many, the performance of David Dawson as King Alfred is absolutely breathtaking and haunting. In every way that I can perceive the man, Mr Dawson IS King Alfred....

The only criticism I still see regarding the Uhtred televised series is that the storyline deviates at times from what Bernard Cornwell wrote in his masterful, epic series of books. I've read all of Mr Cornwell's "The Saxon Tales" (the "Uhtred" books), and I'm very pleased with the approach taken by the producers of the televised series, and the development of the plot lines -- especially given the limitations imposed by the presentation of such epics in a televised timeframe! In other words, if the 'purists' had their way, with absolute fidelity to every word of Cornwell's novels accommodated, it would probably take no less than ELEVEN separate season series to achieve this task -- one series for each of the 'Uhtred' books.... I'm absolutely delighted that we have THREE, because such a great job has been done with them!

Good news -- it appears that there will be a Season 4, perhaps by mid-2020, and I will eagerly await that, too. Oh, I suppose it goes without saying, but if you order this series on disk, be sure to get it on Blu-ray! It is well worth the few extra dollars considering the quality of the images themselves, and the soundtrack.

Really, to all the cast, crew, producers, directors, and everyone who worked on this magnificent series -- thank you!

Just Another MikeReviewed in the United States on January 4, 2019
5.0 out of 5 stars
Forget Winterfell. Bebbanburg Is the Real Prize.
Verified purchase
Quality of the recordings is excellent, and that is just what this program deserves. Season three reflects the increase in budget, but the writing is still the backbone of the series. There are flaws but they are minor, and when one analyzes the plot development, one finds very few inconsistencies or forced contrivances in the story arc.
I’ve read the books and certainly liked them as well, but I think I would have gotten tired of watching ships burn, which seems to be Uhtred’s “go to” move in the novels. On the other hand, I missed the use of Alfred’s ship to raid Wales, and the ruse involving the angels, but generally, the television episodes are on par with the books.
17 people found this helpful

History BuffReviewed in the United States on December 7, 2019
3.0 out of 5 stars
Almost great
Verified purchase
I love The Last Kingdom don't get me wrong. It's hard not to binge on these. I am not going to pick on the accuracy of this because Cornwell wrote these books as fiction. It is a very interesting show. The third season starts out with Alfred's health fading and the problem presented in this season is 'Who will replace Alfred?' Alfred wants his young son Edward who is unsure of himself. His sleazy nephew has his own plans and the norsemen are waiting for Alfred to kick off so they can move in and take over. It's very interesting and very good. There were two things I didn't like. 1.) All seasons of this show have some woman howling and screaming during the credits and occasionally during the show. It's like instant Yoko Ono and to say I hate it is a vast understatement. I zap through the credits but the screaming that the producers of this show must think is music occurs in other places too. It totally is a downer. 2.) The third season introduces a seer chick who goes after Utrid. She is really beautiful (better looking in real life than on the show) but she is the personification of evil. I guess she's suppose to be the devil trying to get Utrid's soul or something. You spend every episode wondering why he doesn't kill her and worried he's going to lose himself in her. In the first episode she comes across so gross and disgusting it really makes you dislike her. Later on she acts more normal but the damage is done. Even my husband hated her and like I said, she is a babe. I really wished the show could either have kept Utrid married to his wife or with some likable person so having her in the show was a downer. She is not in the books so you can see that the writers go Hollywood. Instead of being faithful to the books they introduce her probably to attract more men viewers. I am one of those weird women who likes 'guy' movies better than chick ones. Sometimes I think a love interest just detracts from the plot. Such is the case in this season. There were some very satisfying parts in here for those who have been frustrated by Alfred's lack of interest in Utrid as a human being. Some very good parts. I am looking forward to season 4 because now that the 'obsessed with a witch' plot has been used it is bound to be better. I do wish they'd get better 'music' though.
7 people found this helpful

DLCReviewed in the United States on December 19, 2018
5.0 out of 5 stars
Excellent Series...binge out on it
Verified purchase
Hope it continues ... have watched it from the beginning. Acting, costumes, settings, music -- all excellent. Looking forward to more ahead in this fine period series! I know I will return to it again and again over the years.
11 people found this helpful

Marie33Reviewed in the United States on December 29, 2018
5.0 out of 5 stars
Awesome Show!
Verified purchase
I love The Last Kingdom, and season 3 is fantastic! Even though the plot differs from the books, it is very engaging and enjoyable. The actors are excellent, and the characters are well developed. Highly recommended!
10 people found this helpful

Bonnie DicksonReviewed in the United States on April 25, 2019
4.0 out of 5 stars
Don't expect this to be just like the books
Verified purchase
My husband and I enjoyed this third season quite a bit, but not as much as we did the first two. Part of the problem is that we've both either read or listened to the audiobook of all of the books (so far). We understand that movies frequently stray from the books they are adapted from. The first two seasons don't stray too far from what Cornwell wrote. This third season makes some pretty startling changes, killing off two characters that have lived through all of the books so far. Maybe this was because the actors were unavailable either midway through the filming (in one case) or after the season ended (in another). I have no idea if this is the case or if there was some other good reason. This naturally lead to some other plot changes.

As with the first two seasons things get pretty violent in this one.

StoneyReviewed in the United States on February 16, 2021
5.0 out of 5 stars
Incredible blend of history and fiction
Verified purchase
This series just gets better with each episode. Literate script. Fine acting and character development. Incredible visuals and choreography. The finale of season three concludes with the confrontation at 'Bedanford' and a personal resolution for Uhtred. Don't expect historical accuracy---the series is a blend of history and fiction for an era that few Americans and I suspect few British really understand or appreciate. Take it on its own merits and they are exceptional. On to season 4 and will be waiting for 5!
See all reviews
Back to top
Get to Know Us
Make Money with Us
Amazon Payment Products
Let Us Help You
EnglishChoose a language for shopping. United StatesChoose a country/region for shopping.
© 1996-2022, Amazon.com, Inc. or its affiliates