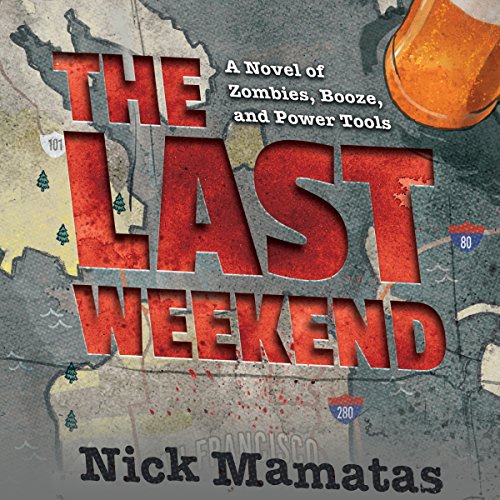 Vasilis "Billy" Kostopolos is a Bay Area Rust Belt refugee, a failed sci-fi writer, a successful barfly, and, since the exceptionally American zombie apocalypse, an accomplished "driller" of reanimated corpses. There aren't many sane, well-adjusted human beings left in San Francisco, but facing the end of the world, Billy's found his vocation trepanning the undead, peddling his one and only published short story, and drinking himself to death.

Things don't stay static for long. Billy discovers that both his girlfriends turn out to be homicidal revolutionaries. He collides with a gang of Berkeley scientists gone berserker. Finally, the long-awaited "Big One" shakes the foundation of San Francisco to its core, and the crumbled remains of city hall can no longer hide the awful secret lurking deep in the basement. Can Billy unearth the truth behind America's demise and San Francisco's survival - and will he destroy what little's left of it in the process? Is he legend, the last man, or just another sucker on the vine?

Enjoy this audiobook free + more
Learn more about membership
List Price: $19.95
You Save: $7.96 (40%)
By completing your purchase, you agree to Audible’s Conditions Of Use
Sold and delivered by Audible, an Amazon company
Share

Lauren Fields
5.0 out of 5 stars How to Successfully Read The Last Weekend
Reviewed in the United States 🇺🇸 on February 3, 2016
Verified Purchase
- First read The Lost Weekend by Charles Jackson (or see the movie if you're just a tourist about it), and anything else you can think of written about writers and drunks (especially when they are authored by drunken writers--Hemingway, Bukowski, you know the drill), and then congratulate yourself the whole time just like the protagonist for knowing so much more than will ever be appreciated by the mind-dead zombies of the world.

- Have a good idea of just how awful men can be in an apocalyptic scenario, then compare that marauding rapist to Billy the Greek over here, and then don't even pretend you wouldn't be happy to know this drunken dork at the end of the world (the end of America, actually—the world’s probably better off after the US gets wiped out).

- Get the concept of zombies but don't be married to any preconceived notions about how they should emotionally impact the living (like there's a right way to deal with zombies? Doubt it).

- Know that government jobs without regulation or rigor will totally survive any mass-scale disaster (like roaches, bureaucracies will survive unchanged), and get that people who do the most vital jobs are often the least vital living (next step down is a reanimated corpse).

- Know anything about California demographics, stereotypes, and neighborhoods, or at least try to enjoy the breeze of jokes flying over your head (if you're like the protagonist you'll be from a flyover state anyway, and pretty used to that feeling).

- Love gender equality enough to appreciate that men and women alike will all be selfish, reckless, and bat-crap crazy if they’re the kind of outlier who can survive a sudden zombie awakening.

- Want to read a zombie book for those who are not and don't even care to be heroes, know that tools are better than guns even when neither one is likely to save you, and trust that you'll like this book if you want to.
Read more
2 people found this helpful
Helpful
Report abuse

Elizabeth
5.0 out of 5 stars A thinkers zombie apocalypse.
Reviewed in the United States 🇺🇸 on January 11, 2022
Verified Purchase
Refreshing in a genre that gets old quick. I enjoyed the writing style (first person I think). The characters were well developed and the author deftly avoided the clichés of other zombies novels but still had plenty of zombie killing grisly action to satisfy.
Read more
Helpful
Report abuse

Grimalkin
5.0 out of 5 stars The Last Weekend Is a Holiday From Zombie Drudgery
Reviewed in the United States 🇺🇸 on March 11, 2016
Verified Purchase
Although I am weary of zombie tales, I am a devout follower of Nick Mamatas since I discovered his novels a few years ago. The Last Weekend did not disappoint, and I was relieved to find that there were no graphic scenes of the shambling dead devouring intestines or chomping on thigh bones. As always, I am intrigued by the author's acerbic outlook on life and wonder how much of his experiences as an American of Greek descent are true or fictional.

A few years ago, Mamatas recommended the novel The Lost Weekend, which I read and enjoyed. There are some elements of the Charles Jackson book, although the narrator of The Last Weekend, Vasilaki aka Billy, is not battling alcoholism but embracing drink in the spirit of nihilism and drilling. Another influence, of course, has to be Richard Matheson's I Am Legend, but the distinct voice of Mamatas prevails and surrounds the reader with a unique and entertaining story of one man's fight to survive against overwhelming odds.
Read more
4 people found this helpful
Helpful
Report abuse

Matt D
2.0 out of 5 stars Kind of like a bunch of college freshman poets sniffing their own farts and declaring them important. metaphorically speaking.
Reviewed in the United States 🇺🇸 on April 24, 2018
Verified Purchase
You get the feeling the author has definitely read Salinger, Joyce, Kerouac etc. Then decided to write something that could be a boring novel they torture you with in high school, but it's about Zombies and wouldn't be caught dead name dropping authors as plebeian as the above. Except it's not really about zombies, most of the time it's whining about being a drunk and having women problems.

The meta narrative is that it's really America that's the zombie.

In all, it's kind of stupid, might be a bit absurdist, but isn't funny or entertaining. At best it's mocking the kind of self important intellectualism it revolves around. The only reason I offer that as a possibility is that it wraps it all up in a zombie novel.

I give it two stars because the author is actually capable of writing and either they or their editor made some effort to keep it form totally going into torpor in the middle. They just chose to use those skills to make this.
Read more
5 people found this helpful
Helpful
Report abuse

Amazon Customer
3.0 out of 5 stars It's not exactly leisure reading
Reviewed in the United States 🇺🇸 on February 12, 2019
Verified Purchase
The author seems to be mocking confessional, boozed-up, masculinist literature by inserting zombies into it. It's well-written and all, very English major-y...experimental. But it doesn't exactly work as leisure reading. The protagonist reads a lot and constantly thinks about people like Noam Chomsky and Edward Said. The satire is entertaining for a while, but eventually the book ends up being as boring as the literature it's mocking. At least, I have to assume it's meant to be satire and not a heartfelt attempt to write "Henry Miller vs. the Zombies."
Read more
Helpful
Report abuse

Kimberly Kefalas
5.0 out of 5 stars I really enjoyed this. To be honest
Reviewed in the United States 🇺🇸 on October 7, 2016
Verified Purchase
I really enjoyed this. To be honest, I love zombie novels and I'm not yet sick of them. Nick's book, though, really reaches above the rest of the zombie pack (ha ha) and provides us with a great character study: how does the zombie apocalypse impact a real person (as opposed to the innately heroic we typically see in starring roles)? Does he rise to the occasion? I found the backstory/history super interesting and the book is well plotted even with the alternating timeline.
Read more
3 people found this helpful
Helpful
Report abuse

HalJ
5.0 out of 5 stars Maybe he’s born with it...
Reviewed in the United States 🇺🇸 on March 10, 2019
Verified Purchase
Maybe it’s Mamatas! Amazon book reviews are cringeworthy, so I won’t go into detail, but this one really is fantastic. Mamatas has got the goods. Here he recontextualizes old tropes and roasts the zeitgeist on a spit. Books, blogs, articles, whatever, the guy never leaves me bored.
Read more
Helpful
Report abuse

Christoph Paul
5.0 out of 5 stars If Henry Miller Wrote A Zombie Novel
Reviewed in the United States 🇺🇸 on July 2, 2016
Verified Purchase
I didn’t realize how much I wanted Henry Miller to write a zombie novel until I read The Last Weekend. The novel has the vibe and tone of Tropic of Cancer but a plot & zombies! It is as great as it sounds. Mamatas wrote a really smart, entertaining, and original zombie book. I pre-ordered his new novel I Am Providence because of how much I enjoyed The Last Weekend.
Read more
3 people found this helpful
Helpful
Report abuse
See all reviews