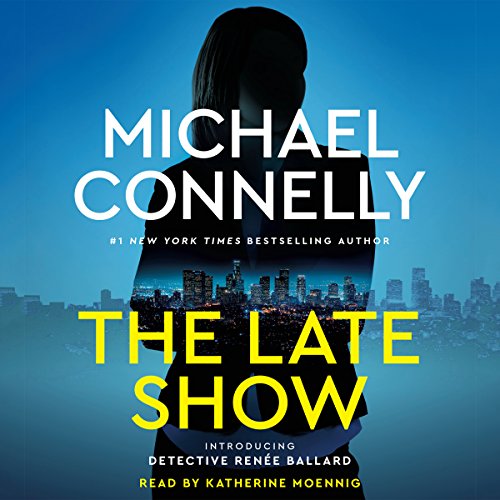 From New York Times best-selling author Michael Connelly, a new thriller introducing a driven young detective trying to prove herself in the LAPD.

Renée Ballard works the night shift in Hollywood, beginning many investigations but finishing none, as each morning she turns her cases over to day shift detectives. A once up-and-coming detective, she's been given this beat as punishment after filing a sexual harassment complaint against a supervisor.

But one night she catches two cases she doesn't want to part with: the brutal beating of a prostitute left for dead in a parking lot and the killing of a young woman in a nightclub shooting. Ballard is determined not to give up at dawn. Against orders and her own partner's wishes, she works both cases by day while maintaining her shift by night. As the cases entwine, they pull her closer to her own demons and the reason she won't give up her job, no matter what the department throws at her.

Special invitation from Audible!
Learn more about Membership
List Price: $30.79
You Save: $3.80 (12%)
By completing your purchase, you agree to Audible’s Conditions Of Use
Sold and delivered by Audible, an Amazon company
Share

4.5 out of 5 stars
4.5 out of 5
12,070 global ratings
How are ratings calculated?
To calculate the overall star rating and percentage breakdown by star, we don’t use a simple average. Instead, our system considers things like how recent a review is and if the reviewer bought the item on Amazon. It also analyzes reviews to verify trustworthiness.

Colonel DTop Contributor: Star Wars
VINE VOICE
3.0 out of 5 stars Room to grow for this new series from Michael Connelly
Reviewed in the United States on July 21, 2017
Verified Purchase
3.5 stars for this new Michael Connelly novel which introduces another character in his L.A. universe, LAPD Detective Renee Ballard. Clocking in at 405 pages the pace is brisk and filled with the details of police procedure typical of Connelly's popular 'Bosch' series. Renee's from Hawaii, single, and lives out of a van and sleeps in a tent on the beach with her rescue dog Lola- she's essentially homeless by choice. She works what's known as the 'late show', the night shift at the LAPD where she was exiled after a failed sexual harrassment complaint against her supervisor. Her greatest frustration is not being able to follow through on cases and having to hand them off in the morning to the day shift detectives. In this novel Renee decides to swim up-stream and pursue two cases; a brutal assault of a transgender prostitute and a multiple homicide nightclub shooting on her own.

Overall I found this book engaging but was not all that enchanted with Det. Ballard. She is a loose cannon and she shares Harry Bosch's iconoclastic anti-authority style. Bucking authority for a junior detective seems like a poor approach if she's interested in career longevity; Bosch's been around for decades and "earned" the right to challenge bureaucracy but Ballard has not. Unlike Bosch young Renee is tech saavy and we get a few too many details about what apps she's using on her i-Phone and how she does internet data searches.

Her lifestyle is kind of weird, the sleeping on the beach thing to begin with and she's apparently an insomniac who almost never sleeps. Why she rescued Lola the dog is a mystery as she's always dumping her off with the 'critter-sitter' and spends little time with her pet- she should consider getting a goldfish. The remaining cast of characters are not well fleshed out and fairly one-dimensional; perhaps Connelly felt he needed to spend the time in establishing Ballard's identity. The plot is fairly tight and things wrap up reasonably at the conclusion but the motive for the nightclub shooter was unclear to me (maybe I missed it).

In summary, this new series from Mr. Connelly has potential and I would read another to see how things develop. I hope Det. Ballard rents an apartment, finds a mentor to help her dial back her attitude a bit, spends more time with her dog, and we get some more depth to the supporting cast.
Read more
159 people found this helpful
Helpful
Report abuse

Michael P
VINE VOICE
5.0 out of 5 stars For Late Nighters, Insomniacs and Early Risers, Connelly Never Fails
Reviewed in the United States on July 18, 2017
Verified Purchase
I have been reading Harry Bosch novels for years and also enjoy the Amazon series "Bosch." "Trunk Music" was the first Connelly book I read and have not stopped reading him since. His attention to detail in investigations is authentic, superb and on the level of Ed McBain or Joseph Wambaugh. He cranks out quality writing, but bucks the current trend in churning out books, to readers dissatisfaction, by not partnering with co-writers like some bestselling authors do to meet the demands of their readers.
Connelly does his own homework and we are the benefactor.

In his latest novel "The Late Show," Connelly has once again created a memorable a character like Harry Bosch and Mickey Haller with the introduction of Renée Ballard. If you are a fan of strong, well-defined characters in the vein of Patricia Cornwell (Kay Scarpetta) or Sue Grafton (Kinsey Millhone), then Renée Ballard might have you hooked from the start.

Renée Ballard does not listen to Jazz like Bosch, she surfs and is a California Girl. She has a partner like Bosch but has to work her way up the ranks beginning at the deplorable midnight shift, hence the book's title 'The Late Show." Like Bosch, she has her character flaws, foibles and demons which makes her relatable. Connelly is best at weaving multiple cases to keep us engaged which is authentic to real life police and detective work. Their days are anything but routine.

What I enjoy best about Connelly's writing, and is consistent in "The Late Show," is the great Los Angeles geographical descriptions from the streets, freeways, Hollywood and beaches like Venice. I live in L.A. so the visuals come to life on the page. Connelly characters are rebellious and always carry the anti-authority seed of "Dirty Harry."

Ditch your cell phone. Close your office or bedroom door. The Late Show is for late nighters, insomniacs and early risers. Connelly Never Fails to keep us continuously interested in his writing. I look forward to the next one.

I hope you found this review helpful.

George P. Wood
TOP 1000 REVIEWERVINE VOICE
5.0 out of 5 stars A welcome new addition to the Bosch Universe
Reviewed in the United States on July 21, 2017
Verified Purchase
When it comes to murder mysteries, Michael Connelly is my go-to author. If he writes it, I read it. So when I received notice that he was beginning a new series, starting with The Late Show, I pre-ordered the book months in advance and read it in a day once it arrived.

The Late Show introduces LAPD Detective Renée Ballard. Her star was rising in the Robbery Homicide Division (RHD) until a conflict with a superior officer got her busted down to working the night shift — the eponymous “late show” — in Hollywood. She used to investigate cases from beginning to end. Now, she rolls up on a night crimes and starts the paperwork, turning over the entire case to the day shift.

But when two victims — one a prostitute who (barely) survives a vicious beating and the other a waitress killed in a mass shooting event — cross her path the same night, she decides it’s time to follow the cases all the way through. It’s a high stakes gamble professionally, and it exposes her to grave dangers personally, but it’s a gamble she willingly takes.

Connelly is releasing his twentieth Harry Bosch novel, Two Kinds of Truth, this October. With Harry having reached retirement age, the Bosch Universe needs a fresh face. Renée Ballard is it, and if The Late Show is any indication, her stories are going to be very, very good.
Read more
75 people found this helpful
Helpful
Report abuse
See all reviews

A Scary Man
2.0 out of 5 stars Disappointing
Reviewed in the United Kingdom on September 20, 2018
Verified Purchase
Slow and implausible, with an enormous amount of detail on police procedure which is little more than padding to disguise the simplistic plot and complete lack of character development.

Renee Ballard isn't interesting or likeable, lives a very strange lifestyle (not in the alternative sense, just in the plain makes-no-sense sense) - apparently she sleeps on the beach in a tent during the day and then works shifts during the night. She has a van - wouldn't it be safer and more comfortable to sleep in there if she can't afford a house for whatever reason? She also has a dog, which she seems to have almost zero interaction with as it's either in kennels while she's working or guarding her while she's sleeping. Poor creature. If that was an attempt to humanise Renee it didn't work.

Anyway she has three cases to juggle for some reason, and solves all of them through the stereotypical "lone wolf breaking all the rules while battling incompetent and/or prejudiced superiors" routine. The most serious is a mass shooting inside some sort of club, which she is explicitly told not to investigate but does anyway, though we end up with no real explanation beyond who the shooter was. Why add all the unnecessary padding if the story isn't even going to be properly closed off?

I've never read MC before so I assume he has written better books in the past. I'm unlikely to rush to try them.
Read more
33 people found this helpful
Report abuse

Peter Gilbert
3.0 out of 5 stars Co-writer?
Reviewed in the United Kingdom on September 4, 2017
Verified Purchase
Both my wife and myself read The Late Show as soon as it was published as we are long time followers of Michael Connelly's work. After reading it we were both rather quiet and subdued, which is unusual because we always like to chat about our latest reads. Parts of the book are clumsy and other parts just plain boring. The question we both asked was; was is the first sign of MC doing a "James Patterson" and employing a co-writer? All in all it was huge disappointment from such a great writer. Love to hear what others think.
Read more
45 people found this helpful
Report abuse

A. W. Skinner
2.0 out of 5 stars Very disappointing!
Reviewed in the United Kingdom on September 30, 2017
Verified Purchase
I am afraid Mr Connelly does not make a convincing female character out of his new heroine, Renee. For whatever reason, the plot of this one does not meet Mr Connelly's usual high standards. Some of the main character's behaviour simply did not make sense. I am sure this is just a blip in an otherwise utterly dependable writing career.
Read more
32 people found this helpful
Report abuse

Sandy
2.0 out of 5 stars I've enjoyed most of his earlier work
Reviewed in the United Kingdom on February 28, 2018
Verified Purchase
I doubt that Connelly wrote this book, if he did, he has lost his skill. Sadly both the story and the storytelling fall short of providing a satisfying read with characters that feel to be designed by a politically correct focus group. The writing is laboured and padded with redundancy. I'll not be returning to him; its a pity, I've enjoyed most of his earlier work.
Read more
29 people found this helpful
Report abuse
See all reviews
Back to top
Get to Know Us
Make Money with Us
Amazon Payment Products
Let Us Help You
EnglishChoose a language for shopping. United StatesChoose a country/region for shopping.
© 1996-2022, Amazon.com, Inc. or its affiliates