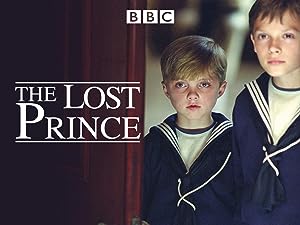 Season 1
(373)
200313+
This is the little-known story of Prince John, the youngest child of George V and Queen Mary, whose short life spanned a momentous period in history - the political build-up to the First World War. This drama tells the very human story of a unique family and an extraordinary boy.

Blue LeafReviewed in the United States on February 22, 2016
5.0 out of 5 stars
The Lost Prince Found At Last
Verified purchase
This is a great film put out by the BBC. It is a true story about the youngest member of the British Monarchy during WWI and the Russian Revolution. He was Prince Johnnie . His father was George V and his mother was Queen Mary. From an early age he was prone to epileptic fits and the royal doctors diagnosed him as being mentally challenged who should be kept away from the royal family as an embarrassment.

The truth slowly emerges, with the help of his nurse and nanny Lalla, that he may be quite intelligent in his own way, and it was her goal to prove this fact to his parents, and in particular to his mother, played marvelously by Miranda Richardson, whose inclination was to ignore him and his issues rather than find out his true potential.

This is truly a wonderfully made-for-televison movie which restores this forgotten, but wonderfully gifted child, back to his place in the history of the British Monarchy in an most entertaining and illuminating fashion.

Terry Bardy (Unsubscribe)Reviewed in the United States on February 27, 2017
5.0 out of 5 stars
This Is One Emotional Historical Movie That Is Well Worth The Price
Verified purchase
The Lost Price is a wonderful movie from Masterpiece Theater as it exams the little mentioned member of the British Royal Family, Prince John. It shows Prince John 's family members from his loving Grandparents, his brother and best friend Prince George, his caring nanny "La-La," his parents King George the V, and his well-meaning Mother Queen Mary. It's a very bitter-sweet story of how Prince John coped with epilepsy, and learning impairments while retaining his personality and just being himself. Even though his parents at first try to keep him at low key to altogether pretending he doesn't exist, he shined his own unique light. This also shows the British, Russian, and German Royal Families handling World War 1, and the eventual destruction of the Russian and German Royal Family. The sad end is also a five Kleenex rating as this is a very moving movie with good taste that Masterpiece Theater is well known for. It's a show of sweetness and strength of this Lost Prince. Bravo!
4 people found this helpful

lbrlartistReviewed in the United States on December 9, 2011
5.0 out of 5 stars
Lovely film about an almost forgotten child
Verified purchase
As an Anglophile, I've watched lots of documentaries and films on British Royal families. What comes through to me over and over again is that although the royal parents may love their royal children, showers of love and affection are simply "not done." The children are raised by nannies, governesses and other support staff. They are then shipped off to far reaches of the kingdom and slapped into various boarding schools.

The Lost Prince is about Prince Johnnie, son of George V and Mary, who has at the very least epilepsy and some learning difficulties. As was the custom of the day, such frailties were kept secret from one's subjects (his cousin Alexei Romanov's haemophilia was never public knowledge either). In Prince Johnnie's case, he was hidden away from public view and finally removed from his family entirely, presumably to maintain public trust in the strength of the dynasty.

As sad his life may appear to us 21st century types, I am left wondering if Johnnie didn't have the better deal than the rest of his siblings. He was loved and adored by his nannies. He spent his time living in a world of his own design, while maintaining a tether to his surroundings and the people in it. I look at his two most famous brothers, Edward and George VI and I have to believe Johnnie had a happier (albeit short) life.

Was his life and situation poignant? Yes, absolutely! But, in the years after Johnnie's death, would anyone have wanted to trade places with his more famous brothers, Edward and George VI? Neither had the tools or emotional confidence to face the challenges that nearly crushed them separately. Johnnie on the other hand spent his last days tilting at windmills and romping in the English countryside.

Children with disabilities have been treated so inhumanely, due in part to parental helplessness, ignorance and shame. Johnnie, however, was lucky; instead of being locked away in an asylum or lobotomized like Rosemary Kennedy, his parents simply made him disappear - into his own world.

I don't agree with their choice at all, but given that up until Princes William and Harry, the main sources of love for British princes appears to have been hired help and not from the parents, little Johnnie did okay.

The Lost Prince is a lovely movie that will touch you immensely - at least it did me.
12 people found this helpful

Stephen MattiaReviewed in the United States on June 21, 2013
4.0 out of 5 stars
Heart Breaking
Verified purchase
If you like late Victorian era history with a human touch you are going to like this one. Set in a period of time just before WWI; it's a story of an adorable child who is hid away simply because he was royalty and had an affliction. Against the backdrop of an historical time which ends in the destruction of the beautiful old order - the English royal family confronts its own crises and in many ways fails. What is ironic in the movie is the comparison it makes between the Czar of Russia , Nicholas and the way he treats his family versus the English king George V - Nicki's cousin - treatment of his family. The Czar obviously puts his family first - not hiding Alexi away because of his medical condition, the English king loves his position first and lets his own son be placed out of sight. Ironic, because one Father lost his life for love of family the other kept it by disowning his own. Much to learn about the crosses which were shouldered by the old order.
8 people found this helpful

There were times when I wanted to just shake his mother. His father was clueless and I didn't think even shaking him would have done much good. I loved Georgie, Prince John's older brother. Throughout the movie I wondered who the strange woman was who befriended Prince John, "Johnnie" and found out only by watching the extra section after the movie that she was just added for effect. It's almost as if she represents all of us, who wish we could have been there to smile, wave, and appreciate this young boy.

I love history and this movie was helpful putting some faces and situations to some names.

I found it enjoyable, and not at all depressing.
4 people found this helpful

jill bastenReviewed in the United States on March 6, 2016
5.0 out of 5 stars
Today the boy would be loved and cherished but not then
Verified purchase
A very sad but true tale of a charming little boy treated by his parents as an outcast because he had epilepsy. His life was short but before he died at 13 he was loved and cherished by his Nanny and the ordinary people around him. The play has a wonderful cast of wellknown faces and is sympathetically directed by Stephen Poliakoff. Recommended for any student of the British Royal family's far from loving behaviour to anyone who is different.
3 people found this helpful

Kindle CustomerReviewed in the United States on June 19, 2011
5.0 out of 5 stars
The Lost Prince. A fantastic dvd
Verified purchase
The Lost Prince is a wonderful DVD set. The major events of the world during the brief life of Prince John, as seen through his eyes, are well chronicled. The entire series illustrates life in Europe prior to World War I, when all the ruling families were related to one another. Especially enjoyable was the scene when Queen Alexandra mused that the war could be ended if her son, King George V, her nephew, Tsar Nicholas II, and her other nephew, Kaiser Wilhelm, (known in the family as Georgie, Nicky, and Willy) could get together as a family and talk.

The innocence of Prince John and his daydreams about his family coming to live in house are typical of any young child. The only difference is Prince John's family encompasses all the the ruling families of Europe.

As an educator of children with special needs, I know the importance of the feeling of "being just like everyone else." Prince John's being able to stand in front of his family and perform, just like his siblings, was the most poignant and touching scene of the entire series.

This is an excellent DVD for any person interested in historical drama from an extremely human and personal point of view.
2 people found this helpful

R. D. PackerReviewed in the United States on June 19, 2018
5.0 out of 5 stars
Deeply Moving
Verified purchase
This is a deeply poignant movie with superb acting by all. It is a story in history which indeed needed to be told. It’s impossible to watch this to the end without shedding a tear. Highly recommended—
See all reviews
Back to top
Get to Know Us
Make Money with Us
Amazon Payment Products
Let Us Help You
EnglishChoose a language for shopping. United StatesChoose a country/region for shopping.
© 1996-2021, Amazon.com, Inc. or its affiliates