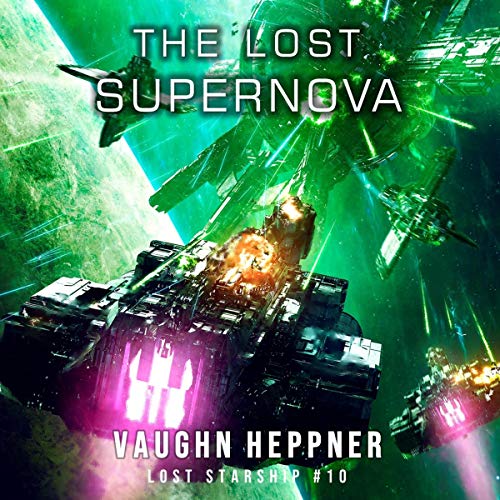 Androids used to mingle among us, pretending to be human. Then an alien puppet-master altered their programming. Unknown to us, androids began leaving human society, burning their clothes and peeling off their skin to reveal the chrome-colored bodies underneath.

They gathered in a system were a star had exploded, blowing away the atmosphere of a Jupiter-like planet. The supernova had hurled heavy metals against the remaining core. The androids are mining supermetals that can turn ordinary ship weapons and shields into invincible armaments.

The altered programming includes human genocide, which will start with a murderous attack on Earth.

Luckily, Captain Maddox finds the enemy system. But during a space battle, something happens to hurl Victory thousands of light-years away into the Scutum-Centaurus Spiral Arm. The crippled starship will take years to reach home again. Long before that, Earth will be a radioactive ruin.

Now begins a desperate journey in hostile space that will stretch everyone as Maddox strains to reach the Lord High Admiral in time with knowledge about the coming android attack.

The Lost Supernova is the tenth book in the Lost Starship Series.

4.6 out of 5 stars
4.6 out of 5
642 global ratings
How are ratings calculated?
To calculate the overall star rating and percentage breakdown by star, we don’t use a simple average. Instead, our system considers things like how recent a review is and if the reviewer bought the item on Amazon. It also analyzes reviews to verify trustworthiness.
Top reviews

Robert Shuler
3.0 out of 5 stars no progress in most situations
Reviewed in the United States on May 6, 2019
Verified Purchase
At ten books, I'm giving up on this series. There was no progress in the personal stories of a single character. A new trumped up secondary menace was destroyed at high cost. But the motivators behind it all go on. It is now a soap opera rather than a series of novels. No conclusion at all. All of the tricks were things they'd done before, like hyperspatial tubes. I gave it a star for well paced writing, that is all. The new character Stephanie Meyers has no coherent motivation, or none consistent with the rest of the series. It is unlikely the Builder, if she wakes him up, will listen to anything she says, even if she had motivation to say it. Since when did a Builder listen to anyone? Since when did a Builder try to destroy any species? They didn't even destroy the Swarm. It would have been much more interesting to explore the sexual side of Meyers nature. Heppner carelessly shoots that with a tranq dart.
Read more
13 people found this helpful
Helpful
Report abuse

Mike NemethTop Contributor: Photography
5.0 out of 5 stars Deadly beautiful and full of surprises
Reviewed in the United States on September 3, 2021
Verified Purchase
Early on in "The Lost Supernova," the 10th installment of the Lost Starship series, author Vaughn Heppner tosses Captain Maddox in a precarious position. He's gone rogue, rebelling against his once-beloved Star Watch to seek personal glory and power. Or at least that's what his enemies want the authorities to believe. Turns out there's a Methuselah woman, a beautiful yet deadly conspirator who appears more deadly and dangerous than her long-living and super-intelligent compatriots Strand and Professor Ludendorff. However, Maddox being Maddox means he discerns the threat and seeks to limit the damage. His crew, the little Adok artificial intelligence Galyan, Keith the crazy pilot, Riker the grizzled sidekick, Meta his wife and Valerie his Star Watch compatriot, provide his support and the reason for his purported luck and continued success. The beginning just sets the scene for battles with androids, discovery of hidden bases and continued difficulties reining in Ludendorff. The threats remain huge, and Earth is threatened. Despite near constant setbacks, Maddox and the alien starship Victory must find ways to overcome challenges and nullify the bad actors. Supernova is classic Heppner. It has all the elements of his swashbuckling style. But he adds some pretty thought-provoking concepts. And the bad guys have multi-layered strategies to undermine Maddox and company. Heppner adds enough twists and turns to keep his fans happy. I'm on a roll. After ignoring Maddox for what must have been several years, I'm back and determined to finish the remaining books by one of my favorite, and very prolific, authors.
Read more
One person found this helpful
Helpful
Report abuse

Colum Dillon
5.0 out of 5 stars Lost ship just gets better
Reviewed in the United States on May 10, 2019
Verified Purchase
The last ship series just gets better and better with every book. Find yourself unable to put the book down whether it’s a kindle or paperback you will just be engrossed with the story. My only complaint is that you find the number of chapters seem to step back to explain the reason for something happening. It’s not needed in the story if you’re reading closely and the first time then you don’t need to repeat you three or four times afterwards. But that is my only complaint so kick off your shoes find a comfortable seat grab a coffee or a beer And start reading
Read more
7 people found this helpful
Helpful
Report abuse

Kindle Customer
1.0 out of 5 stars I want to love this series, but it's impossible.
Reviewed in the United States on March 5, 2020
Verified Purchase
This series has so much of what I love. Aliens, space combat, strange technologies, etc. But, a main character that is so poorly written it is unbelievable.

Maddox, a great leader and close to genius by human standards. Well, so the author says, except the character never shows any good leadership qualities or makes any intelligent decisions. He is instead rash, rude, short sighted, and just bumbles about almost randomly. He'll interrogate or question other characters, but always interrupt before they've spoken a full sentence.

In this book he is now suddenly a good old fashioned Christian, a point the author feels is necessary to drive home repeatedly over a couple chapters. The relevance to the story? Zero. I wish there at least had been a point of irony or something, anything, when the main character through his rash actions and lack of thinking causes not only the death of the entire family and all friends of another character, but also sets into motion a genocide of said characters race, and the main character just sends the other character off with a "Walk with God".

I'm sorry, it's the end of the line for me and this series.
Read more
2 people found this helpful
Helpful
Report abuse

JCB
4.0 out of 5 stars Good story, needs editing
Reviewed in the United States on April 30, 2019
Verified Purchase
The story is compelling and moves along at a fast pace. Familiar characters and doomsday heroism as we have come to expect from the series. Mr. Heppner, please reread your book, there are passages whose sentence structure need work and sentences missing words which would help make sense of Your written passages-for example go through Chap. 91, there are some sentences missing connecting words to make the passages coherent. Overall, really liked the book.
Read more
3 people found this helpful
Helpful
Report abuse

StudSupreme
5.0 out of 5 stars Series continues to build momentum
Reviewed in the United States on April 28, 2019
Verified Purchase
Each book in this series has been better than the last.
The author's sparse style is rich in meaning, much like Larry Niven. Every page is action packed and intriguing, as well as a complete surprise despite my best attempts at sleuthing.
This is the best Sci Fi series out there.
Very much looking forward to #11.
Read more
4 people found this helpful
Helpful
Report abuse

Kindle Customer
4.0 out of 5 stars Military space drama
Reviewed in the United States on August 19, 2021
Verified Purchase
When the humans killed Yon-Toth they were unaware his final actions were to plot their demise. Victory and her crew find themselves chasing all over the galaxy while trying to stop the various plots set in motion. The androids have united to destroy all humanity before they leave to find a new home and Star Watch Fleet is almost destroyed in the conflict. That is just one of the threats they face.
Read more
Helpful
Report abuse

Stuart Riley
5.0 out of 5 stars This tale is a continuation of past endeavors of science fiction
Reviewed in the United States on January 6, 2020
Verified Purchase
Maddox met his machine match and used his superior logic to hinder their success with reducing the common wealth to ashes. This story relies on past book episodes but does not leave the reader to guess what will or would happen. There is plenty of battles, machines against men, and age old deception patterns throughout the book, BUT it’s not predictable.
Read more
Helpful
Report abuse
See all reviews

Jimbo Gilmour
5.0 out of 5 stars The great story continues to try and stop the invasion of Earth
Reviewed in the United Kingdom on June 4, 2019
Verified Purchase
Well due to an accident the Victory is now ten thousand light years from home, but there are still to find a way home

Double cross and shrubbery are the way of life with Galayn possibly being been destroyed. The odds against getting back
are of good, but Maddox will save the day . Well read the book and see if he does!!
Read more
Report abuse

Aescalapius
4.0 out of 5 stars An Excellent Read
Reviewed in the United Kingdom on May 8, 2019
Verified Purchase
A conveyer belt of non-stop action with an equal measure of intrigue.
I would like to see the "Victory" having better offensive weaponry that have a faster warm-up time & better defensive capabilities e.g. a better shield & armour; at least as good as those of the Juggernauts e.g. Iridium-z now that Madox has found the supermetals planet.
Read more
Report abuse

ET Mac
5.0 out of 5 stars Always a good read
Reviewed in the United Kingdom on May 13, 2019
Verified Purchase
Enjoyed the latest instalment in the Lost Starship series. Only problem is the book was a bit short but otherwise a good read.
Read more
Report abuse

Joe
4.0 out of 5 stars Good read
Reviewed in the United Kingdom on July 7, 2019
Verified Purchase
I have read all the books in this series and they are a very good read. Only negative is the lost supernova book seems short than the others. Hope this storyline continues.
Read more
Report abuse

Ahriman
4.0 out of 5 stars Great
Reviewed in the United Kingdom on December 8, 2019
Verified Purchase
This is truly a great epic saga. The same old characters and as always, a great story.
Read more
Report abuse
See all reviews
Back to top
Get to Know Us
Make Money with Us
Amazon Payment Products
Let Us Help You
EnglishChoose a language for shopping. United StatesChoose a country/region for shopping.
© 1996-2022, Amazon.com, Inc. or its affiliates