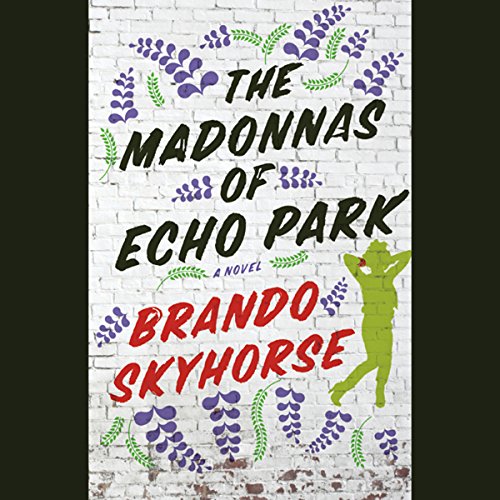 The Madonnas of Echo Park

"We slipped into this country like thieves, onto the land that once was ours."

With these words, spoken by an illegal Mexican day laborer, The Madonnas of Echo Park takes us into the unseen world of Los Angeles, following the men and women who cook the meals, clean the homes, and struggle to lose their ethnic identity in the pursuit of the American dream.

When a dozen or so girls and mothers gather on an Echo Park street corner to act out a scene from a Madonna music video, they find themselves caught in the crossfire of a drive-by shooting. In the aftermath, Aurora Esperanza grows distant from her mother, Felicia, who as a housekeeper in the Hollywood Hills establishes a unique relationship with a detached housewife.

The Esperanzas’ shifting lives connect with those of various members of their neighborhood. A day laborer trolls the streets for work with men half his age and witnesses a murder that pits his morality against his illegal status; a religious hypocrite gets her comeuppance when she meets the Virgin Mary at a bus stop on Sunset Boulevard; a typical bus route turns violent when cultures and egos collide in the night, with devastating results; and Aurora goes on a journey through her gentrified childhood neighborhood in a quest to discover her own history and her place in the land that all Mexican Americans dream of, "the land that belongs to us again."

Like the Academy Award–winning film Crash, The Madonnas of Echo Park follows the intersections of its characters and cultures in Los Angeles. In the footsteps of Junot Díaz and Sherman Alexie, Brando Skyhorse in his debut novel gives voice to one neighborhood in Los Angeles with an astonishing— and unforgettable—lyrical power.

Your audiobook is waiting!
Learn more about Membership
List Price: $27.93
You Save: $3.49 (12%)
By completing your purchase, you agree to Audible’s Conditions Of Use
Sold and delivered by Audible, an Amazon company

Max
1.0 out of 5 stars worst book I read this year
Reviewed in the United States on October 27, 2018
Verified Purchase
This book is a waste of good paper. It is overrated, the characters are flat, it tries to be edgy but it comes across as forced, the writing style reeks of the MFA writers workshop. The writer seems to wrap up each chapter with a calamity; his characters get deported, commit suicide, are murdered, become homeless ad nauseum...and because the characters are poorly developed, you really don't care, so it is all an exercise in tedious banality. As a Mexican-American, this writer seems like he is trying to hard to sound "Chicano", it is like he is posing or something. Put it this way, if "Brando Skyhorse" turned out to be a pseudonym for a middle aged white lady from Peoria, I won't be surprised.
Read more
2 people found this helpful
Helpful
Report abuse

Francesca Rosario
5.0 out of 5 stars Updike-like
Reviewed in the United States on July 30, 2014
Verified Purchase
I have officially read a rejuvenated John Updike in The Madonnas of Echo Park. I’ve long followed such fluency throughout my life and career, and now it protrudes its head again in an ethnically-bound novel. Though the book is divided in eight compartments (plus the pulse of the story which is “Author’s Note")—or maybe they’re apartments where the windows are jacaranda blossom-colored through the eyes of the deeply smitten reader—the links between them are expressively cool, subtle. The language is erudite, eclectic prose; mainstream to those who passionately crave such poetry.

There is milieu in Echo Park, California. Its portrayed residents—a homely housekeeper, her outgoing daughter, Aurora, a father struggling to make ends meet while avoiding deportation, and other teenaged girls who seem to mark places up the range of Americanization—are cornered in familiar situations that put a strain on a standard culture. One can ticket a drive-by shooting as far worse than choosing who to kick out from a bus to avoid mob upheaval. But that choice still depends on majority, not on right and wrong. Message to the human condition is flung when the bus driver gets off and meets a hypersensitive allegiance to race anyway. This is existentialism in Echo Park, one that cannot be escaped even through stained glass.

I have my own ordeal in labeling characters; I do not. The author here is more of a realist and do. It is perhaps pragmatic for him to describe because this is where he grew up and how. Deal with it and confront the imperfection with the musical flow of his narrative. Yes, and that Madonna reference, that could only be hoisted from that once ever-changing image of her, from what is stagnant in Echo Park—the struggles and pains of a variegated group still trying to avoid the label “displaced.”

I’ve read a lot of Updike. It’s good to see him revived and take up the penname of Brando Skyhorse.

(Yet, Mr. Skyhorse, you don't have to "slip into" this remarkable new voice for it is your very own.)
Read more
Helpful
Report abuse

Larry Hoffer
4.0 out of 5 stars A compelling collection of stories that moved and intrigued me...
Reviewed in the United States on August 10, 2012
Verified Purchase
Echo Park, the Los Angeles neighborhood down the hill from Chavez Ravine, is the setting for Brando Skyhorse's interconnected story collection, The Madonnas of Echo Park. (I think Brando Skyhorse may be one of the coolest names I've ever heard for an author.)

The characters in Skyhorse's stories are Mexican-Americans of varying ages who are trying to fit in with or rebel against their culture and their neighborhood. Many of the characters are the types of people we pass by every day--cleaning women, bus drivers, day laborers, ex-convicts and teenagers--but Skyhorse brings each to life by wrapping us up in their stories. There's Felicia, who finds herself cleaning house for a family more damaged than she bargained for; Angie, who is reminiscing about her life-changing, fractious relationship with her teenage best friend; Efren, a bus driver who has always prided himself on his staunch devotion to rules and regulations, until one night; Hector, a migrant worker who is forced into covering up a murder; and many others.

Some of the stories in this collection truly moved me, some intrigued me and all but one compelled me to keep reading. Skyhorse created some complicated, multi-layered characters; even when they fall closer to stereotypes, I still found myself invested in what was happening to them. I never felt as if the way he connected the stories was too forced; at times, when I recognized the connections I was even a bit surprised (and even awed, once or twice). I look forward to seeing what comes next in his career, and I definitely recommend this book if you enjoy short stories.
Read more
One person found this helpful
Helpful
Report abuse

Patricia Loftfjeld
5.0 out of 5 stars a lovely novel-in-stories about intersecting generations of Mexicans and Mexican Americans
Reviewed in the United States on June 23, 2011
Verified Purchase
Picked up this book after it won the PEN/Hemingway Award, since I've liked other P/H award winners in the past, and I was not disappointed. Skyhorse is a lush, unapologetically humanistic writer, and the book reads like a cross between a love song to and a eulogy for a community knotted together by love, tragedy, struggle, racism, class conflict, dreams, and circumstance.

MADONNAS OF ECHO PARK is rather OLIVE KITTERIDGE meets UNACCUSTOMED EARTH in its attention to interconnected lives and a specific immigrant/American community. I've realized how much I like the new genre emerging in books like MADONNAS OF ECHO PARK, OLIVE KITTERIDGE, and LET THE GREAT WORLD SPIN--novels that grow out of (thoroughly) linked independent characters, whose lives coalesce and create a miniature world in which the setting and local culture is almost a character itself. It allows all the rich possibilities of world-building a novel does, but more freedom and natural possibility for the plot. Like I felt with those other books, one story in MADONNAS OF ECHO PARK resonated with me especially, because of my personal experiences. I look forward to recommending the book to others and seeing which particular story resonates for them.
Read more
Helpful
Report abuse
See all reviews

lily
4.0 out of 5 stars Stay with it ....
Reviewed in the United Kingdom on September 23, 2016
Verified Purchase
Took a bit of getting into as there are different stories that eventually all tie in together . It is a quick insight into how the Mexican people were treated in LA, many if whom lived there before the Mexican /American war.
Read more
One person found this helpful
Report abuse
See all reviews