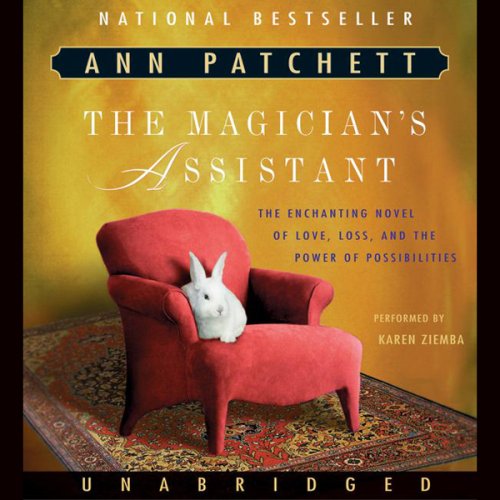 When a gay Los Angeles magician named Parsifal dies suddenly, he leaves behind his heartbroken assistant, Sabine, and a secret past that leads her to Nebraska and a father she never knew he had.

Special invitation from Audible!
Learn more about Membership
List Price: $30.79
You Save: $1.80 (6%)
By completing your purchase, you agree to Audible’s Conditions Of Use
Sold and delivered by Audible, an Amazon company
Share

4.1 out of 5 stars
4.1 out of 5
1,623 global ratings
How are ratings calculated?
To calculate the overall star rating and percentage breakdown by star, we don’t use a simple average. Instead, our system considers things like how recent a review is and if the reviewer bought the item on Amazon. It also analyzes reviews to verify trustworthiness.
Top reviews

Ellen Green Andrews
1.0 out of 5 stars The plot thickens....sort of like a thin white sauce.
Reviewed in the United States on October 30, 2019
Verified Purchase
This is my first Ann Patchett novel and I'd heard good things about this writer, so I was very excited to read this. I should have saved my excitement for something more worthy. The plot is plodding and about as deep as a wading pool. Just when you think it will get better it peters out. The characters are thinly developed and if the author meant to leave things up to the readers imagination or was writing a fill in the blanks book, it's well done, as you are left having to supply character depth with your imagination. I kept reading to the end hoping the plot and characters would find their moment of glory, but after the magic trick at the wedding (really, a magic trick at the wedding, how cheesy, why would you do that and steal the brides thunder?) and turning to the next page (electronically) I realized that was the end of the book. Talk about feeling cheated. I never need the author to spell out every little detail and nuance of a book, but I do need to see closure. This book lacks that satisfying closure. I'm not even asking for a HAE ending, but to abruptly leave your reader scratching their heads saying. "And....?" If this book wasn't past it's return by date I would do so. I will probably leave this writer to those that adore the unfinished novel idea.
Read more
30 people found this helpful
Helpful
Report abuse

E. Piper
VINE VOICE
5.0 out of 5 stars BEAUTIFULLY TOLD SURREAL STORY
Reviewed in the United States on November 22, 2017
Verified Purchase
This was a beautifully crafted surreal story about a woman, Sabine, after the death of her husband. Her grief was painfully realistic (I am also a widow) with so many unusual twists and turns that I couldn't put the book down: A gay husband whom she never had an intimate relationship with; her husband's lover who has predeceased him but cared so much for Sabine that he bought a cemetery plot for her so that she could be buried with them; a completely dysfunctional family from Nebraska that Sabine knew nothing about and, of course, Sabine's vivid dreams that felt like messages "from the other side." Having lived in Los Angeles, I even loved the references to beloved places like Cantor's Deli. All of these disparate elements were beautifully woven together to make a story that has endeared me to this author. This is the first of Ann Patchett's books that I have read but will now buy the rest of her works.

This is a wonderful book by a very talented author that I am happy to recommend.
Read more
45 people found this helpful
Helpful
Report abuse

Juanita Bradstreet
3.0 out of 5 stars Not my type of reading.
Reviewed in the United States on June 14, 2019
Verified Purchase
Review: The Magician’s Assistant by Ann Patchett. 3 Stars 05/06/2019

This was a very original story by Ann Patchett. The writing is flawless and full of ironic thinking for the characters. The language and descriptions throughout the story kept me fascinated. Pachett manages two sub-plots weaving within the story. Placing a few random events seem magical but helped enhance the story. The characters were creative and well developed.

The story begins with the death of the magician and leaves Sabine a widow. Sabine’s enclosed with grief that she spends most of her time in bed until she got a call from the magician’s lawyer with some surprising strange news. Sometime later in the story the readers find out who Sabine’s husband Parsifal really was. They were only married for a year and she was Parsifal’s assistant. She still married him even as she new he had another love. Even though she knew he was gay and would never love her, she still devoted her life and love to him anyway.

During Sabine’s grief for Parsifal she was confused when she heard her husband had kept the truth from her about where he came from and his true identity.
Read more
8 people found this helpful
Helpful
Report abuse

Joseph Sciuto
5.0 out of 5 stars WONDERFUL!!!!!
Reviewed in the United States on July 24, 2021
Verified Purchase
A book so beautifully written, powered and energized by a fascinating group of characters, that I truly wish it never ended, and in a sense it didn't because after reading the final lines of the book I was left thinking about the future of all the characters, even the dead ones. In this sense it was very Hemingwayesque.

Sabine, the main character, is working as a waitress in a comedy club in Los Angeles. The magician onstage picks her to come onto the stage and assist him in an act of magic. Sabine is gorgeous and young, and at first she is too shy to go up on stage but when she finally relents she falls in love with the magician whose stage name is Parsiafal. He is handsome, caring, and sensitive and he is also gay but that does not stop them from staying and living together until the day he dies. His lover, Phan, lives with them and buys them a huge house, which they all live happily in. When Phan dies of AIDS, Parsiafal marries Sabine because he also has AIDS and wants to make sure that all that he leaves her when he dies is not contested by anyone. They are married for about a year and a half when Parsisfal dies, not from AIDS, but from a brain aneurism.

Suddenly, left alone in this big house with all these wonderful memories she finds it impossible not to live without Parsiafal. She can't let go, and then it occurs to her that she knows very little of Parsiafal's younger life... just tiny bits and pieces that she quickly finds out do not add up.

His so called family that he told her all died in a car accident, are mostly alive and living in Nebraska. His mother and younger sister come to visit Los Angeles when they find out he has passed away and he has left them a sizable chunk of money. Sabine meets them, and gets along so well with them that she visits them in Nebraska and it is here that she discovers the tragic history of her husband's youth, as told by his mother, younger sister, and his twin sister Kitty.

Parsiafal is once again in her life through his mother and sisters and her love for him only grows, and the family's love for him has always been there, even though they have never seen him since he left at eighteen. He, until the end of his life, has send his mother money but never have they communicated.

Yes, this beautiful and amazing book tells you that you can go back to your younger days, that love is eternal even at a distance, and that in the face of a twin sister that looks very much like the deceased, you can once again find the love of your life for a second time.

I Loved this book and I highly, highly recommend it.
Read more
One person found this helpful
Helpful
Report abuse
See all reviews

Mrs Margaret Ramsay
5.0 out of 5 stars One of Ann Pratchett's best.
Reviewed in the United Kingdom on February 8, 2021
Verified Purchase
I absolutely love Ann Pratchett books. A pity I couldn't get this title in England anywhere, and had to import from USA. The story in this one gets better and has more surprises as it goes on. What people are thinking beneath the actual events is wonderful. Just how people do behave.
Read more
Report abuse

sfd
5.0 out of 5 stars a magical read!
Reviewed in Canada on December 22, 2020
Verified Purchase
Ann Pachett is a wonderful author and this novel confirms her talent.
Completely enjoyable.

goodpepper
5.0 out of 5 stars Wonderful storyteller. I love all of the characters she creates and this book is pure magic.
Reviewed in Canada on September 9, 2016
Verified Purchase
I like be all of the characters she creates. I waited patiently for Phan returning. Another thing I love is that she doesn't wrap up the story but gives you the chance to think about possible endings with enough to think about throughout to guide you
Read more
Report abuse

Tia Gorman
4.0 out of 5 stars Love this author
Reviewed in Canada on August 29, 2019
Verified Purchase
Took a little to get into this one but once I did I finished it in a day!
Read more
Report abuse

Baa
3.0 out of 5 stars Very well written but it became boring
Reviewed in France on November 1, 2020
Verified Purchase
If I hadn't paid for it, I might have stopped reading it about a third of the way through: it's extremely well written but after a while the author doesn't seem to have much more to say and it becomes boring. I much preferred her novel Bel Canto, where she keeps the reader's interest right up to the last pages, even if (as in The Magician's Assistant) the ending is disappointingly implausible.
Read more
Report abuse
See all reviews
Back to top
Get to Know Us
Make Money with Us
Amazon Payment Products
Let Us Help You
EnglishChoose a language for shopping. United StatesChoose a country/region for shopping.
© 1996-2022, Amazon.com, Inc. or its affiliates