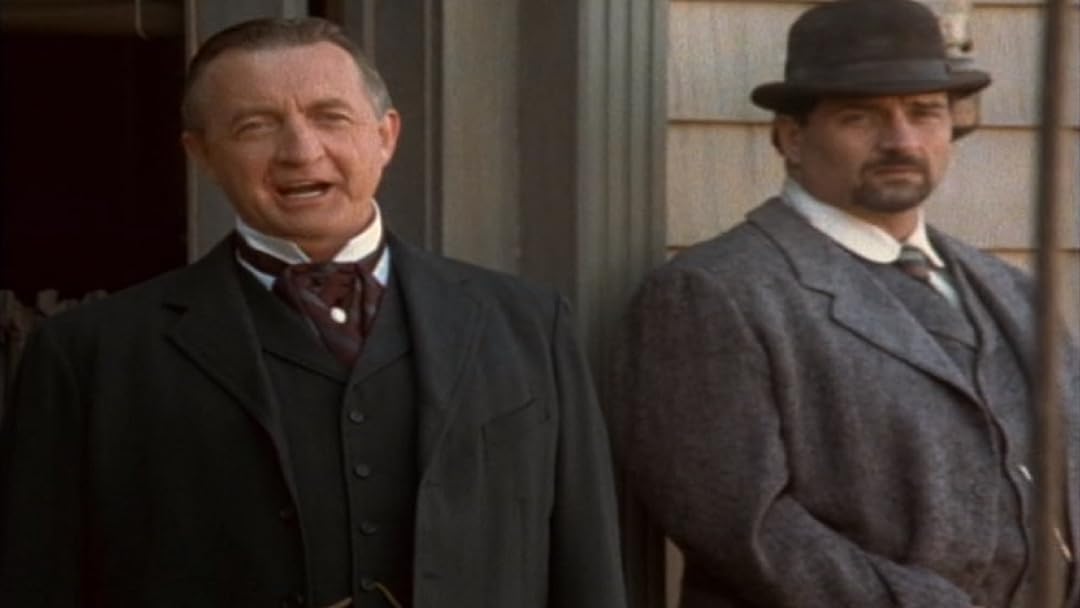 (4,452)199813+
It was a classic motion picture. Now the adventure of the big-screen Old West comes to television, in the tale of seven men committed to one cause - justice.

matt hangasReviewed in the United States on January 24, 2017
5.0 out of 5 stars
One of the most iconic Westerns ever committed to celluloid...truly magnificent...
Verified purchase
As iconic of Western film as ever made...top rate all-star cast, fabulous score (old farts will recognize the title track as the Marlboro Man music) by Elmer Bernstein...Yul Brynner, Steve McQueen, James Coburn, Robert Vaughn, Charles Bronson...a rollicking good time...not-so good guys kick really bad guys tails...plus, as an added bonus, this is based on the great Akira Kurosawa's film, "The Seven Samurai"...Kurosawa claimed his samurai films were actually Westerns...critics in Japan disagreed, stating that Samurai predated the American cowboy by several centuries..."Yes, but Americans have been making cowboy movies much longer than Japan has been making samurai movies, therefore these are my interpretation of western cowboy movies"...
56 people found this helpful

robin friedmanReviewed in the United States on May 6, 2020
5.0 out of 5 stars
Watching The Magnificent Seven During The Pandemic
Verified purchase
I have been watching some of the classic Western movies during the pandemic, including this 1960 film, "The Magnificent Seven" directed by John Sturges. The movie adopts an earlier 1954 film, "Seven Samurai" to a Western setting. With seven gunmen, called the "Magnificent Seven", among its large cast, the film includes many famous and soon to be famous actors, including Steve McQueen, Charles Bronson, Horst Bucholz among the gunmen and Eli Wallach as Calvera, the villain of the piece and the leader of a gang of outlaws. The star of the show, however, is Yul Brynner, who plays Chris, a tough gunslinger and the leader of the impromptu group of seven.

The movie is set and filmed and Mexico and tells about a large gang of bandits led by Calvera that bullies and intimidates a small village of farmers. Ultimately the farmers have enough of it. They hire Chris to help fight off the bandits. Chris hires six confreres, to help with this dangerous task. Each of the gunfighters has his own character and motivation, and they are all differentiated beautifully in the film. The gunfighters help prepare the villagers to assist them in fighting off the bandits. After many twists and turns and a lot of violence the village is left in peace with Chris observing at the end of the gunfighters, "we always lose".

As with many Westerns, "The Magnificent Seven" contrasts the life of settlement with the free-wheeling, independent life of gunfighters and loners. The gunfighters are shown as a dwindling group before they are gathered together by Chris to help the town. The town, settlement, and community win out with a fond look at the early wildness that helped make it possible.

The story is well-told, absorbing and easy to follow. The movie has a visceral appeal. Among the strongest features of the movie is the musical score by Elmer Bernstein. It is radiant and inspiring throughout, with its famous main theme, and almost defines the West in music.

In addition to its theme of settlement and community, the film speaks of the need to stand up for oneself and one's people in the face of bullying and violence.

This film is widely and deservedly recognized as among the best in the Western genre, and it has been listed by the National Film Registry of the Library of Congress as "culturally, historically, or aesthetically significant". I was glad to have the opportunity to see the film during these difficult times.

CC38Reviewed in the United States on September 19, 2017
5.0 out of 5 stars
A Gunslinger Wanders and is Lost
Verified purchase
This movie is a gem among westerns. Great character motivations, great characters, and a satisfying conclusion. This film has many iconic actors playing memorable gunslingers that you will love to watch, and yet a realistic message about the nature of a gunslinger's life and motivations. It's true, this movie was made before cgi so you won't see blood spurting out of people's chests when shot; indeed, you might not even see a hole. However, if you just want realistic gun violence and don't care about the plot, then go watch the remake. This is a vastly superior film and I doubt anyone who's reading this review would need to be told the remake isn't worth 2¢.
32 people found this helpful

Delta D.Reviewed in the United States on May 21, 2019
5.0 out of 5 stars
Still magnificent, even watching it shortly after The Seven Samurai
Verified purchase
My expectation was that it would pale in comparison with its all-time masterpiece progenitor. However, whilst there's no doubt as to which is the better film, The Magnificent Seven still comes across as magnificent.

Seeing them close together was a very worthwhile exercise: the features common to the two - right down to the conclusion that the farmers won and their defenders lost, as they always do - are very apparent.

Both films have superb cinematography and the camera (quite rightly) does a great deal of the talking. Whilst I had always admired this film, when I loaded the DVD so soon after watching The Seven Samurai, I did not expect to be handing out 5*, but no hesitation in doing so at the end.
14 people found this helpful

Amazon CustomerReviewed in the United States on June 20, 2017
4.0 out of 5 stars
Good for a Western, even if you are not into the genre.
Verified purchase
I am not into Westerns but my mom always praised this movie, so I decided to watch. It's good, especially for the genre. To tell you the truth, the main pleasure is to simply watch the key actors - they are a bunch of such interesting faces and personalities! Charles Branson chopping wood - yes, I think so. :-) Yul with his low mainly voice - of course! James Coburn just walking or standing - he is magnetic without even saying a word! Eli Wallach was so believable as a Mexican bandit - wow! Vladimir Sokoloff as a Mexican old man - did not recognize him! The story is rather long and predictable but it's nice that it attempted to dig a bit deeper and show "the other side" of so-called romantic loner's life.
22 people found this helpful

joel wingReviewed in the United States on December 28, 2020
4.0 out of 5 stars
Classic American adaptation of Kurosawa's 7 Samurai with its own twists & additions
Verified purchase
The Magnificent Seven was Hollywood’s version of Akira Kurosawa’s Seven Samurai turned into a Western. The general plot was the same a little village asks a gunfighter to help them against bandits. He goes and forms a team of 6 others and they go to defend the town against seemingly unsurmountable odds. It did add its own little twists that made it a classic.

The movie isn’t completely unoriginal. It adds some new and interesting elements. For instance Yul Brynner as Chris Adams the head of the heroes is an iconoclast. Two men want their friend buried but the funeral home refuses to do so because the deceased was an Indian and now the cemetery is for whites only. The head of the funeral home adds that this only started after the town became “civilized” meaning after more people settled there they brought their American racism with them. Adams along with Steven McQueen as Vin Tanner decide they’ll take the body to the cemetery and stand up to the armed local racists. That kind of character is what will lead Adams to help out the town which is made up of poor Mexicans. The movie also spent a lot of time talking about the dignity of the townspeople and change dup the confrontation with the bandits. Charles Bronson as Bernardo for instance talks to kids in the town about how they should respect their parents and not glorify the gun fighters.

Overall this is a classic Western. With a great story and cast of characters even if it is derivative of Kurosawa’s masterpiece.
C
4 people found this helpful

Jake UnderwoodReviewed in the United States on March 11, 2019
4.0 out of 5 stars
Watch Kurosawa's Seven Samurai instead.
Verified purchase
Comparing this directly to Kurosawa's Seven Samurai doesn't feel fair being that Seven Samurai is such a classic. But when it's a literal remake there's no choice. Everything that's wrong about The Magnificent Seven is done right in Seven Samurai. The only thing Magnificent Seven has going for it in comparison is that it's shorter and it's in English. Yul Brynner is miscast. He and Steve McQueen should really have switched roles. Also Charles Bronson played the character that in Seven Samurai was neither brave nor badass. When he's being recruited he says he runs away from a fight before it can ever begin. Bronson on the other hand is a big badass guy willing to fight. Magnificent Seven as it's own film is a very good western but when compared to its predecessor is can hardly live up.
5 people found this helpful

Looking CloserReviewed in the United States on August 31, 2018
4.0 out of 5 stars
Best Western
Verified purchase
In this remake of the Kurosawa classic Seven Samurai, some changes in plot do not meet the dramatic heights of the original. Some of the energy is sucked out of the gunslingers'/samurais' personal stories by plot changes. Don't want to detract from this version, since it is a great western. Compare these Hollywood westerns with the Italian films, such as Leone's For a Fistful of Dollars (which is a remake of Kurosawa's Yojimbo) and the difference is glaring. These Hollywood tough guys are pretty clean cut, compared to Leone's and Kurosawa's. I believe I've heard that the mayor of the town where this film was shot had all the extra's wearing very clean wardrobes (you can see how white the clothes are for farmers) to maintain their dignity. Doesn't make for realistic portrayals of these characters, but who needs realism!
9 people found this helpful
See all reviews
Back to top
Get to Know Us
Make Money with Us
Amazon Payment Products
Let Us Help You
EnglishChoose a language for shopping. United StatesChoose a country/region for shopping.
© 1996-2021, Amazon.com, Inc. or its affiliates