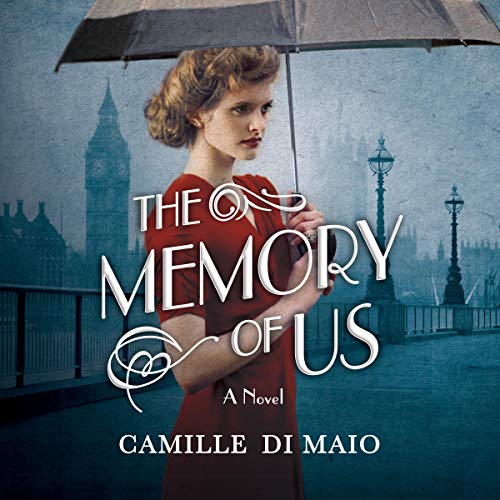 The Memory of Us: A Novel

Julianne Westcott was living the kind of life that other Protestant girls in prewar Liverpool could only dream about: old money, silk ball gowns, and prominent young men lining up to escort her. But when she learns of a blind-and-deaf brother, institutionalized since birth, the illusion of her perfect life and family shatters around her.

While visiting her brother in secret, Julianne meets and befriends Kyle McCarthy, an Irish Catholic groundskeeper studying to become a priest. Caught between her family's expectations, Kyle's devotion to the Church, and the intense new feelings that the forbidden courtship has awakened in her, Julianne must make a choice: uphold the life she's always known or follow the difficult path toward love.

But as war ripples through the world and the Blitz decimates England, a tragic accident forces Julianne to leave everything behind and forge a new life built on lies she's told to protect the ones she loves. Now, after 20 years of hiding from her past, the truth finds her - will she be brave enough to face it?

Lydia McQueen
5.0 out of 5 stars This story had me from the very beginning.
Reviewed in the United States 🇺🇸 on December 8, 2022
Verified Purchase
I am at awe of how the love came full circle. Although the story tugs at your heart it was a very nice storyline. I will be reading more from Camille. A job well done ma'am.
Read more
Helpful
Report abuse

K.L.Romo
5.0 out of 5 stars Historical Love Story
Reviewed in the United States 🇺🇸 on July 21, 2016
Verified Purchase
In her novel The Memory of Us, Camille Di Maio carries us away in the love of a lifetime, forbidden by circumstance and overwhelming obstacles.

Julianne Westcott’s life is perfect. The daughter of an English shipping magnate and socialite mother, she has everything she needs and wants. But when she discovers a twin brother, Charles, who was institutionalized at birth – blind, deaf, and mentally challenged – she realizes her life is much more complicated than she knew.

Kyle McCarthy is a landscaper’s son, living within very modest means. Julianne first meets him during a visit with her brother. While taking a break from his landscaping duties, Kyle introduces Charles to the beauty of plants, using only touch and smell. Her heart is taken with Kyle’s loving, gentle soul. But she soon learns that his heart has already been promised to another – Kyle is studying to be a priest.

Julianne’s best friend Lucille convinces her that it would be a sin to seduce a boy bound to God. But even though she tries her best to forget him, Kyle never leaves her thoughts. By chance, they see each other numerous times over the next year, and each time, Julianne feels her attachment to him growing stronger. He is handsome, funny, and kind. All the things a priest should be. But all the things a husband should be as well.

Even if Kyle weren’t promised to the Church, his situation in life is far beneath the approval of her parents. They would never accept her marriage to a boy without station. Julianne would surely have to choose between him and the life she’s always known.

As time passes, Julianne and Kyle battle the devastation that World War II brings to England, coping with the love and loss each struggles to understand and accept.

"Misery loves company, they say, and if the war had brought about misery, it had also created a company of friendships that were forged through common suffering.

It was bewildering to see the everyday aspects of life go on amidst such a ravaged landscape….Perhaps the most unnerving sights were the few children that remained in the city, prancing among this new concrete playground and making toys out of the scraps of someone’s former life."

In The Memory of Us, Di Maio surprised me with twists and turns. Just as I was expecting the plot to take one path, it would turn toward another. The first person narrative brings the reader into the brain of Julianne Westcott, following the longing of her love-torn heart as she tries to deal with her passion for a man she can’t have.

As I read, I was filled with the strong emotion of my past, as well as Julianne’s. I suffered the same struggle as a young woman – falling in love with a man whom the world didn’t see as a perfect match, but loving him none-the-less. The conflict in the novel makes the reader consider the question: How much would you give up for the love of your life? And how would you deal with the consequences?

"The people I’d loved, the people I’d left, their voices came back to me in a rising tide until, overwhelmed, I crumbled down onto the floor and wept with abandon. The tears burned my skin and I made no attempt to wipe them away. I was supposed to suffer – my eternal punishment – because of what I’d done."

For a poignant look into the hearts of forbidden lovers who must question destiny to survive, The Memory of Us will wrap itself around your heart until you cry for what was never had, what was had and lost, and what was never meant to be.
Read more
One person found this helpful
Helpful
Report abuse

MrsCWoods
4.0 out of 5 stars A great WWII love story
Reviewed in the United States 🇺🇸 on September 17, 2022
Verified Purchase
A great WWII love story that shows God always helps us end up where He wants and needs us to be!
I thoroughly enjoyed how the Catholic faith was portrayed in this novel. Highly recommend to all Christian historical fiction lovers!
Read more
Helpful
Report abuse

Mary Shannon
4.0 out of 5 stars Moving story of love and consequences
Reviewed in the United States 🇺🇸 on May 13, 2022
Verified Purchase
I purchased the audio CD and loved the narrator. The book moved very slowly and was at times boring to me in the beginning - when I got to about Disc 7 my interest was there until the end. I think the Epilogue came too quickly - after suffering so many boring details in the beginning of the book, I wanted more details as to what happened with the main characters and Julianne's parents. I do recommend this book.
Read more
Helpful
Report abuse
See all reviews

Ritu B
5.0 out of 5 stars Emothional read
Reviewed in the United Kingdom 🇬🇧 on June 22, 2020
Verified Purchase
The Memory Of Us is the first of Camille Di Maio's books I've read, and I really enjoyed it.
I was touched by the wartime story of Julianne Westcott and her forbidden love for religious man, Kyle McCarthy.
Julianne has it all on the face of it. From a wealthy Liverpudlian family, she has all the luxuries a girl desires, including her beauty, and suitors to match, but her heart is insistent in its demand to love only one, deeply unsuitable man.
Kyle is the son of a gardener and is destined to become a Catholic priest.
Julianne's Protestant background means even a hint of a union between them would cause great grief.
Still, you can't help who you love...
I was wrapped up in the blossoming love story of the two and wanted to cry at the twists and tragedies that befall a near-perfect couple and their love story.
Oh, and the deep secret hidden away by her parents... Not giving anything away.
A wonderful, heartwrenching read.
Read more
Report abuse

The story of a woman from when she was a young girl from a well-to-do family to an old woman, battered and bruised by her life and life choices. A very moving book.

One criticism though. I seen to recall at least 2 instances of Julianne taking a shower, at least one of which was when she was at home in her flat which i think may have been above a shop or something. Well, I'd say this would've been highly unlikely because a bath would've been the norm in pre-war Britain, not a shower. It is also unlikely that she would've had her own bathroom in rented rooms - a shared bathroom would probably be more like it.

It was still a lovely book. 😊
Read more
Report abuse

Grandma
5.0 out of 5 stars The memory of us
Reviewed in the United Kingdom 🇬🇧 on August 20, 2017
Verified Purchase
A beautiful story which was hard to put down. Written with feeling and much love. A must read full of surprises but tinged with much sadness. Brilliant !
Read more
Report abuse

Linda Jill Flower
5.0 out of 5 stars Great read
Reviewed in the United Kingdom 🇬🇧 on June 13, 2017
Verified Purchase
Thoroughly enjoyed this book. The story developed well and the characters were very likeable. I look forward to reading more from this author in the future.
Read more
Report abuse

EllieKat
5.0 out of 5 stars Perfect
Reviewed in the United Kingdom 🇬🇧 on November 16, 2018
Verified Purchase
I love this book so much it’s so heartwarming, one to keep and read over and over. Book in perfect condition
Read more
Report abuse
See all reviews