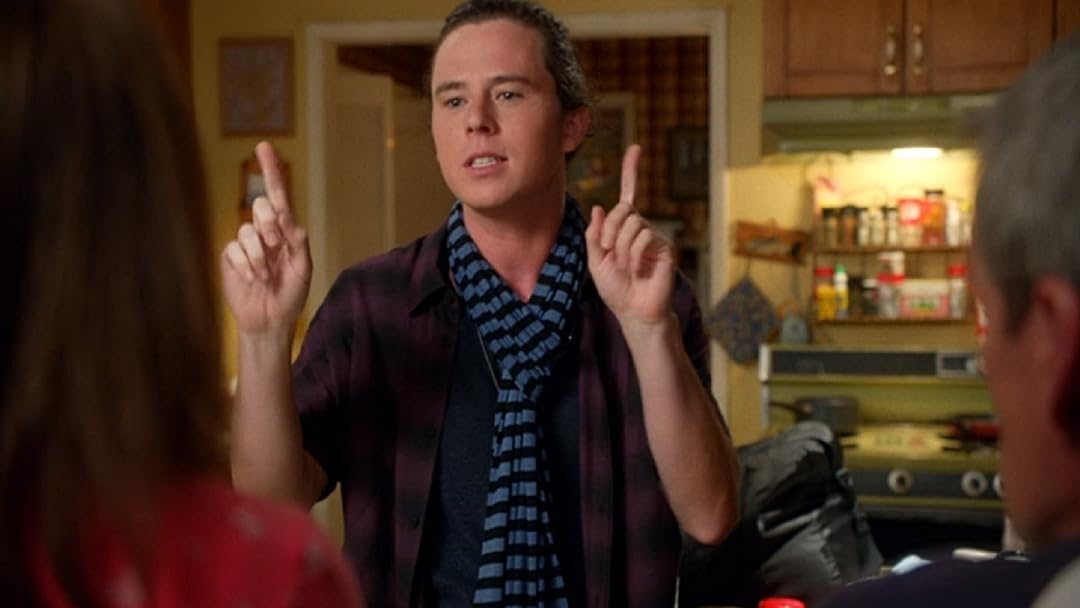 (744)
7.62018X-Ray13+
In the ninth and final season, Frankie and Mike had hoped to find themselves with an emptier nest, but with Axl now back at home, they find that hope quickly fading. Meanwhile, Sue and Sean Donahue will have to work out their unrequited feelings. And Brick makes a play to be more popular in high school. But, being a Heck, things almost never go quite as smoothly as you’d like!

Reading FiendReviewed in the United States on September 29, 2018
5.0 out of 5 stars
AUGH! I can't believe "The Middle is no more!
Verified purchase
I have been a big fan of "The Middle" ever since its first season. Loved Brick, Mike, and the rest of the gang. Although to be honest, Sue would get on my nerves, and if I had a kid like Axl, I would have shipped him off to military school as soon as he hit puberty.

When I heard they were cancelling the show (and the word got out around January) I was befuddled and bereft. I let out an anguished "NOOOOOOOOO" (how Sue-like) which lasted for months. Even my seasons 1-8 DVD collection were no solace.

When I watched the final episode, (and I'd told a fellow Middleite my predictions for the characters), I found out at least one of my guesses were correct - it involved Brick).

They're now saying ABC is working on a sequel that involves Sue. I'm hoping that the rest of the cast will make a lot of appearances, as well.

And now that the new TV season is upon us, I still keep showing up for Tuesday, 7 pm, and my show's not there. It still hurts. (I really need to get a life.)

Still this DVD is a good reminder of why I love "The Middle." It's funny, touching, and makes me glad I have no kids.

Sandra K LipskyReviewed in the United States on December 11, 2017
5.0 out of 5 stars
The Best Sitcom
Verified purchase
To me this show is better than Seinfeld! It weekly captures the nuances of relationships between family, friends and neighbors. This show makes me laugh and/or cry. I am broken hearted that this is the last season. Thank you to those who created this show and made it so heartfelt, funny and clean. Thank you for showing the strengths of having a mom and dad that love each other and support one other. They accept one another's quirks and all. The Middle has truly "done for family", their tv watching family, for 9 seasons.
19 people found this helpful

Sheryl Z.Reviewed in the United States on August 26, 2018
5.0 out of 5 stars
Love the Hecks!
Verified purchase
Who doesn't love Patricia Heaton and her ability to make us laugh...and Neil Flynn, is wonderful in this, classic man of that generation to be private yet learned to change. Charlie McDermott lends his own comical style and portrayed a teen of his generation SOOO well, love him. Eden Sher, god bless her, made us all smile, love her endearing sense of humor and acting ability. Atticus Shaffer lends a touch of gotta love the baby of the family humor, he just made this show even better. All actors appearing on the show were fabulous choices, appreciate all of them.
11 people found this helpful

Nancy RichardsReviewed in the United States on October 26, 2017
5.0 out of 5 stars
Five Stars
Verified purchase
I love the hecks please bring it back for another season there is so much left to say
14 people found this helpful

Patrick J. ArmstrongReviewed in the United States on September 23, 2018
5.0 out of 5 stars
The Middle.
Verified purchase
I absolutely love The Middle. I have the complete series on dvd. Wonderful series !!!!!!!!
9 people found this helpful

MusicbirdReviewed in the United States on September 16, 2018
5.0 out of 5 stars
Love this show.
Verified purchase
Sorry this show ended. One of the best.
9 people found this helpful

MargieReviewed in the United States on December 14, 2019
5.0 out of 5 stars
Great Family Entertainment
Verified purchase
We now own every season of The Middle. We’re sorry to see it end. This show really touches on real life issues. From being moms and dads, to the kids growing up, it has it all. Some were a bit silly, some brought a tear. So happy to have some decent family entertainment. Will start all over from the beginning at some point.
2 people found this helpful
See all reviews
Back to top
Get to Know Us
Make Money with Us
Amazon Payment Products
Let Us Help You
EnglishChoose a language for shopping. United StatesChoose a country/region for shopping.
© 1996-2022, Amazon.com, Inc. or its affiliates