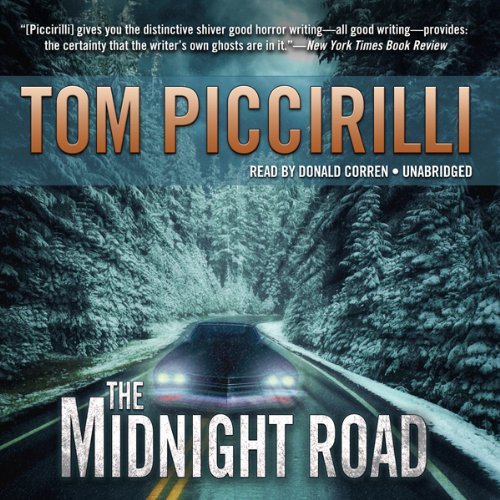 From the moment he saw the girl in the snowstorm, Flynn had less than an hour to live. But he’ll remember his last 50 minutes long after he’s dead. As an investigator for Suffolk County Child Protective Services, Flynn has seen more than his share of misery, but nothing could prepare him for the nightmare inside the Shepards’ million-dollar Long Island home. In less than an hour, that nightmare will send him plunging into a frozen harbor - and awaken him to a reality even more terrifying.

They’ve nicknamed Flynn “The Miracle Man” because few have ever been resuscitated after being dead so long. But a determined homicide detective and a beautiful, inquisitive reporter have questions about what really happened at the Shepard house - and why the people around Flynn are suddenly being murdered. Flynn has questions of his own, especially when one of the victims dies while handing him a note: “This is all your fault.” Flynn has returned from the Midnight Road - and someone wants to send him back.

Tom Piccirilli is the author of more than 20 novels, including Shadow Season, The Cold Spot, The Coldest Mile, and A Choir of Ill Children. He’s won two International Thriller Writers Awards and four Bram Stoker Awards, as well as having been nominated for the Edgar, the World Fantasy Award, the Macavity, and Le Grand Prix de l’Imaginaire.

Mel Odom
5.0 out of 5 stars Great Character and Suspense with Surprises
Reviewed in the United States 🇺🇸 on September 30, 2008
Verified Purchase
Tom Piccirilli's novel, THE MIDNIGHT ROAD, won the International Thrillers Award in July 2008. I didn't know that till after I'd read the book and did a little research on the writer. I do know that the whole time I was reading the book, I was nailed to the pages and couldn't walk away from the story.

I'd read Piccirilli before, but I'm not a big fan of horror. I have a select few authors/books that really hit that hard-to-reach spot for me when it comes to horror. I thought all Piccirilli wrote was horror and Westerns.

However, when I read THE COLD SPOT by Piccirilli earlier this year, I was pleasantly surprised to find that it was a kick-butt crime novel that felt like one of the old Gold Medal novels I cut my teeth on as a kid. I looked through the author's backlist, found several crime-related novels that I hadn't known he'd written, and ordered a half-dozen.

THE MIDNIGHT ROAD begins with tension and a great character. Child Protection Services agent Flynn is driving through a near-blizzard to respond to a call about an endangered child. Being a father and protective of kids, I was seized immediately, wanting to know what was going on and what Flynn was going to do about it. The tension that builds - first with the snowstorm, then with the creepiness of the mansion - is palpable. I grew more tense with every page, then things got totally bizarre when Flynn discovers a guy in an iron-barred cage down in the basement.

I was blown away by how quickly and weirdly the violence escalated. The mother menaced Flynn at gunpoint, ended up shooting her husband, and Flynn made an escape with the guy in the cage and the little girl. Minutes later, after a frantic chase along snow-slick roads that ends up with Flynn dying - yep, dying -- for twenty-eight minutes while submerged in a lake.

That would normally be the end of a movie, with the hero waking in a hospital so viewers would know that everything is going to end happily ever after. Piccirilli doesn't go that route. This is the Midnight Road, after all, and it's as creepy as any back road that ever wound through Stephen King's imaginary Maine. Things just get weirder.

With all the media attention the case gets because of the affluent family, Flynn finds himself labeled as hero and villain. And a killer starts stalking him, choosing to kill people around him.

Flynn is a deeply disturbed man even before the weirdness kicks in. Even before he starts talking to the ghost of the dog that drowned with him. His brother committed suicide in the car that Flynn insists on restoring yet again, a macabre tie to the only family he really cared about.

Piccirilli digs into his character and unearths a lot of human frailty that I recognized and have dealt with myself. I think everyone as. It's easy to get confused and lost when you've been through what Flynn has been through.

The action slows down through the middle of the book, but the need to know more about what was going on and what had happened to bring Flynn to where he was when I first met him kept me turning pages. Halfway through the book I gave up trying to put it down and settled in for a nice, long ride. Notice that I didn't mention comfortable. Piccirilli stirs readers up through visceral storytelling, then changes those tools out for solid, emotional jabs. And he laces it all together with the driving need to know what's going on.

If you haven't discovered this author, I'd really recommend THE COLD SPOT or THE MIDNIGHT ROAD as good starting points. Piccirilli appears equally at home writing horror, crime, and psychological suspense. Block out some time for this one. Once you start it, I think you're going to hang with every dark, dangerous curve.
Read more
Helpful
Report abuse

W. D. Gagliani
5.0 out of 5 stars There may be no better writer of noir crime thrillers (spoilers?)
Reviewed in the United States 🇺🇸 on November 11, 2008
Verified Purchase
There's just no stopping Tom Piccirilli. His novels tend to grab you where it hurts the most and not let go, not even when you've read the last page. His blending of noir crime, thriller, and horror elements is brilliant and only enhanced by a creeping sense of dark, playful humor often delivered in such deadpan it's easy to miss. For instance, Headstone City echoes Hamlet, The Sixth Sense, and The Sopranos, all with a wink. Piccirilli molds disparate elements to his will with enviable ease.

With The Midnight Road, Piccirilli invents yet another disturbed protagonist. Flynn works for NY Child Protective Services, a thankless job but satisfying to his crusader mentality. But he's haunted by his own ghosts - for instance his rebel-without-a-cause brother, who died behind the wheel when Flynn was a child. Following up on an anonymous call on a stormy night leads him to a strange household scenario, which in turn leads to a shooting, a drowning, and Flynn's "death" in his brother's restored Charger once it plunges into the frozen harbor. He's brought back to life, a true "Miracle Man." Of course, he does not return without company, and a new set of problems.

Now haunted not only by his past but also his present, Flynn becomes the target of a mysterious assassin who sends the message "This Is All Your Fault" and kills the messenger in front of him. Considered a suspect by hard-nosed cop Raidin, yet clearly not guilty, Flynn is also pursued by Jessie Gray, an attractive but hardened reporter who gets close to him but mostly seems to just want the story. In turn, he pursues a childhood acquaintance with issues of her own, who was there with Flynn the day his brother and her pregnant sister embraced their non-destiny as a James Dean blaze of glory. A film noir aficionado, he seems stuck inside a film noir plot - or many of them - with its use of the femme fatale, tough cop, bleak situation, dark quest, and suspect motivations. As in film noir, things (and people) aren't always what they seem. You can't help thinking Hitchcock would have loved to make this movie, then you can't help suspecting he did -- and Piccirilli is paying homage to those films he loves the best.

Piccirilli's work is always challenging and surreal in some respect, and here the film noir-inspired surreal roots find purchase in the black and white world in which Flynn travels, black Charger (the death car) superimposed on a stark white snowy background. Indeed, the entire novel is filled with contrasting white on black or black on white images, and you know these things don't just happen. Piccirilli manipulates the conventions of noir until they form a completely new medium, a sort of printed "film" noir which grabs you with the stark imagery it projects onto your psyche. Bleak yet hopeful, tragic yet somehow inspiring, dark and light at the same time, The Midnight Road is another triumph from the pen of a writer who makes these things look easy when we know they aren't.