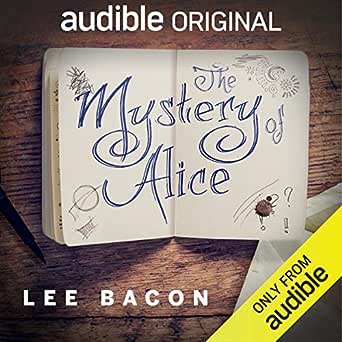 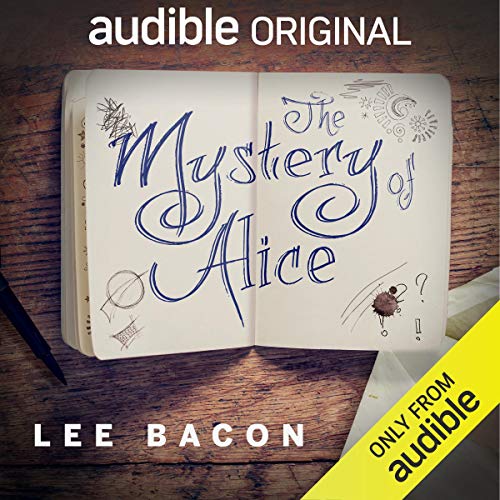 The Mystery of Alice

3.9 out of 5 stars
3.9 out of 5
23 customer ratings
How does Amazon calculate star ratings?
Amazon calculates a product’s star ratings based on a machine learned model instead of a raw data average. The model takes into account factors including the age of a rating, whether the ratings are from verified purchasers, and factors that establish reviewer trustworthiness.
Top Reviews

kitplanesue
3.0 out of 5 stars Childlike voice was annoying
Reviewed in the United States on August 29, 2019
Verified Purchase
The story began OK and moved along nicely, but the whole thing was quite a stretch to accept the ending.
Perhaps the narrator was attempting to sound like a teenage girl. She did, but her voice was very irritating. A normal female voice would have been more agreeable to listen to.

ChemicalMom
5.0 out of 5 stars Easy listening for entire family.
Reviewed in the United States on August 21, 2019
Verified Purchase
We listened to this on a road trip. My husband, daughter(11), and son(9), and I all enjoyed it.
Read more
One person found this helpful
Helpful
Comment Report abuse

Amy
4.0 out of 5 stars Such a fun listen!
Reviewed in the United States on June 11, 2019
The Mystery of Alice is an Audible exclusive. It's written in "vlog" style, and is narrated just perfectly. I absolutely loved it, and got to enjoy it while going the long way to see my friend.

I thought this book was so fun. A young adult novel with a mystery at the core of it. At first, I was wary of the vlog style because I don't typically like it, but I thought it really worked for the story, and the narration was really just outstandingly done!

However, I had to take away one star because I am supposed to somehow believe that these characters are in middle school?? I just couldn't get behind that. I thought they seemed immature at times--like when the main character invents new words for her dictionary--but even a high schooler could do that, especially one who is a self-described dork. I would have liked this book sooo much better if it was supposed to be high school instead of middle school. I kept thinking "there's no way these kids are only in middle school" all the way until the very end, and after even!

Anyway, this book is absolutely worth the read...er, worth the listen, and I do suggest it! I liked the ending--while I thought it was a bit far fetched, it was still surprising and good. But mainly, I enjoyed listening to the book. It was a really fun read that made my drive go much faster. Thanks, Audible!

Nuin Giliath
3.0 out of 5 stars Teen mystery drama
Reviewed in the United States on June 25, 2019
This was a fun way to pass time. I was reminded of teen mystery dramas such as Pretty Little Liars. I liked the creativity of this being told through a video diary format along with the incorporation of a full cast and sound effects. I also enjoyed the puzzle that Emily had to solve as part of her scholarship admission test as it reminded me of an escape room. I found myself most invested at the start and end of the story as everything was being established and resolved (conveniently and neatly as it may have been). I will say that Emily spent a good chunk of the middle portions just babbling which made listening to this a bit of a chore. The mystery was fairly tame and the characters were rather one-dimensional, but I expected this to be the case based on the targeted audience.

While this is definitely aimed at young readers, the narrators did not sound anything like the middle school students they were portraying. In fact, I often forgot that these characters were supposed to be thirteen years old because they both spoke and sounded like they were much older. It would be more believable if these characters were in their later teens. I imagine that readers/listeners closer to the middle grade age group might enjoy this audio drama.
Read more
2 people found this helpful
Helpful
Comment Report abuse

FromTheOzarks
5.0 out of 5 stars Great book!
Reviewed in the United States on June 15, 2019
I had to write a review, even though I have finished only about 60%. The story is great. The narration is great. There is some humor and some really good suspenseful passages. This was probably written for younger teenagers, but I am 75 and I am really enjoying it. It was one of Audible's free originals and I did not check it out very well. I admit that had I known it was for such a younger audience, I would not have selected it. I was pleasantly surprised. So don't let the intended audience stop you from getting it.
Read more
4 people found this helpful
Helpful
Comment Report abuse

Lonnie-The GreatNorthernTroll-Moore
VINE VOICE
5.0 out of 5 stars Not my usual fare...
Reviewed in the United States on June 20, 2019
This book is definitely not my usual fare... A story written as a series of vlogs (video blog).  Nope, not my usual fare at all. I do enjoy a good mystery/thriller though, and decided to give this one a try... I was really surprised to see that the vlog format actually held my interest. I felt as if I was really watching the vlog as our protagonist (Emily Poe) learns all about the scholarship to one of the most exclusive Ivy League schools in the country, the boarding house where she'll be lodging, and her new BFF Alice...
The full-cast audio production was quite well done, maybe like a really nice butter-cream frosting on the cake... not really necessary, but nummy nonetheless!
If you love a good mystery with a twisted end, presented in a fresh manner, you'll want to grab this book!
Read more
2 people found this helpful
Helpful
Comment Report abuse
See all reviews from the United States