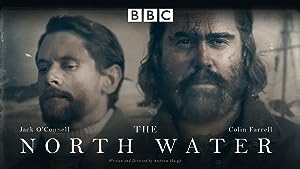 Season 1
(4)
2021TV-14
Hoping to escape the horrors of his past, disgraced ex-army surgeon Patrick Sumner signs up as the ship’s doctor on an ill-fated Arctic whaling expedition. Soon he’s confronted by a new horror, the brutish killer Henry Drax. When Sumner and his crew mates are left stranded on the merciless Arctic wasteland, he discovers just how far he’s prepared to go against the savagery of nature and man.

Gary MarkowskiReviewed in the United States on November 11, 2021
5.0 out of 5 stars
No problem with purchase, excellent program
Verified purchase
My Amazon purchase was easy, and thus far I have enjoyed the first 6 episodes. I am however having problems veiwing on a TV. Amazon's procedure for switiching to my account on their streaming channel is fairly confusing, so I watch on my lap top, which is where I made the purchase. I watched episodes 3 & 4 on the telly by using an HDMI cable, but would prefer streaming. Anyway, the acting is tremendous and the entire production leaves the veiwer with a feeling of authenticity. There are interesting plot twists and compelling characters in this very well crafted tale.

Nicholas A. DeutschReviewed in the United States on October 17, 2021
5.0 out of 5 stars
Another Fine Piece of Work from Director Andrew Haigh -- but WARNING! about Amazon offer
Let me say first that I have only seen Episode 1 of this. The reason I haven't gone further is not that I didn't like it: on the contrary, despite its bleakness and the harshness of the terrain (physical and spiritual) I was eager to proceed. But I had no desire to subscribe even temporarily to AMC, the only offer on view. Then this second option appeared on Amazon, offering the entire series for a flat fee. But when I hit "Purchase," it said that I had only purchased Episode 1. So I canceled the order. (Amazon, get your act together!) As the entire series is about to be issued in the UK on DVD, and as I have an all-region player, I'll be ordering that. I admire director Andrew Haigh's work enormously: Weekend, 45 Years, Lean On Pete are all exceptional films in their very different ways, and Looking (2 seasons + movie) is terrific, where Haigh's influence can be felt not only in the episodes he directed but throughout. I look forward to watching all of The North Water

MargoReviewed in the United States on November 16, 2021
5.0 out of 5 stars
Amazing in all respects!
Verified purchase
This limited series by the BBC is only available to stream on AMC+ what an incredible shame so few people will get to see it. Reviews from all critics are overwhelmingly positive for good reason.
First, the cinematography is beautiful, on and under the ship’s deck, on the streets of Hull and in the pub. But the star is the polar environment. The film crew went within 500 miles from the North Pole. Brutally cold, shifting ice floes,constant dangers.
The acting is phenomenal. Colin Farrell, unrecognizable in his weight gain, skulking gait, and menacing inflection of his dialogue, deserves every award in the book. The other actors are solid, too, but Farrell is simply amazing.
There are two episodes that are hard for the squeamish to watch. Though the seal hunt and whale kill are all sound effects and CGI and camera long shots, some viewers were unsettled. In the book upon which the series is based the depiction of these events is far more graphic. I have watched the 5 episode series 4 times now and can tell you skipping those 2 episodes will leave out essential plot points. So watch them.

I watched it thru my membership with Amazon Prime. AMC+ is one of the streaming services under Prime’s umbrella. This series is award-worthy in all respects. Wish I could give it 10 stars!