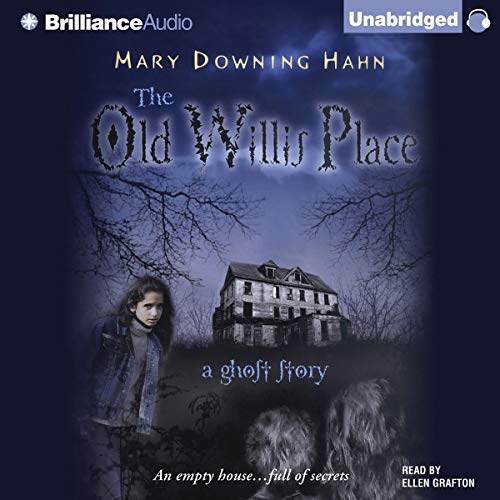 List Price: $17.49
You Save: $2.50 (14%)
By completing your purchase, you agree to Audible’s Conditions Of Use
Sold and delivered by Audible, an Amazon company
Share

4.8 out of 5 stars
4.8 out of 5
408 global ratings
How are ratings calculated?
To calculate the overall star rating and percentage breakdown by star, we don’t use a simple average. Instead, our system considers things like how recent a review is and if the reviewer bought the item on Amazon. It also analyzes reviews to verify trustworthiness.

Z Hayes
HALL OF FAME
4.0 out of 5 stars A bit slow, but atmospheric and suspenseful
Reviewed in the United States on November 27, 2010
Verified Purchase
I have been reading many of Mary Downing Hahn's books for children and YA and love her supernatural-themed stories, especially her ghost stories. The Old Willis Place is an atmospheric ghost story which centers around a pair of siblings named Diana and Georgie. They have been living on the Willis farm for many years, and yet have no parents or family taking care of them. The siblings fend for themselves and are used to being on their own. Things change when a twelve-year-old girl named Lissa moves with her dad to the farm. Lissa's dad is the new caretaker who is tasked with overseeing the maintenance of the Old Willis Place, and when he's not working, he's writing.

Diana and Georgie begin to 'borrow' Lissa's things and Lissa gets upset when her new bicycle, a favorite book, and her beloved teddy bear get taken. She writes about her angry feelings in her diary, wishing her dad would send her to school like other children instead of homeschooling her and keeping her isolated from everyone else. Diana is curious about Lissa and wishes to make friends with her, but her brother keeps reminding her of the 'rules' which can't be broken - rules such as not being seen by Lissa and her dad, not talking to anyone else, etc.

When Diana eventually breaks the rules and becomes Lissa's friend, terrible consequences follow. Something old and malignant is unleashed when Lissa breaks into the Old Willis Place, and secrets long buried come to light. The story moves quite slowly in the beginning, and only takes off after Lissa enters the Old Willis Place. Children ages 9-12 will enjoy this suspenseful ghost story.
Read more
7 people found this helpful
Helpful
Report abuse

KimDee
5.0 out of 5 stars One of my favorite novels
Reviewed in the United States on December 3, 2016
Verified Purchase
This novel is awesome. It has an ending that is so heart-warming and touching that it brought tears to my eyes. I have read it several times because I use it in my classroom each year, and the ending still has the same effect on me. Even though it is a good, chilling ghost story, it contains a theme and message which is a good life lesson, which is not just for children, but all of us. I would love to see this story as a movie.
Read more
8 people found this helpful
Helpful
Report abuse

Angie
5.0 out of 5 stars Enjoyable
Reviewed in the United States on July 6, 2020
Verified Purchase
Though sad, this book was enjoyable. It's a ghost story of a different kind. An unexpected ghost story. The writing is very good and so is the grammar. I wasn't sure who the ghost was to start with until way into the story. Found myself wondering. Good ending, but sad.I liked it.
Read more
Helpful
Report abuse

Ijaz Sarwar
5.0 out of 5 stars My daughter loved it.
Reviewed in the United States on November 28, 2020
Verified Purchase
This was gift for my 5th grader for the points she earned :) She loved it and keep talking about it.
Read more
One person found this helpful
Helpful
Report abuse

Rebecca
5.0 out of 5 stars Great story!!!
Reviewed in the United States on March 24, 2019
Verified Purchase
Excellent story! It pulled me into it and the plot was not predictable. Several surprises at the end. I recommend this book. There are a few curse words that really did not need to be in it.
Read more
2 people found this helpful
Helpful
Report abuse

T0keahontas
5.0 out of 5 stars Good Condition
Reviewed in the United States on April 7, 2021
Verified Purchase
I wanted this book because I read it back in elementary school and wanted to reread it as an adult. It arrived quickly, its just as good as I remember it, and the book was in excellent condition.
Read more
Helpful
Report abuse

SLR
4.0 out of 5 stars Thought provoking
Reviewed in the United States on October 7, 2012
Verified Purchase
Have you wanted to go into the old house at the end of the road? Have you walked through the woods and heard footsteps in the leaves behind you? Have you sat on a bench in the fall sunshine and heard a sigh beside you? Have you wondered about spirits that may lurk around you? Have you stared at a pale, thin figure with dark, wide eyes and thought...real or dead? You will thoroughly enjoy this book of dead children, banshee screaming dead old lady, murder, snakes and creepy broken houses. A quick read...but best done in the day!
Read more
2 people found this helpful
Helpful
Report abuse
See all reviews

Elle Ess
3.0 out of 5 stars The Old Willis House - A Place to Spend a Quiet Afternoon
Reviewed in Canada on March 26, 2013
Verified Purchase
Told from the perspective of the restless spirit, this book is a mildly suspenseful, slightly frightening tale which is well paced - it may capture your attention so that you read it right through in a single sitting.

"The Old Willis Place" is a good read for a lazy afternoon and may have appeal for audiences ranging from 9 and up. The characters and dialogue are believable. The atmosphere of horror and sadness is not overdone. Unlike many other books in this genre, "The Old Willis Place" doesn't have pages of repetitive, irrelevant or unneccessary descriptions (yahoo!) The only drawback to this book was that it was somewhat predictable and the ending didn't pack the punch necessary to make it a truly excellent ghost story.
Read more
Report abuse

the5thsister
5.0 out of 5 stars Five Stars
Reviewed in Canada on January 12, 2018
Verified Purchase
Great story
Read more
Report abuse
See all reviews
Back to top
Get to Know Us
Make Money with Us
Amazon Payment Products
Let Us Help You
EnglishChoose a language for shopping. United StatesChoose a country/region for shopping.
© 1996-2021, Amazon.com, Inc. or its affiliates