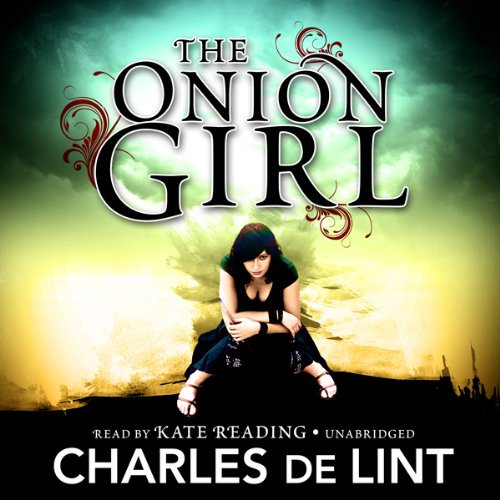 Charles de Lint (Author), Kate Reading (Narrator), Blackstone Audio, Inc. (Publisher) & 0 more
4.7 out of 5 stars 149 ratings
See all formats and editions
Sorry, there was a problem loading this page. Try again.
In his stunning works of magic and danger in the modern world, Charles de Lint has brought an entire imaginary North American city to vivid life: Newford, where magic lights the dark streets, myths walk clothed in modern shapes, and a broad cast of extraordinary people work to keep the whole world turning. At the center of it all stands a young artist named Jilly Coppercorn, with her tangled hair and paint-splattered jeans, whose paintings capture the hidden beings that dwell in the city's shadows.

Now, at last, de Lint tells Jilly's own story; for behind the painter's fey charm lies a dark secret that she's labored to forget. "I'm the onion girl," Jilly Coppercorn says. "Pull back the layers of my life, and you won't find anything at the core. Just a broken child. A hollow girl. She's very, very good at running - but the past has come to claim her now."

Special invitation from Audible!
Learn more about Membership
List Price: $31.47
You Save: $13.52 (43%)
By completing your purchase, you agree to Audible’s Conditions Of Use
Sold and delivered by Audible, an Amazon company
Share

panton41
5.0 out of 5 stars I love Charles de Lint
Reviewed in the United States on May 21, 2016
Verified Purchase
I love Charles de Lint, but I have a warning: If you've never read him don't read this as your first book. "Try Someplace to Be Flying" or "Jack the Giant Killer" or any of his short story collections. The Onion Girl is an ugly, brutal, emotional kick-in-the-teeth about childhood sexual abuse of a pair of sisters framed in an urban fantasy. I had a Norman Rockwell childhood and found it hard to finish because you can't help but feel for Jilly and her sister. (And if anything Widdershins is worse.)

Yes, read this and feel the pain inside it, but don't do it as your first foray into de Lint's Newford books.
Read more
15 people found this helpful
Helpful
Report abuse

Athlete
5.0 out of 5 stars If you love fantasy with grit, de Lint is a genius
Reviewed in the United States on September 1, 2021
Verified Purchase
I read this book about 15 years ago. I stupidly loaned it to a friend. Anyone who reads a lot knows what happens when you loan a book. Gone. I just found a hardback version here and jumped on it. I have read many of de Lint's works and I love most of them, however this story stands heads above the others. His best work in my mind with my second favorite being several of them but one that also stands out is Widdershins. De Lint's ability to paint a story and create characters and detailed dialogue is second to none. His work is gritty and the characters you would love to know in real life.
Read more
Helpful
Report abuse

Kindle Customer
VINE VOICE
4.0 out of 5 stars Well done urban fantasy
Reviewed in the United States on September 22, 2004
Verified Purchase
It was the John Jude Palencar cover that first attracted my attention to "The Onion Girl." And after that happened, I wondered if the title of the book had anything to do with the tune of the same name on Holly Cole's fabulous "Dear Dark Heart" CD.

Having never read anything of Mr. De Lint's before, his imaginary city, Newford, with its remarkable array of characters, was totally new. No opinion is therefore offered here as to how this book compares with others in the series.

At any rate, the tale told here, and told quite well indeed (the Native American mythology sprinkled throughout is likely to intrigue you as much as the story itself), is the touching tragedy of one of Newford's beloved artists, Jilly Coppercorn, who's been wounded in a hit and run accident and is trying to recover (she refers to herself as the "broken girl" although she's apparently in early middle age at the time of the story).

As she lies in bed in the "real world" in her dream time she adventures in the fairytale-ish "Otherworld." (The constantly shifting points of view, and changes from first-person to third-person narrative only serve to heighten the sense of dislocation.) Jilly is known best for her fairie paintings and someone breaks into her studio while she's recovering from the accident and vandalizes them. Her friends, one of whom's a police lieutenant, try to find out who that person is, and whether it's the same person who ran her down.

The most memorable character, however, turns out to be Raylene Carter, who tells her story in the first person with a white trash dialect she uses to her advantage. A victim of child abuse (a subject that clearly concerns Mr. De Lint, as it should all of us), she has left her abusive family while still a teenager and seems to have spent most of the time after her departure to trying to get even. And then she finds her way into the Otherworld too. And then things really start getting interesting.

You'll probably care a lot for Jilly and her supportive friends (we should all be as lucky as she is) and Raylene and her accomplice Pinky Miller; and the minor characters are well drawn too: Toby, Lucinda, the Tattersnake, and even those "crow girls" who turn up for a cameo at the end, and provide a bit of fun, at a time when it's needed, both for Jilly's sake and ours.

Since the book's origins are North American, with its tradition of serious fiction being one thing and genre fiction quite another, it's assigned to the genre category and stamped "fantasy." But: what would have happened if Mr. De Lint had pretended he was merely translating from the Portuguese the work of, say, "Joao Da Silva," and had set the tale in an imaginary city in Brazil? Then, it probably would not have been stamped fantasy at all, but hailed as an exemplar of Latin American "Magic Realism." It might then have been taken to be serious fiction and classified differently by those who love literary taxonomy more than reading a good novel.

Which this is.
Read more
6 people found this helpful
Helpful
Report abuse

V. Burris
4.0 out of 5 stars Really Enjoyed This!
Reviewed in the United States on September 27, 2004
Verified Purchase
Unlike many of DeLint's formulaic novels where his main character finds themselves up against an evil from some ancient past, this deals more with the heart, Jilly's Heart, to be exact. It was a delight to see him stray from what seemed to be a habitual path of the formulaic for this writer. I had become somewhat of a discouraged reader due to his constant plot repetition and poor resolutions of these plots. It was refreshing to see him finally break free of this and try something new.

Jilly, is perhaps, one of the most endeared characters in DeLint's Newford sorties and I was delighted to see that he finally took the step into letting us know about the family and past history of this beloved character.

This book can be ready without reading any of DeLint's Newford stories, but those who already have will find great joy in seeing many of the old favorites coming to visit Jilly while she is in the hospital.

A story more about regret and following the paths one is given, this has less to do with DeLint's normal "urban fantasy" style and more to do with the complexities between siblings, child neglect and incest. There is more context to this story and more fleshing out of Jilly than one had before, which, is still overwhelming.

A very sad and haunting story of two sisters caught in the same situation, it is an instersting trip into the human psyche as to how both characters deal with it.

The ending was sad but redeeming as it comcludes that above all, family is everything.
Read more
2 people found this helpful
Helpful
Report abuse

Liz de Jager
5.0 out of 5 stars Another brilliant performance....
Reviewed in the United Kingdom on December 27, 2001
Verified Purchase
CDL just doesn't know how to stop, does he? In Onion Girl we learn more about Jilly - or rather, Broken Girl.
It is a heartbreaking story because of its "realness". Child abuse is a terrible subject and he writes about it with great care and greater tenderness.
Jilly is a lovely character and through this book we come to know a lot more about her friends both this side where she is known in The World As It Is as well as in the Otherworld. A lot of things come together piece by piece as the story unfolds and I personally have a huge crush on Joe / Bones.
He tries helping Jilly along with some of his canid friends and boy, do they make a ruckus!
Great story, wonderful depth, heartbreaking matter - never better!
Read more
Report abuse

yarrowtree
5.0 out of 5 stars A beautiful book that must not be missed.
Reviewed in the United Kingdom on March 21, 2002
Verified Purchase
Another uplifting book by easily one of the best authors of our time. Jilly Coppercorn shines like a dear and special friend, and all the Newford favourites provide a stunning backdrop for this moving story about Jilly and her life. I won't say too much about the story beacause the mystery was what made it so hard to put down. What I will say is if you want to escape from reality and step into a world far removed and yet somehow very familiar, then buy this book. In fact buy all of de Lints books. Like I have!!
Read more
5 people found this helpful
Report abuse

Katie rose stern
5.0 out of 5 stars The Onion Girl - reconmended
Reviewed in the United Kingdom on May 30, 2016
Verified Purchase
Amazing book,one of my favourite de Lint novels so far. Filled with suspense as well as the usual sparkles dust and magic. Intense. Highly recommended.
Read more
Report abuse

Hope
5.0 out of 5 stars Excited to have a copy to share
Reviewed in Canada on August 16, 2020
Verified Purchase
This is one of my favourite authors and one of my favourite books that's he's written. It is reasonably priced & perfect in paperback format, so that I can loan it out or tuck it in a travel purse to read on the go.
Read more
Report abuse
See all reviews