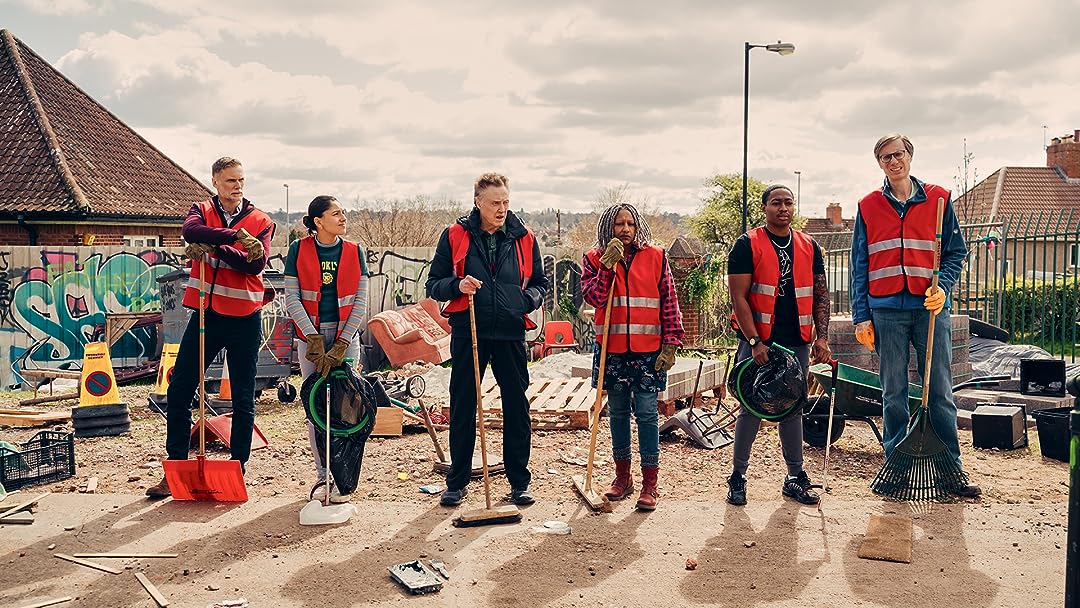 (820)
7.72022X-RayTV-MA
Seven strangers begin Community Payback sentences, renovating a derelict building in Bristol. But a criminal mistake will unite these people in ways they had thought impossible.

KerbearReviewed in the United States on November 17, 2022
5.0 out of 5 stars
Absolutely Hilarious
Verified purchase
I absolutely love everything about this series. The cast is amazing…& together even more terrific! Please continue this show..must have a season 3!
2 people found this helpful

RReviewed in the United States on November 29, 2022
5.0 out of 5 stars
Good
Verified purchase
Good, fun, funny

monikaReviewed in the United States on December 3, 2022
1.0 out of 5 stars
good plot idea but sooo wasted
Verified purchase
If you are an open minded individual looking for quality, within the first 4 episodes you will find this show....garbage.

TammiReviewed in the United States on October 9, 2022
4.0 out of 5 stars
So worth watching
I love Stephan Merchant! The characters are diverse enough, and the story line believable. I enjoyed it.
4 people found this helpful

Kristin LReviewed in the United States on September 26, 2022
4.0 out of 5 stars
Hilarious Thriller
I love the combination of suspense and laughter and the writers and several of the actors are spot on bringing it!
3 people found this helpful

U. GardnerReviewed in the United States on September 19, 2022
4.0 out of 5 stars
Nothing is Perfect but, this comes close
Loved it. Just finished season 2, and we need more.
4 people found this helpful

A. K. MooreReviewed in the United States on November 7, 2022
5.0 out of 5 stars
Wow - hooked immediately
After trying and giving up on about 20 series in a row, I gave this a shot and was blown away. It's created by Ricky Gervais's collaborator Steven Merchant, who's also in the tremendous ensemble cast. Great characters; great mix of humor, character drama and action. Best thing I've found in a while. It's a much more subtle type of humor and much less over-the-top characters than the usual Gervais/Merchant fare, which I also love, but these characters are all very real, flawed and relatable. I'm only one episode in but if it stays as good as the pilot it's a drop-dead classic.
One person found this helpful

Colonel DReviewed in the United States on May 27, 2022
4.0 out of 5 stars
A unique dramedy from the BBC that is a fun diversion
I stumbled on this BBC series on Amazon Prime quite by accident and was hooked after the first episode. The premise is simple; a collection of seven anti-heroes who have all be sentenced to community service for various minor crimes bond while working off their time cleaning up a local community center.

A more unlikely group would be hard to find:

- Frank Sheldon (Christopher Walken of all people) is an American who is recently out of prison and wearing an ankle monitor while living with his daughter and grandchildren.

- Greg Dillard (Stephen Merchant who is also the series creator and directs and writes many of the episodes) is a nerdy, socially awkward unsuccessful lawyer.

- Christian Taylor (Gamba Cole) is a young man who takes care of his young sister on his own and is being coerced by criminals into dangerous activities.

- John Halloran (Darren Boyd) is an entitled businessman who is struggling to keep his family company from going bankrupt.

- Lady Gabriella “Gabby” Penrose-Howe (Eleanor Tomlinson, who “Poldark” fans will recognize from her role as Demelza) is a wealthy, spoiled, fashionista, and social media influencer with dreams of putting on a music festival.

This collection of misfit ‘toys’ gather to pick up trash and paint walls under the supervision of police detective wannabe Diane Pemberley (Jessica Gunning) working off their time with little enthusiasm. As the season progresses we learn more and more about each flawed character and how they came to be in this situation. The writing is quite good with many comic, dramatic, and at times thrilling moments that keep the audience engaged and pulling for this motley crew. When three of the “outlaws” stumble on a duffel bag stuffed with cash the plot becomes more complicated with potentially fatal consequences for some of the group.

The performances are all very well done and believable. Clocking in at just 6 episodes that run around 50 minutes each “The Outlaws” is a quick watch that stands out in an ocean of dopey reality shows, repetitious game shows, tired reboots, and seemingly never ending scripted dramas (talking about you “NCIS” and “Grey’s Anatomy”. Disregard the 1-star reviews from people who feel any show with a diverse cast is trying to make some kind of “woke” or social justice statement; I didn’t get that vibe at all from “The Outlaws”. Obviously the series found an audience as it has been renewed for a second season which I will be delighted to see when it becomes available.

17 people found this helpful
See all reviews
Back to top
Get to Know Us
Make Money with Us
Amazon Payment Products
Let Us Help You
EnglishChoose a language for shopping. United StatesChoose a country/region for shopping.
© 1996-2022, Amazon.com, Inc. or its affiliates