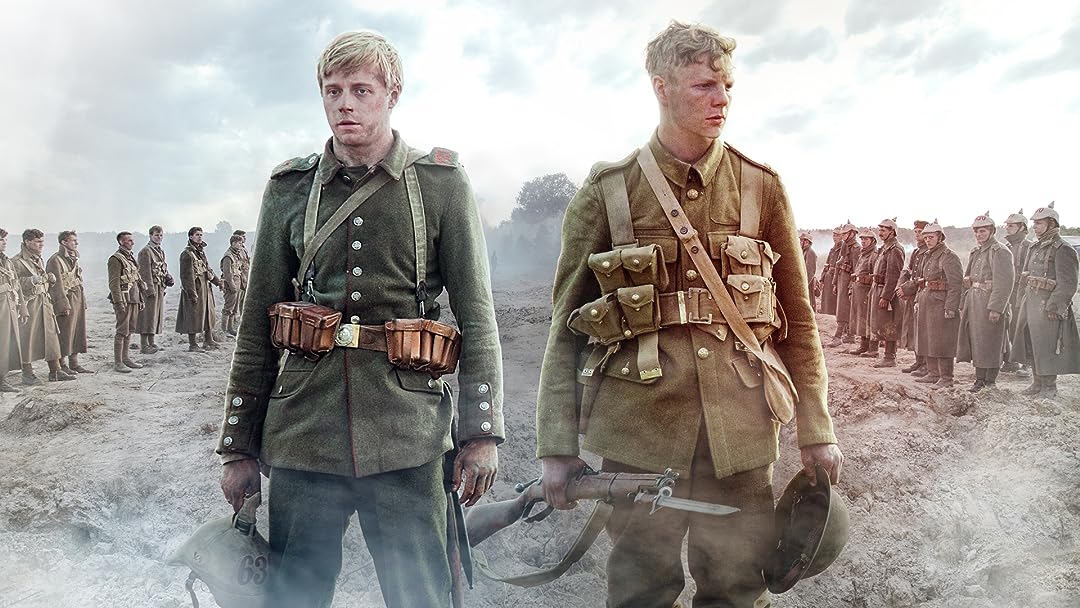 Season 1
(225)
6.9201413+
This moving, powerful drama spans the years of the war from 1914 to 1918. As the conflict unfolds, so do the boys' incredible stories. Thomas and Michael are two young men for whom the war has little mercy, no matter which side they may be fighting for. Over five years, we follow their lives as they grow up, lose friends and find love amid the horrors of the war.

Josue A. PerezReviewed in the United States on January 22, 2019
5.0 out of 5 stars
Nice series
Verified purchase
No problem with the DVD format, it works perfect on region free DVD player. Amazing delivery timing.
3 people found this helpful

5 starsReviewed in the United States on June 21, 2018
5.0 out of 5 stars
As real as it gets.
War! As a VietNam combat vet, USMC, this was so real and so sad. Politicians sit in polished offices, while our young men and women die on the battlefield. Without politicians, the world would be a better place. They destroy lives and families with the stroke of a pen. The film was real, acting was excellent. When will we ever learn.
36 people found this helpful

The two leads play a German youth and a British youth who sign up that way, and the film follows their separate experiences of the interminable and increasingly meaningless war. (They do cross paths now and then, which adds further meaning to the film.) The acting of both leads is fine.

The main issue with the miniseries is that it was deliberately aimed at a younger audience and family viewing, so it is slightly sanitized, and slightly one-dimensional, and adults may find it somewhat unfulfilling. There is a certain eloquence about it, however, especially as it concludes. And it can certainly be very educational for younger viewers.

One issue that seems inevitable is that it is initially hard to tell apart the British and German regiments, since British actors were used for both and their uniforms are not terribly distinctive. Although it's clear in the beginning which is which because German soldiers were still wearing ornate pointed helmets, the Germans had soon dispensed with them and so the viewer has to pay very close attention from the very beginning. Theoretically the BBC could have found young Germans to play all of those roles (speaking English with German accents), but I'm fairly certain that would have been way out of their budget for this relatively minor project which was one of dozens of WWI productions commissioned for the centenary of the war.

I'm not sure who I would recommend this for, but it does have a certain slow-moving eloquence, and is suitable for young viewers, young history or war fans, and family viewing.

PeachyPatReviewed in the United States on May 8, 2018
4.0 out of 5 stars
War with a human touch
I have watched a lot of war movies. For some reason I really got involved with the characters in this one. Other viewers have mentioned that the ending is contrived as are several other scenes. I also have to admit that I was confused, at first, about who was who. The two lead actors look very similar and it took me awhile to tell them apart. I like that there was not a lot of blood and gore. Don't think it's necessary just because someone is hurt or been killed.

Thought the battle scenes were well done. The battle at the end of the third episode is especially nerve wracking. I felt I was in the middle of the battle with the characters and yet looking at it from afar. There are some typical hand wringing moments when you're hoping for a good outcome but know that all is probably not going to go well.

I think this might be a good movie to see with teens and young adults. Many times the realities of war get lost in all the politics and nation bashing. It would do us all good, especially for the people who send us out to fight, to think about those fighting and those waiting for them to come home. Could lead to some good discussion.
16 people found this helpful

Melody BReviewed in the United States on March 22, 2019
4.0 out of 5 stars
Romantic version of world war 1
Enjoyable but somewhat romanticized and sterilized view of World War 1. This is understandable since the target audience is young adolescents. I still enjoyed this series even though I am far from the target demographic.

The scenes were beautiful and the music enjoyable as was the acting. That is part of my issue with it though, beautiful scenery is not quite realistic and neither is the way no blood was ever shown. I have no doubt this was because of younger viewers however I disagree that this is best. In some scenes the cause of an injury or death is not all that clear as a soldier simply fell over dead and I was not sure why. I don't think we do any favors to the young to plant a romantic version of war in their heads instead of the more realistic portrayal in many movies and series.

However all that being said I did enjoy the way both the British and German soldiers views were shown and how they were fighting for the same reasons, that being love of country/ideals and a desire to prove they were brave and not cowards. Over 100 years later and people all over the world still fight for the same reasons.
9 people found this helpful
See all reviews
Back to top
Get to Know Us
Make Money with Us
Amazon Payment Products
Let Us Help You
EnglishChoose a language for shopping. United StatesChoose a country/region for shopping.
© 1996-2021, Amazon.com, Inc. or its affiliates