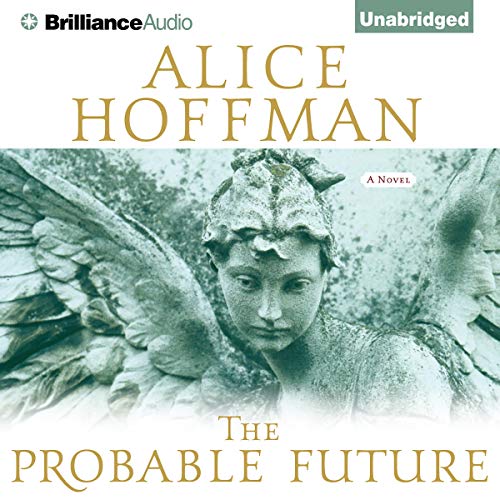 Alice Hoffman (Author), Susan Ericksen (Narrator), Brilliance Audio (Publisher) & 0 more
4.4 out of 5 stars 471 ratings
See all formats and editions
Sorry, there was a problem loading this page. Try again.
Women of the Sparrow family have unusual gifts. Elinor can detect falsehood. Her daughter, Jenny, can see people's dreams when they sleep. Granddaughter Stella has a mental window to the future - a future that she might not want to see.

In Alice Hoffman's tour de force, this vivid and intriguing cast of characters confronts a haunting past - and a very current murder - against the evocative backdrop of small-town New England. By turns chilling and enchanting, The Probable Future chronicles the Sparrows' legacy as young Stella struggles to cope with her disturbing clairvoyance. Her potential to ruin or redeem becomes unbearable when one of her premonitions puts her father in jail, wrongly accused of homicide. Yet this ordeal also leads Stella to the grandmother she was forbidden to meet, and to an historic family home full of talismans from her ancestors.

Special invitation from Audible!
Learn more about Membership
List Price: $20.97
You Save: $2.98 (14%)
By completing your purchase, you agree to Audible’s Conditions Of Use
Sold and delivered by Audible, an Amazon company
Share

4.4 out of 5 stars
4.4 out of 5
471 global ratings
How are ratings calculated?
To calculate the overall star rating and percentage breakdown by star, we don’t use a simple average. Instead, our system considers things like how recent a review is and if the reviewer bought the item on Amazon. It also analyzes reviews to verify trustworthiness.
Top reviews

Ruth
5.0 out of 5 stars Attn: Book Club haters - I'm one of you . . . and I loved this book
Reviewed in the United States on October 22, 2018
Verified Purchase
I should have hated this book. I really should have. I normally loathe "book club" books - many of them strike my cynical self as the sort of touchy-feely, everyone-comes-together-by-love-and-magic stuff where you'd really like to drill a hole and let some sap run out before you even try to read it. But I didn't hate this book. It's first recommendation was that I saw it reviewed in Daedulus and it looked interesting. So I went to Amazon and checked out the "Look Inside Me" feature.

The writing grabbed me in the first sentence and wouldn't let go through the entirety of the lengthy sample. That was all it took. I uploaded to my Kindle and could NOT put it down till I was finished. I will recommend it to friends. This is all due to the lyrical writing which kept singing in my head . . . despite the fact that this is definitely a Book Club type book and the ending brought reform to a character (Will Avery if you are looking further) in a way that was utterly unrealistic and even annoying. And I'm not talking about the magical realism - which was actually beautifully done and believable.

I can ignore that. I will ignore it. Just please, please don't send me to a Book Club to discuss symbolism or intergenerational communication or deep "meanings." And if you feel the way I do about such things, don't worry. You'll still love the book.

PS: Book Club lovers: save yourself the trouble of commenting. I know you're all nice, sincere people who keep reading alive. Good for you. Feel free to discuss the haters at your next meeting. I promise my feelings won't be hurt.
Read more
28 people found this helpful
Helpful
Report abuse

Cherei M.
5.0 out of 5 stars Who wants to be normal? Not me! If that's YOU too.. you'll love this story!
Reviewed in the United States on May 30, 2019
Verified Purchase
Another fabulous read from Alice Hoffman! Women will easily identify with the characters as they truly do mimic our day to day lives. Just filled with less obvious trials and tribulations of being a Mother, Daughter, Granddaughter.. neighbor, friend, or enemy! I loved that the family's history goes back to the founding days of our nation. What a fascinating gift to each generation of women upon their thirteenth birthday. They have no idea what that gift will be.. until they wake up on their birthday and find out what new talent they've had thrust upon them.

Such an interesting story! I'm finding that I truly enjoy anything written by Alice Hoffman. I foresee many more of her books being added to my library over the years! :) Good stuff!
Read more
7 people found this helpful
Helpful
Report abuse

Leslie Lindsay
4.0 out of 5 stars Magical & Lyrical
Reviewed in the United States on January 29, 2015
Verified Purchase
Let's go for 4.5 stars on this one. I have a new love and it's not that cashmere scarf I got for Christmas or the way my basset looks at me with those soulful brown eyes. It's Alice Hoffman. Well, I don't *know* her, but I like her writing.

THE PROBABLE FUTURE is one that has "spoken" to me for some time. While it was published over ten years ago, I had never read it till now. It clogged my "wish list" and "to be read" pile for awhile. Why I hadn't started sooner, I don't know. Sometimes, like the words we read, the ones we read need to be carefully cultivated. I picked it up and fell into her lyrical world of fictional New England town Unity and into the clutches of the Sparrow women.

The first half hooked me right away: disagreeable 12-year old Stella wakes up on her thirteenth birthday with a new gift: she can see how others are going to die. As if that isn't creepy enough, she "sees" a woman at her birthday dinner get brutally murdered. I was under the spell that THE PROBABLE FUTURE would be a page-turning whodunit with elements of literary fiction and mysticism woven throughout.

The middle third of the book focuses almost entirely on the Sparrow family in a small town of Unity tucked into the layers of Cake House, the historical home of which they originate; it's the refuge for young Stella, whom after having these disturbing visions is shuttled away to out of safety.

I wouldn't go as far as to say the story unraveled from there, but it took in a new focus: mother-daugher relationships, the past/history of a town and family. We begin to understand why the Sparrow women are the way they are (Stella's mother has her own gift, as does the grandmother). I kept wondering about the initial hook: the murder of that woman.

Hoffman does get us back on track, but much of the murder stuff gets...well, buried and is less substantial. If you know this going in, then I think you'll be fine.

The writing is superb--plenty of attention to detial, settings come alive, and a certain breath of confidence blown into each character. I did, however tire of the bee analogies, as well as that giant oak tree and peach trees brought by sailboat. The points were belabored and tiresome.

Overall, I really liked this book, it made me think and it definitely has improved my overall storytelling in a magical sense
Read more
15 people found this helpful
Helpful
Report abuse

Charlottekrn BookfairTop Contributor: Historical Fiction Books
VINE VOICE
3.0 out of 5 stars Interesting Story!
Reviewed in the United States on May 10, 2017
Verified Purchase
The imaginary tale, filled with folklore, centers on the Sparrow family of women, and of the difficult relationships existing between the three women. The Sparrow women, who trace their ancestry to the American Revolution, each possess a different and special gift.
Amid colorful imagery and descriptive characters, Hoffman offers the message that what is believed, may not always be what is true, and that the power of love for family, transcends all else.
Though perhaps not Hoffman's best work, the story flows easily and offers an interesting storyline.
Read more
2 people found this helpful
Helpful
Report abuse

L. Lowe
3.0 out of 5 stars All over the place
Reviewed in the United States on June 20, 2017
Verified Purchase
This story wants to be magical, a love story, a mystery (kinda), and historical all at the same time and it is just too much. The timeline is wonky and difficult to imagine. Seems like everything happens within a very long, improbable two weeks. Random metaphors scattered throughout. The guy who killed his girlfriend seems like an afterthought. It was a thing, then not a thing, then he was gone with no other mention. The story was disjointed. One minute Will is under lock and key, and the next he is cleared of all charges and has been living free as a bird for a while. All in one sentence. More than a few times, I wondered if I'd missed something.
This should have stayed with the Sparrows' stories.
Read more
2 people found this helpful
Helpful
Report abuse

Idaho buyer
4.0 out of 5 stars Alice Hoffman weaves a good story
Reviewed in the United States on October 7, 2020
Verified Purchase
Hoffman is a talented writer. This book was not one of my favorites of hers (The World We Once Knew and Faithful) are my favorite as well as the Prequel to Practical Magic (title escapes me). This one is full of her amazing descriptive language; I just didn't sink into the plot as much as with the others mentioned.
Read more
One person found this helpful
Helpful
Report abuse
See all reviews

Keith McRobert
5.0 out of 5 stars Read this book.
Reviewed in Australia on April 22, 2021
Verified Purchase
Well written, very interesting.
Read more
Report abuse
See all reviews
Back to top
Get to Know Us
Make Money with Us
Amazon Payment Products
Let Us Help You
EnglishChoose a language for shopping. United StatesChoose a country/region for shopping.
© 1996-2021, Amazon.com, Inc. or its affiliates