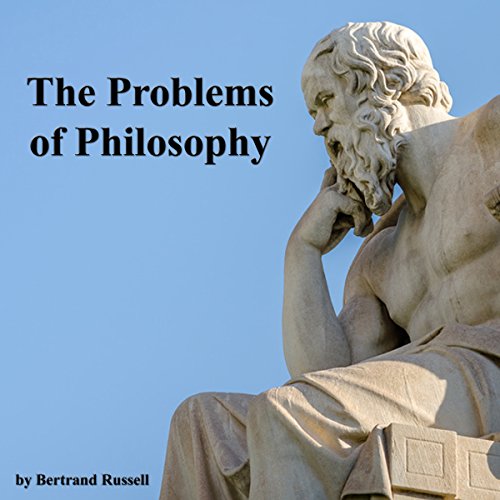 The Problems of Philosophy

List Price: $17.47
You Save: $10.48 (60%)
By completing your purchase, you agree to Audible’s Conditions Of Use
Sold and delivered by Audible, an Amazon company
Share

4.4 out of 5 stars
4.4 out of 5
495 global ratings
How are ratings calculated?
To calculate the overall star rating and percentage breakdown by star, we don’t use a simple average. Instead, our system considers things like how recent a review is and if the reviewer bought the item on Amazon. It also analyzes reviews to verify trustworthiness.

Elijah Logozar
VINE VOICE
5.0 out of 5 stars Conceptually Dense
Reviewed in the United States on March 2, 2021
Verified Purchase
How do we obtain knowledge? Why do we know what we know? How does logic work, and when can we trust it? What sorts of knowledge are intuitive, and when can we trust our experience? What are the limits of knowledge, science, and philosophy? Why is this important? Russell goes into such topics by summarizing his take on philosophical developments. Despite how dense the concepts are and not being philosophically trained, I found this book approachable and understandable. Russell did this on purpose, trying to make Philosophy readable for a general audience. It's only about 150 pages long, so it can be read in 3-5 hrs if needed. I deeply appreciated how Russell explains using pure analytic text and doesn't water down the concepts; precision is clearly important. I highly recommend 'The Problems of Philosophy' for those who would like to understand Philosophy better and know where to start when seeking the truth.
Read more
3 people found this helpful
Helpful
Report abuse

KLP
4.0 out of 5 stars Is the table really there?
Reviewed in the United States on September 3, 2016
Verified Purchase
This is a thought-provoking survey of perception, life and everything we normally presume from daily life. I would think that the average Joe isn't going to sit down and casually delve into the contents of the book and then really understand what was absorbed. You have to be prepared to carefully peruse Russell's thought process and devote a fair amount of thought to his structure. I found that the book was not necessarily conducive to a quick "skimming", but it was useful to zero in on certain chapters and topics as opposed to just reading from front to back. A minor note: perhaps this book was "illustrated" when originally published, but there are no illustrations now in the electronic version.
Read more
14 people found this helpful
Helpful
Report abuse

R. Kallet
5.0 out of 5 stars Accessibly Written About Important Philosophical Topics
Reviewed in the United States on July 12, 2021
Verified Purchase
Bertrand Russell had the ability to write elegantly for an introductory (or higher) undergraduate level course about philosophical topics and done in such a way that renders these topics much easier to grasp than is often the case. That it was done by one of the most brilliant minds of the 20th century speaks volumes about who this man was and his obvious love of teaching.
Read more
Helpful
Report abuse

Andrew Oliver
5.0 out of 5 stars Philosopher: How The Soul/Spirit/Brain Singularity/Conscious Mind Interacts Via Its Sense Data Interface To The World
Reviewed in the United States on March 1, 2013
Verified Purchase
Originally published in 1912 before the great dumbing down of English philosophy by Wittgenstein and his followers ... with their infinite regression of infinitely skeptical doubting of the obviously true!

Describes the heuristic from the point of view of the conscious mind as to how it experiences the certain belief in basic remembered facts, such as that that the text 'fact' is on a computer screen in front of my face right now being seen by my own eyes!

Also describes the similar certain belief we have in the logical and mathematical a priori. For example, Bertrand Russell would see the result from elementary number theory that 2 + 2 = 2 * 2 as an a priori theorem.

Dallas Foley
4.0 out of 5 stars A great introduction to modern epistemology and metaphysics
Reviewed in the United States on January 2, 2010
Verified Purchase
Recently I've decided to make philosophy a hobby of mine; I've taken a few courses covering various philosophy subjects in college, and I've enjoyed them so much that I want to learn more, required reading or not. Acquainted with most philosophy basics but not much more than that, I decided to start off by ordering a few books that appeared to outline general philosophical problems, to help open my eyes to interesting new subjects and give me focus and direction in my future reading. Russell's name was familiar to me, and the book's title implied that it was some sort of general overview, so I decided to start here.

However, contrary to what I expect, I found that instead of the overview I was looking for, Russell's book focused primarily on matters of epistemology (theories of knowledge) and metaphysics (theories of reality). So, keeping that in mind, don't order this book expecting to become acquainted with all of the "Problems of Philosophy"; here, you're only going to be introduced to the topics that Russell is most enthusiastic about. Among them are questions such as "What is knowledge?", "What do we know for sure?", etc... You'll learn about logic, and Russell builds up a rather brilliant foundation for the entire philosophical process, but missing are the "layman's philosophies", subject such as ethics or political philosophy.

Having said that, I thoroughly enjoyed Russell's book, and it was a great place to start for the beginning philosopher. At times, it was difficult to read; some of his sentences can be quite lengthy and full of logic, and this isn't what one might consider light reading. It takes effort, and you have to be interested in the subject for the book to actively keep your attention. However, Russell writes as clearly as the subject permits, and gives a fantastic introduction to basic theories of knowledge. And as other reviewers have pointed out, his last chapter is particularly notable, and will inspire and bring out the inner philosopher in any reader.

I was initially disappointed when I found that this book wasn't an overview of the field, but, in hindsight, it actually served as a better starting place than any overview probably would have. Epistemology - the study of knowledge itself - is a great philosophical subject to start with, as it serves as the foundation upon which all other philosophy - the quest for knowledge - rests. I highly recommend Russell's "The Problems of Philosophy", as well as the philosopher himself - I'll certainly be sure to read more of his work in the future!
Read more
16 people found this helpful
Helpful
Report abuse
See all reviews

I hope you find my review helpful.
Read more

I hope you find my review helpful.

Walter
5.0 out of 5 stars A nice starting point
Reviewed in the United Kingdom on October 8, 2019
Verified Purchase
In this book, Russel indicates that to really get into philosophy, it's best to read some specific works (like from Decartes, Spinoza) to get into philosophy. He might be right, but it reading this book is certainly also a way to get some 'basics'. I enjoyed the book because to discussed some main philosophical issues in a general way, 'teasing' my thoughts to thing about them and continue reading more. What I also liked is the fact that this is not a summary of what modern philosophers have through, but rather a primer to start thinking yourself.
Read more
One person found this helpful
Report abuse

Ivaylo Boicov Ivanchev
5.0 out of 5 stars Starting with Philosophy
Reviewed in the United Kingdom on November 13, 2020
Verified Purchase
This book is the best start to start your philosophjy journey. It is very easy to read and condenses a lot of information. the best Thing I feel was how it made me feel i want to read more on certain topics and led me to the books I need to get to continue the joruney.
Read more
Report abuse

B. Carter
5.0 out of 5 stars Philosophy ideas to ponder...
Reviewed in the United Kingdom on April 11, 2013
Verified Purchase
This is such a good book to have nearby; it is small and easy to read. Russell starts by considering the attributes of his table and pointing out several obvious aspects of this or any other object: hardness, colour, surface, etc. Then leads us to the (also obvious) notion that all perceptible qualities of any object are not those of its constituent parts. Ultimately, the atoms that form an object do not have, as intrinsic features hardness, solidity, colour or anything that we observe with senses! The attributes that we observe are those of a large number of its parts; hardness for example is something extra! It gives support to the idea that "the whole is more than the sum of its parts!" Have a good read...
Read more
3 people found this helpful
Report abuse

daisycow
4.0 out of 5 stars Problems of Philosophy - delineated
Reviewed in the United Kingdom on May 8, 2013
Verified Purchase
This is a very good book set out in a clear and very readable style with an ability to explain difficult problems
effortlessly. It serves as an introduction to earlier philosophers as well, although not to the ancients particularly well.
Russell also invented mathematical logic which shows here at times, but it is not at all necessary to have a knowledge of this to read the book.
Although it is in no way a textbook, it is a very good accessory read and I would recommend it.
Read more
10 people found this helpful
Report abuse
See all reviews
Back to top
Get to Know Us
Make Money with Us
Amazon Payment Products
Let Us Help You
EnglishChoose a language for shopping. United StatesChoose a country/region for shopping.
© 1996-2021, Amazon.com, Inc. or its affiliates