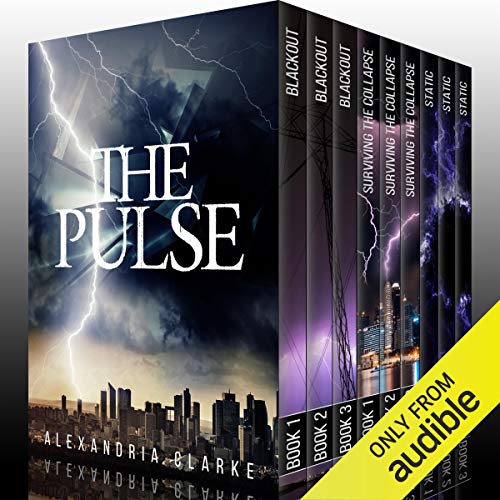 A riveting new post-apocalyptic EMP box set that keeps you guessing until the end!

EMP masterminds Alexandria Clarke, author of Blackout, and James Hunt, author of Static and Surviving the Collapse, come together in this super box set for the first time!

Blackout: A Tale of Survival in a Powerless World

After an EMP bomb detonates over the United States, frying the entire electrical grid, Georgie Fitz decides to take refuge at her estranged father’s cabin in the Rocky Mountains with her boyfriend and his family. When they arrive, Georgie discovers that a group of survivalists have already erected a camp there, and her father is nowhere to be found. As she adjusts to her new normal, she has trouble adhering to the survivalists’ rules. Can she fit in at the camp and find out what happened to her father?

The thin thread holding the civilized world together has been severed. Millions of citizens have been thrust into the unknown, breeding fear into the minds and souls of those seeking to survive. Wren Burton, an architect from Chicago, has been engulfed by the chaotic aftermath of an EMP blast. Her family is injured. The enemy is unknown. And help is nowhere to be found.

What happens when all means of transportation and communication suddenly vanish? What happens when you can’t call for help? What happens when the only person you can rely on is yourself? Captain Kate Hillman is about to discover those answers after an EMP sends New York City, and its nine million residents, back into the stone age.

Cecile Croghan
5.0 out of 5 stars What happens when the country goes dark?? Who will live and who will die??
Reviewed in the United States 🇺🇸 on May 10, 2019
Verified Purchase
The first story was very good. Can't wait to read the second section as I'm dying to see where it goes from here. The second and third stories were as good as the first. Though the storyline was the common, after the EMP bomb went of and took America back to the stone age, it was a well written and interesting. The secondary theme of a girl raised in the high Rocky Mountains by her widowed father, was a different and fascinating story. She ran away from home when she was 18 and 9 years later when the bomb goes off she takes the people closest to her back to the one place she thinks will be safest. The following happenings form the details of their lives, and deaths, as they try to recover life as they knew it. The setting in my home state of Colorado made it even more interesting to me. I often read books in this gendre so l know what rings true and what doesn't, and this rings true. Highly recommended for all ages, although it may be too intense for younger readers who might be frightened and confused about what is real and what is fiction. The second story was enough different that even though the basic storyline was the same you didn't feel like you were reading the same story just with different characters. The setting is Chicago, which strangely enough, I've also lived in. There was enough that I recognized to know the author had either lived there or spent enough time there to have a feel for the city. A family is spread out all over the city when the first event occurs and the mother is determined to get her family together and out of the city. They undergo some horrific events and she learns just how far she is willing to go to protect her children. Which as most mothers will be glad to tell you is as far as she has to go.. The third set of stories are from New York to the Rockies. The main character is an airplane pilot who barely gets her airplane on the ground. After a engine died on her airliner, she had to make an emergency landing at JFK Airport and had just got her passengers safely evacuated from the stricken plane when the EMP is set off at the airport she was heading for when she was re-routed the JFK Airport. She immediately heads to her home in a skyscaper. On the subway the power goes off and leaving the train stranded a little ways short of the station. From there on she has to fight to save her family and get them to a safe place. The storyline varies from the usual. She faces an uphill battle. It's a battle she is determined to win, whether it be the environment, damaged buildings, looters, or her fellow man losing all their basic morals or just out to find safety even if they have to use violence to find that safety. This box set has everything you could wish for all wrapped up in one place. Highly recommended.
Read more
Helpful
Report abuse

Sunny Days
5.0 out of 5 stars Money well spent.
Reviewed in the United States 🇺🇸 on February 9, 2018
Verified Purchase
I really enjoyed this box set. Very good for the money. The first story is about a women who ran from her father when she reached age 18. She was taught to be a survivalist due to her mothers murder and her fathers paranoia. She starts her own radio talk show and becomes engaged to a very man whose family is very wealthy and spoiled. Then a EMP attack on America happens. She brings her new family to her fathers hideaway but everything has changed. There are times when you have to suspend believe because she takes out well trained military men and is one of the few with common sense.
The second book is about a women who is about to get divorced with 2 small children. She is on the freeway on her way home when a grid attack happens. She and one daughter are hurt in an accident and are taken to a hospital. While there, a terrorist attack occurs. I have read only the first part of the second book. Again you have to suspend believe a little because she is one of the few who has common sense and gets her family out by the skin of her teeth.
I am really enjoying the books. They are easy to read and action packed. Never a dull moment. This is money well spent and I suspect the third book is just as good.
Read more
15 people found this helpful
Helpful
Report abuse

Tghu Verd
2.0 out of 5 stars It's the smashed avacado apocalypse - unlikely and unpalatable
Reviewed in the United States 🇺🇸 on February 14, 2018
Verified Purchase
I love a good EOTWASWKI story. Unfortunately, I found this boxset lacking the usual brutality and immorality that makes them so fun to read. That's kind of the point, for me, when everything collapses, it is literal survival of the fittest and strong protagonists come to the fore and we get to experience life on the very edge.

Reading this, it seemed the YA female lead in the first story was setup for anything but. I was hoping for a female viewpoint, as they are not common in the genre, but I did not get that. Our ptroganist is setup well with a secret preperation past, courtesy of a loony father, so when the EMP hits, she knows what to do. But then, and apparently only for the sake of the story, she balks whenever a hard non-instinctive, aggressive response is needed. That allows for the next 'OMG, how will she get out of this' situation to occur. But given the circumstances, her complete lack of common sense - at one point she goes up against five armed men, ignoring her pistol and bailing them up verbally. It does not end well - just gets annoying.

She is also generally passive across the board, yet irrationally impulsive. So she just goes along with situations that you'd expect her to push back on, then charges in without any planning or thought when it's clearly insane to do so. I found it hard to reconcile, and one or two times is fine, but it's all the time, each and every time. She never learns so never gets better at it.

Also, I've never been to Denver, but the timeframes for travel in/out of the mountains just seems too quick. If the preppie holdouts really are so close, then they are not true preppies. They'd have been overrun in days, essentially out in the open like that.

To be honest, while this boxset does not cost much, it's not that good. And that's ignoring the numerous typo's. Some grammar errors are OK, but when characters are referred by the wrong name, it's not only confusing but just shows a lack of basic authorship hygiene.

I did not like it. EOTWAWKNI is supposed to be gritty and grimey and ghastly. This is just too sanitized to be much fun.
Read more
27 people found this helpful
Helpful
Report abuse

Lindy King
5.0 out of 5 stars THE PULSE BOXSET
Reviewed in the United States 🇺🇸 on November 8, 2021
Verified Purchase
This boxset of life after an EMP blast was a great read. I have to say there were some typos and grammar issues in places, but I readily skipped over them because of the gripping overall storyline. Each of the 3 trilogies was a fabulous read and I equally enjoyed all of them. At the end of the last story, I was sad that it was the final end. Very good engaging storytelling. I totally enjoyed. Will definitely re-read again in the future!
Read more
Helpful
Report abuse
See all reviews

Kindle Customer
5.0 out of 5 stars Brilliant!!
Reviewed in the United Kingdom 🇬🇧 on December 7, 2018
Verified Purchase
This box set was very easy to read and kept me up into the early hours of the morning on several occasions! It was good to see the 'apocalypse' from different parts of the USA and to experience different peoples' struggles. Well worth getting.
Read more
Report abuse

AlanB
5.0 out of 5 stars Exciting and a very scary world
Reviewed in the United Kingdom 🇬🇧 on May 13, 2018
Verified Purchase
Brilliant writing , very believable characters and none stop start telling and action . Highly recommend this for everyone who like a good page turner.
Read more
Report abuse

Teddy's mum.
1.0 out of 5 stars Not for me
Reviewed in the United Kingdom 🇬🇧 on May 6, 2018
Verified Purchase
Gave up after trying this - slow turgid and boring
Read more
Report abuse

J.C.M
4.0 out of 5 stars Interesting
Reviewed in the United Kingdom 🇬🇧 on November 14, 2018
Verified Purchase
The basic story line is in my reading history of having a similar idea to many others. Read and make your own mind up.
Read more
Report abuse
See all reviews