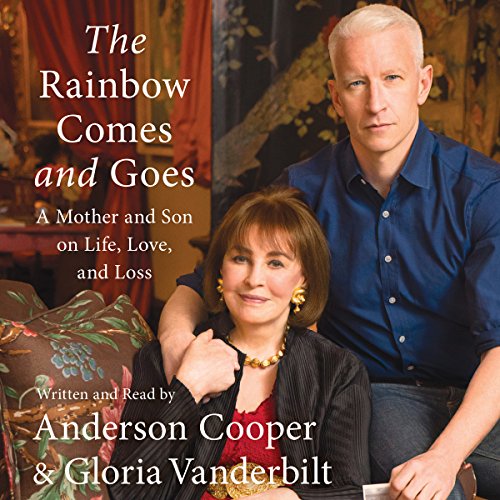 The Rainbow Comes and Goes: A Mother and Son on Life, Love, and Loss

A touching and intimate correspondence between Anderson Cooper and his mother, Gloria Vanderbilt, offering timeless wisdom and a revealing glimpse into their lives.

Though Anderson Cooper has always considered himself close to his mother, his intensely busy career as a journalist for CNN and CBS affords him little time to spend with her. After she suffers a brief but serious illness at the age of ninety-one, they resolve to change their relationship by beginning a yearlong conversation unlike any they have ever had before. The result is a correspondence of surprising honesty and depth in which they discuss their lives, the things that matter to them, and what they still want to learn about each other.

Both a son's love letter to his mother and an unconventional mom's life lessons for her grown son, The Rainbow Comes and Goes offers a rare window into their close relationship and fascinating life stories, including their tragedies and triumphs. In these often humorous and moving exchanges, they share their most private thoughts and the hard-earned truths they've learned along the way. In their words their distinctive personalities shine through - Anderson's journalistic outlook on the world is a sharp contrast to his mother's idealism and unwavering optimism.

An appealing memoir with inspirational advice, The Rainbow Comes and Goes is a beautiful and affectionate celebration of the universal bond between a parent and a child and a thoughtful reflection on life, reminding us of the precious insight that remains to be shared, no matter our age.

Special invitation from Audible!
Learn more about Membership
List Price: $23.95
You Save: $1.00 (4%)
By completing your purchase, you agree to Audible’s Conditions Of Use
Sold and delivered by Audible, an Amazon company
Share

Amazon Customer
1.0 out of 5 stars Your new accordion for your bookshelf!
Reviewed in the United States on February 2, 2020
I was so excited when I purchased this book, but once I had it in my hands, damn. I agree 100% with the other reviews. It looks like a child cut the pages, a very poor quality for a hardcover book. I am pretty sure the book itself would be good.Worst quality ever!
Images in this review

misc.
1.0 out of 5 stars Disappointing and shallow
Reviewed in the United States on February 5, 2018
Verified Purchase
Hoped this would be a good sentimental read. I do like AC very much. But the mother!!! Wow, like most people have not had to deal with hard childhoods, tragedy, etc. Half way through I was rolling my eyes at her total lack of common sense and ridiculous "excuses" for her really poor decisions due to her past. Shallow silly woman that had people bailing her out her whole life, then, like her beloved Dodo, she lets them fall through the cracks. Cold hearted, I think much like her mother was. The book is not good, and I really now do not like GV at all! Sorry Anderson. The book was also cheaply put together. Glad I got it at a discount price.
Read more
26 people found this helpful
Helpful
Report abuse

Lyric
4.0 out of 5 stars The poor little rich girl and her son
Reviewed in the United States on March 7, 2017
Verified Purchase
Interesting premise for the book -- an interview conducted over the span of a year by Anderson Cooper with his mother, Gloria Vanderbilt.
I thought that the strongest part of the book was the life of Gloria from the time she was born until her first marriage. Considering that she had a childhood and teen years that were bereft of actual "family" -- as in -- a mother and father from whom she could receive love, care, guidance etc. it's amazing that her later life wasn't more messy than it was. It was definitely interesting to learn her feelings on the "trial of the century" and being known as the "poor little rich girl." It was equally interesting and I thought, quite honest of her, to admit that when she grew older and attempted to "connect" with her mother that she found it impossible to do it because they literally did not know one another and could not find a way to discuss what had happened between them when the trial occurred and she was a child of ten caught in the middle of the situation between her mother and her aunt.
I felt that the last section of the book was less compelling because it went away from actions and instead was more about philosophy of life, love etc on the part of Gloria. I thought that Anderson Cooper, too, was quite brave to step forward and speak about his own life considering that he is in the middle of living his life as a public figure on television whereas his mother is nearing the end of hers and it's not as difficult to speak about painful experiences once they have passed as opposed to when you are younger and still facing them each day.

Overall it is an interesting book and I think that both parties tried to be as honest as possible in their responses and comments.
Overall, I enjoyed the book

Russell J. Sanders
5.0 out of 5 stars A lovely read: guaranteed life lessons
Reviewed in the United States on March 10, 2017
Verified Purchase
With this book The Rainbow Comes and Goes, Anderson Cooper and his mother Gloria Vanderbilt have completed a lovely year-long project, so personal that they could have kept it to themselves, and yet, we are fortunate that they shared. Cooper, of course, is the celebrated journalist who comes into our homes on a nightly basis and helps us celebrate New Year’s once a year. His mother is design icon, painter, actress, and legendary poor little rich girl, heir to a Vanderbilt fortune, Gloria Vanderbilt, she of jeans fame. Unlike so many of us who never quite communicate with our loved ones and then watch them die, only to wonder why we never asked questions about their life, Cooper decided to get to know his enigmatic mother. In a year-long series of emails, Gloria Vanderbilt opens up about her early life, her feelings surrounding Cooper’s father’s untimely death, her relationship with her distant mother, and the coping with Cooper’s brother’s suicide. And in these poignant, revealing emails, we learn—as does Cooper—so much about a woman who has lived a life in the spotlight yet hidden to us all, even to her son. And Cooper’s reactions to her revelations leads him to make his own revelations and conclusions about life, death, happiness, and what life is truly about. As someone approaching seventy years of age, I identified with ninety-one year old Vanderbilt. She says that by the time we reach old age, life has a way of working out, i.e. our experiences all fall into place, and we know how to accept our triumphs and our failures. And that, she says, is what life is all about. No one can be happy all the time, for if that happened, we would not know what happiness is. We must know grief to know happiness. After all, the rainbow comes and goes.
Read more
21 people found this helpful
Helpful
Report abuse

Happy Teacher
3.0 out of 5 stars I was fascinated by this book but...
Reviewed in the United States on June 23, 2019
Verified Purchase
There was so much I loved about this book. The epic story, the back and forth changing of voice, the fun ,the love, and even the pain. So you must be wondering, why just a 3 star review? The main storyteller of the book was Gloria Vanderbilt, so most of the dialogue was hers. I guess her childlike nature, the fact that she fell in love 2 MONTHS after her husband died, and that she really had no concept what a normal life struggle (like am I going to have money to fix my car to get to my job) was too much for me. I actually started to wonder about her mental health as the book went on. It was a very interesting read, and she has led a spectacular life.
Read more
9 people found this helpful
Helpful
Report abuse
See all reviews

Alex
1.0 out of 5 stars Poor quality manufacturing
Reviewed in the United Kingdom on November 11, 2020
Verified Purchase
The quality of this paperback is terrible!

I never write reviews but after spending money on a book intended to be a gift I’m angry that I’ve been sent a book that looks like it was put together in arts and crafts.

No comment yet on the content... just the quality of the book is a sham.
Read more

Alex
1.0 out of 5 stars Poor quality manufacturing
Reviewed in the United Kingdom on November 11, 2020
The quality of this paperback is terrible!

I never write reviews but after spending money on a book intended to be a gift I’m angry that I’ve been sent a book that looks like it was put together in arts and crafts.

Amazon Customer
4.0 out of 5 stars easy reading. overall a nice book
Reviewed in the United Kingdom on July 18, 2017
Verified Purchase
easy reading. overall a nice book. i found it interesting that it seems to inadvertently reveals the flaws of Gloria and Anderson. Gloria uses the book to address hers, and accept them. kind of sucks if you look up to Anderson though, as i do professionally. it shows you a very vague, unsatisfactory window into why he is so limited in his personal relations. perhaps in ten years he will write his own book on this.
Read more
One person found this helpful
Report abuse

Angela C
4.0 out of 5 stars Great business to deal with
Reviewed in the United Kingdom on March 13, 2020
Verified Purchase
Book was great although I knew a fair bit about Gloria Vanderbilt before I read it. A nice holiday read.
Read more
Report abuse

Margaret
5.0 out of 5 stars Love is important
Reviewed in the United Kingdom on May 12, 2016
Verified Purchase
A wonderful story of the connection between a mother and son, both famous, but also vulnerable.
Read more
2 people found this helpful
Report abuse