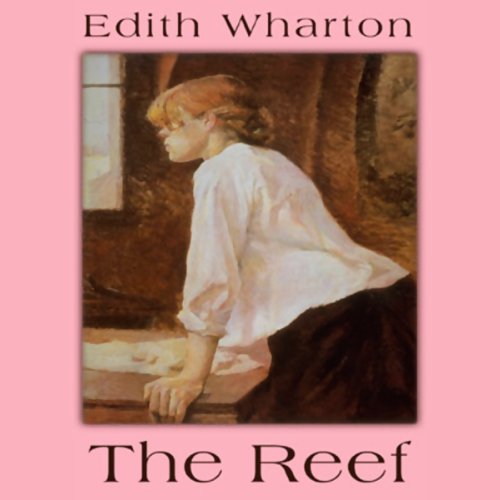 Edith Wharton (Author), Kristen Underwood (Narrator), Blackstone Audio, Inc. (Publisher) & 0 more
3.7 out of 5 stars 58 ratings
See all formats and editions
Sorry, there was a problem loading this page. Try again.
A challenge to the moral climate of the day, The Reef follows the fancies of George Darrow, a young diplomat en route from London to France, intent on proposing to the widowed Anna Leath. Unsettled by Anna's reticence, Darrow drifts into an affair with Sophy Viner, a charmingly naive and impecunious young woman whose relations with Darrow and Anna's family threaten his prospects for success.

The affair becomes the reef on which four lives are in danger of foundering: two of them innocent and two of them burdened with experience and tinged with desperation. This is a story of the drastic effects of a casual sexual betrayal and a clear-eyed assessment of the possibilities and limitations of human love.

Special invitation from Audible!
Learn more about Membership
List Price: $20.97
You Save: $9.02 (43%)
By completing your purchase, you agree to Audible’s Conditions Of Use
Sold and delivered by Audible, an Amazon company
Share

3.7 out of 5 stars
3.7 out of 5
58 global ratings
How are ratings calculated?
To calculate the overall star rating and percentage breakdown by star, we don’t use a simple average. Instead, our system considers things like how recent a review is and if the reviewer bought the item on Amazon. It also analyzes reviews to verify trustworthiness.
Top reviews

Polly *Girl
5.0 out of 5 stars Much Ado About....
Reviewed in the United States on March 23, 2019
Verified Purchase
"The Reef" is a metaphor for the tangled place people sometimes find themselves stuck in between dry land (the norms of the day) and the deep blue sea (your own emotions/feelings.) Middle-aged upper-class man re-encounters an upper-class old flame newly widowed, and wants to go to Paris to cultivate marriage to her. She writes and tells him not to come yet--no reason given. He goes anyway and is attracted to a pretty, but poor, lower-class, 24 year old; and since he's pissed off at his old flame, he wines, dines, and yes, does the wild thing with the young lady. Old flame eventually contacts him and he hurries to her side. A BIG problem then arises, because the young lady has been hired as the governess of the old flame's child and that spoils wedding plans. And if that's not bad enough, the governess becomes engaged to the old flame's step-son. WHAT TO DO? Of course, all this is written in Wharton's beautiful style using highly elegant language without ever mentioning any words that go to the very "root" the problem. Only thing that bothered me was that the young lady is held accountable for losing her virtue, but the man who took it does not appear to be just as responsible--probably okay as far as men were judged in that day and age. What a hoot of a read! Of course, a really big deal of the whole matter is made with much ado. Highly recommend. See if you can figure out the ending.
Read more
5 people found this helpful
Helpful
Report abuse

C. M Mills
TOP 500 REVIEWER
5.0 out of 5 stars The Reef is a little known but classic love triangle novel written in 1912 by Edith Wharton
Reviewed in the United States on April 10, 2019
Verified Purchase
Edith Wharton (1865-1937 in France) was born into a wealthy New York socially acceptable family in the last year of the Civil War. She spent much of her youth and life in France. She was the first woman to win the Pulitzer Price doing so in 1920 for her masterpiece The Age of Innocence. She was wealthy but had a barren and unhappy marriage though she did have lovers.
One of her best friends was the master novelist Henry James (1843-1916), Their friendship was platonic but his writing style and themes are closely related to those of Wharton. Both are concerned with upper class Americans living in Europe,love affairs and psychological probing of the depths of a character's soul.
The Reef is not well known to the general reading public but should be! The novel was published in 1912 when Wharton was at the top of her literary game. The story is simple. George Darwin has revived his love interest in a formal girlfriend from New York; Anna Summers. She is now Mrs. Leath a widower living in France. She has a young daughter Effie and grown stepson named Owen. While on the way to visit her George meets Sophy Viner. He is 37 years old while Sophy is much younger. She is leaving a bad situation as an employee in a rich woman's home. The two visit Paris together and have a brief affair. Later she shows up at the home of Mrs. Leath upsetting plans for George and Anna to marry. Owen, the stepson, has meanwhile become engaged to Sophy. What a mess! The plot explores the various feelings of each of the characters and is resolved in a surprising way. Wharton is great in her beautiful sketching of the sea and landscape of France. The reef refers to the emotional deep blue sea characters experience within themselves and the polite society in 1912.
I am a big fan of Edith Wharton and love her novels as published in the delightful Everyman series! For pure reading pleasure enjoy this excellent novel!
Read more
5 people found this helpful
Helpful
Report abuse

Olivia Trozze
3.0 out of 5 stars Not her best novel
Reviewed in the United States on August 13, 2019
Verified Purchase
Her writing is always compelling and had me turning the pages wanting to know more and dive deeper into the minds of both of the main characters. The plot was confounding and more Jane Austen-esque than her other work. I read that even she didn't love this book and knew it didn't sound like her. Start with another Wharton novel - House of Mirth or Ethan From would be my recommendation - and then if you've exhausted those you can read this too. Be prepared to want to strangle the main female character for about the last third or more of the book.
Read more
2 people found this helpful
Helpful
Report abuse

Ping Bull
4.0 out of 5 stars A Story men might find instructive
Reviewed in the United States on March 10, 2015
Verified Purchase
Little-known work with a squirrelly ending. Nevertheless, like all of Edith Wharton's work, it was engaging from beginning to end. My take was that it was an exploration of the consequences of premarital sex in the late Gilded Age. Though the references to sexual relations were oblique, to say the least, I think Wharton got the point across that she was talking about "knowing "someone in a biblical sense. However, she couldn't make up her mind about what moral lesson she was trying to convey. She might've run herself into a rat hole and not been able to decide herself. And some of the ideas in the book were highly conventional and annoying, but true to the spirit of the age. For example, Wharton placed far less emphasis on the loss of the woman's virtue because she was not an upper-class woman anyway. Instead she concentrated on the social consequences for a man who engages in premarital relations with a woman from a lower social order and the effect it may have on a prospective upper class bride if it becomes known to her. But in the end, it seems that Wharton couldn't work out what she thought the consequences should be. She seems to be leaning towards saying that an upper-class woman might accept the past sexual dalliances of her future husband, but it would negatively affect the quality of their marriage forever, especially if the dalliance occurred no long before the betrothal. Actually, the consequences might be the same today.

Wharton was a specially brave for taking on this topic during her time. She's a great writer with a lot to say and the stories she uses to make her points are always special.
Read more
4 people found this helpful
Helpful
Report abuse

Sherry
4.0 out of 5 stars Book d read
Reviewed in the United States on November 30, 2021
Verified Purchase
This is an excellent study in the relationships between men and women between different classes; at a time when the class structure was very ridged. It gives a little insight as to how the mores within a society can drive an individual to live a certain way that society dictates is acceptable.
Read more
Helpful
Report abuse

Rebecca W.
1.0 out of 5 stars Terrible version
Reviewed in the United States on July 11, 2021
Verified Purchase
This version is unreadable, so riddled with mistakes that it scarcely makes sense!
Read more
2 people found this helpful
Helpful
Report abuse

Joe Treasure
1.0 out of 5 stars Do read this book but not in this edition
Reviewed in the United Kingdom on July 26, 2019
Verified Purchase
I'm used to the kind of errors that result from the electronic conversion of images into text. They can be mildly distracting, but if I've downloaded, for example, Trollope's entire Chronicles of Barsetshire for 49p I'm not inclined to complain. This, however, from the very first paragraph is so weirdly, comically and incomprehensibly error-ridden that I thought at first it must have been typed up in haste by a mediocre typist working with the radio on. I'm not exaggerating for humorous effect. This was my best guess. (I'm talking specifically about the edition with an underwater reef photo that costs about £3.) And so I bought a different kindle edition for 99p (the one with a painting on the front of a woman with elaborate hair and a green dress). A comparison of the two first pages makes me think that the "reef photo" edition has been electronically translated into English from a foreign-language edition of Wharton's (originally English) novel. Why? I can't imagine.
Read more
2 people found this helpful
Report abuse

dallswang@earthlink.net (David Allswang)
1.0 out of 5 stars Full of errors
Reviewed in the United Kingdom on June 27, 2020
Verified Purchase
The kindle version is full of typos and other errors. Free but useless.
Read more
Report abuse

"smoynihan"
5.0 out of 5 stars Five Stars
Reviewed in the United Kingdom on March 9, 2016
Verified Purchase
Excellent condition. Many thanks.
Read more
Report abuse

Geoffrey Freeman
1.0 out of 5 stars Appalling
Reviewed in Australia on August 27, 2019
Verified Purchase
Absolutely dreadful. This version of The Reef is impossible to read. It is as if it has been translated into English from another language by someone with only a passing acquaintance with the language. I cannot understand how this got into the Kindle market.
Read more
Report abuse
See all reviews
Back to top
Get to Know Us
Make Money with Us
Amazon Payment Products
Let Us Help You
EnglishChoose a language for shopping. United StatesChoose a country/region for shopping.
© 1996-2021, Amazon.com, Inc. or its affiliates