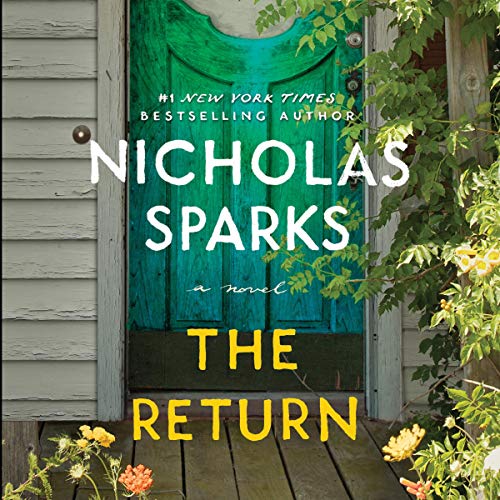 In the romantic tradition of Dear John, an injured Navy doctor meets two extremely important women whose secrets will change the course of his life in this number one New York Times best seller.

Trevor Benson never intended to move back to New Bern, North Carolina. But when a mortar blast outside the hospital where he worked sent him home from Afghanistan with devastating injuries, the dilapidated cabin he'd inherited from his grandfather seemed as good a place to regroup as any.

Tending to his grandfather's beloved beehives, Trevor isn't prepared to fall in love with a local...yet, from their very first encounter, Trevor feels a connection with deputy sheriff Natalie Masterson that he can't ignore. But even as she seems to reciprocate his feelings, she remains frustratingly distant, making Trevor wonder what she's hiding.

Further complicating his stay in New Bern is the presence of a sullen teenage girl, Callie, who lives in the trailer park down the road. Trevor hopes Callie can shed light on the mysterious circumstances of his grandfather's death, but she offers few clues - until a crisis triggers a race to uncover the true nature of Callie's past, one more intertwined with the elderly man's passing than Trevor could ever have imagined.

In his quest to unravel Natalie and Callie's secrets, Trevor will learn the true meaning of love and forgiveness...and that in life, to move forward, we must often return to the place where it all began.

Enjoy a free audiobook + more
Learn more about Membership
List Price: $30.79
You Save: $3.85 (13%)
By completing your purchase, you agree to Audible’s Conditions Of Use
Sold and delivered by Audible, an Amazon company
Share

4.6 out of 5 stars
4.6 out of 5
33,769 global ratings
How are ratings calculated?
To calculate the overall star rating and percentage breakdown by star, we don’t use a simple average. Instead, our system considers things like how recent a review is and if the reviewer bought the item on Amazon. It also analyzes reviews to verify trustworthiness.

alex28
1.0 out of 5 stars Awful
Reviewed in the United States on October 1, 2020
Verified Purchase
The Return is a new low for Mr. Sparks I found myself re-reading complete paragraphs previously encountered earlier in the book. Even more peculiar were incidents described in minute detail before they had even occurred in the chronology.

My only conclusion is that Nicholas Sparks overused the copy/cut and paste feature of his word processor. I envisioned him using a collection of paragraphs much like pieces of a jigsaw puzzle. his problem was that the pieces did not quite fit together.

At the hefty price tag for this book, He and his publisher are insulting his readers. The story itself is mundane and uninteresting. He could have told it in a novella. After slogging through chapter after chapter, I finally reached the unsatisfactory conclusion.

Assigning a book only one star is rare for me. If The Mistress had been written by a first-time author, I might be more forgiving. Mr. Sparks, on the other hand, knows exactly what he is doing.
Read more
252 people found this helpful
Helpful
Report abuse

Karen Krause
5.0 out of 5 stars The Return
Reviewed in the United States on October 1, 2020
Verified Purchase
When I saw the interview on Good Morning America Tuesday morning, l was a little concerned because l had ordered the book on my kindle, but had not started reading it yet
I have read every book Nicholas Sparks has written, but when he said that this one was different, I was a little concerned
No worries to all his fans----it is wonderful! The mystery he referred to just added to it----and I loved reading about the bees.....It is definitely another winner.
Read more
91 people found this helpful
Helpful
Report abuse

A Lowry
4.0 out of 5 stars A story of love, compassion and some mystery
Reviewed in the United States on September 29, 2020
Nicholas Sparks has brought us back to New Bern, North Carolina for another heartwarming story about love, compassion, sacrifice and self-exploration…Oh, and a bit of romance and mystery. There is no doubt about how much I enjoyed reading this book. From the moment I picked it up, I knew I was in for a special treat.

The Return is a multi-thread story that explores real life issues such as PTSD, loss, and heartbreak (but not in the way you think…going to have to read the book to find out what I mean). Sparks keeps these threads flowing throughout the story smoothly while incorporating beautiful scenery and real emotions. The characters are fully developed, and you feel as if they are your own friends. You will care about everything they are experiencing and feeling…Especially Callie.

This story really spoke to my heart. In our current world, we seem to be surrounded by hate, animosity and fear. The characters in The Return brought so much kindness, generosity, compassion and warmth to the story, and this is something I really needed. I love how Sparks has a way of describing the intricacies of relationships within both families and friendships and even those looking to make a connection with others. How Sparks can create so much in the realm of emotions in one book is beyond me.

Sparks did an amazing job with his research, and the story was full of amazing and fascinating details pertaining to PTSD and bee keeping.
Read more
117 people found this helpful
Helpful
Report abuse

Joanne McCormick
1.0 out of 5 stars Book Incomplete
Reviewed in the United States on October 1, 2020
Verified Purchase
The book I received had no cover on it!!!!! Imagine my surprise to open my box that was so anticipated, to find a plain white book. Where is the cover? Why did I not receive a complete book????/
Read more
81 people found this helpful
Helpful
Report abuse

M.Fields
5.0 out of 5 stars Another winner...
Reviewed in the United States on October 3, 2020
Verified Purchase
I just love a good romance. Sparks has done it again. If you love romances and happy endings then you should grab a copy of this one. I bet we see this one on the big screen in the future.
5 stars and I HIGHLY recommend this book.
Read more
68 people found this helpful
Helpful
Report abuse

Misty
3.0 out of 5 stars Slow start but still enjoyable!!
Reviewed in the United States on October 9, 2020
Verified Purchase
3.5 stars

I've said it a million times before that Nicholas Sparks is my all time favorite author. I preordered this book and by the time it came in the mail I had been fighting off a slump for over a month. I decided to pick it up in the hopes that it would help me out of said slump and I think it did the job.

It was a little slow going for the first half of the book but I was intrigued enough to want to keep reading and find out what happened.

Like I said the first half was pretty slow going but the last half things picked up for me. I loved Callie's story the most. That was what I was most interested in while reading this. The romance however fell a little flat for me and was way too rushed. I would have more time with it.

I did enjoy the mystery included though. There are 3 characters that all have secrets of sorts and we learn them throughout the book. That was another thing that kept me reading. I had to know the truth about each of the characters.

Overall it was an enjoyable read and while it's not my favorite book by him I still had a fun time reading it and got teary eyed toward the end.
Read more
59 people found this helpful
Helpful
Report abuse

Casey
5.0 out of 5 stars Great read
Reviewed in the United States on October 1, 2020
Verified Purchase
This was a great read. I finished the book in 2 days. I will admit that there were some slow parts to the beginning of the book, and parts I skimmed over because of the excess detail, however I could not put the book down for the rest. It had a heartwarming story line with some mystery. It was good to get lost in this book. Would definitely recommend.
Read more
47 people found this helpful
Helpful
Report abuse

I am an avid reader of Nicholas Sparks (the reason for five stars) and I'm happy to have saved money, but probably spent that much in gas to retrieve my purchase from a former address!! I am quite disappointed that my change of address more than six months ago -- which has worked for our several purchases since then -- wasn't applied to this purchase. Someone there really dropped the ball on this one!
Read more
27 people found this helpful
Helpful
Report abuse
See all reviews

Kim
3.0 out of 5 stars Not his best work...
Reviewed in the United Kingdom on November 10, 2020
Verified Purchase
I’ve read every single one of his books but I would put this at the bottom of pile and one never to be read again. I found the love story so bizarre and really couldn’t understand how they fell in love or why. In the end I was only invested to know the story behind Callie and literally couldn’t care less about the main character. Really disappointed.
Read more
8 people found this helpful
Report abuse

Amazon Customer
2.0 out of 5 stars Very poor story
Reviewed in the United Kingdom on January 1, 2021
Verified Purchase
Did not like this at all. Close to 1*. Very laborious and tedious story. Have never seen so many semi colons, hyphens and em dashes and very lengthy (6 line) sentences. Because of the overuse of the aforementioned punctuation, it sometimes makes a nonsense of a sentence. Having read 10 books by this author, I would never have dreamt such a poorly written book with loads of holes in the story, was written by him. Trevor is far from brilliant. In my book, he was seriously "thick" and I'd never want such an intellectually challenged man as my doctor. I had to skip read as the book was padded with ridiculous minutiae of his daily life. And the info on bees!!! Reads like it's just been lifted out of a beekeeping manual. Will never reread.
Read more
4 people found this helpful
Report abuse

Kimberley Owen
5.0 out of 5 stars 💖💕💞
Reviewed in the United Kingdom on October 26, 2020
Verified Purchase
Nicholas Sparks.......My favourite author!! Never disappoints! I love the scene setting and always feel like I'm there in the text!
Great book to escape to during isolation too, so thanks!!!
Read more
5 people found this helpful
Report abuse

Karindlt
3.0 out of 5 stars Okay
Reviewed in the United Kingdom on January 11, 2021
Verified Purchase
I’ve always enjoyed NS books. This was a slow burner and never really had any more than a few sparks (sorry..just had to!) and no flash bang. It was almost formulaic: this belongs here, he does that, she does this, let’s add an extra story line in between as a filler, and decide if it will have its HEA..to keep the reader going until the last page. It’s clean, almost too sterile. Basically, it’s the same as any romance out there and unexpectedly boring for such a good author.
Read more
Report abuse

Lise A.
1.0 out of 5 stars disppointed
Reviewed in the United Kingdom on November 9, 2020
Verified Purchase
The book was a great disappointment
Read more
4 people found this helpful
Report abuse
See all reviews
Back to top
Get to Know Us
Make Money with Us
Amazon Payment Products
Let Us Help You
EnglishChoose a language for shopping. United StatesChoose a country/region for shopping.
© 1996-2022, Amazon.com, Inc. or its affiliates