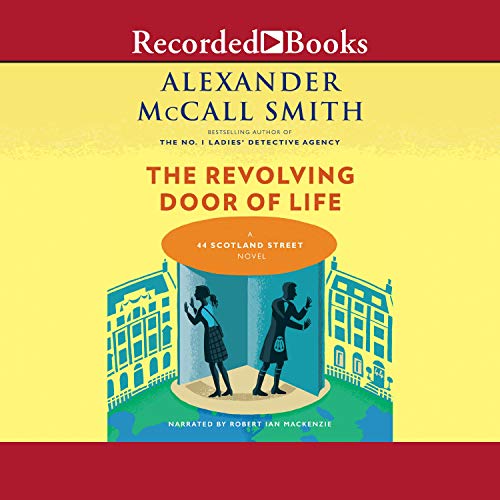 The Revolving Door of Life

List Price: $24.49
You Save: $3.06 (12%)
By completing your purchase, you agree to Audible’s Conditions Of Use
Sold and delivered by Audible, an Amazon company
Share

4.5 out of 5 stars
4.5 out of 5
699 global ratings
How are ratings calculated?
To calculate the overall star rating and percentage breakdown by star, we don’t use a simple average. Instead, our system considers things like how recent a review is and if the reviewer bought the item on Amazon. It also analyzes reviews to verify trustworthiness.
Top reviews

Carol P.
3.0 out of 5 stars I love this author and have read just about all of ...
Reviewed in the United States on February 19, 2016
Verified Purchase
I love this author and have read just about all of his books, but this one is not his best. In my opinion there was way too much philosophical discussion that went on too long. Instead I would have liked to learn more about the adorable little Bertie and how he was coming to a brighter life thru his Granny. And maybe a little more about Cyril, the capricious little dog with the gold tooth. And there was hardly a mention of Big Lou with her man troubles. I guess I was hoping that the interesting characters of the series would get more time than they did. That being said, I await the next installment of the 44 Scotland Street series. It will be interesting to see if the terrible Irene will get the last word about how to raise two little boys, or if the spirited Granny will win out the day.
Read more
14 people found this helpful
Helpful
Report abuse

gammyjill
TOP 500 REVIEWER
5.0 out of 5 stars Marvelous new book in the series...
Reviewed in the United States on January 22, 2016
Vine Customer Review of Free Product( What's this? )Verified Purchase
Lucky Bertie Pollock. He's just turned seven years old in "The Revolving Door of Life", Alexander McCall Smith's latest novel in his "44 Scotland Street" series. Bertie's mother, Irene - possibly one of the worst mothers in modern literature - has been taken by mistake into a Bedouin harem while visiting the Gulf states. For the first time in his short life, Bertie doesn't have Irene bossing him around and not letting him have any fun at all. He's had to wear pink pants to show his solidarity for gender issues, and he's not allowed to play with boys. All Bertie wants is to play with boys, wear a kilt, and have a Swiss Army knife. Now, maybe he's too young for the knife, but he knows what he wants. Bertie's father - the hapless Stuart married to the awful Irene - can't stand up to her. But while she's "away" in the Middle East, Bertie, his baby brother, and Stuart are under the care of Stuart's mother, Nicola, who has come to Edinburgh to take care of the three guys. Suddenly Bertie gets a kilt, pizza, and boy friends to play with. But can it last?

Bertie and his family are just two of the many characters in Smith's Edinburgh stories. A bit like American author Armistead Maupin's "Tales of the City" series, which center around the eccentric occupants of an apartment building in San Francisco, Smith's books also feature a cast of characters. A bit less eccentric than Maupin's crew, Smith's characters are a charming lot of artists and dealers, coffee shop owners, dogs, a Duke-who-possibly-isn't-REALLY-a-duke, and, of course, Bertie Pollock and the dreadful Irene. This latest book - the 10th in the Scotland series - is less plot-centric and more character-centered. Oh, things happen but they are relatively minor things, and the reader concentrates more on the characters.

One of the best things about series books is the chance to return to old friends and catch up on their lives. This is only the second Smith book I've read but I'm surely returning for #11! I want to know what happens to Bertie, and all the others I've become enamoured with in only two books.
Read more
8 people found this helpful
Helpful
Report abuse

D. M. Read
5.0 out of 5 stars Bertie is the funniest seven-year-old boy in the world
Reviewed in the United States on July 11, 2020
Verified Purchase
If you enjoy a laugh--and I do--this book is for you. I found myself giggling helplessly at the antics of the characters, particularly the character of wide-eyed, terminally truthful Bertie. Alex McCall Smith has a droll way of writing that induces the same feeling of pleasure as that induced by a glass of good wine or a cup of perfectly prepared Indian tea. After finishing the book I was left with the feeling that I wanted more, more, so I bought the next in the series. More belly laughs!

Honestly, in this Plague Year of 2020, reading the "44 Scotland Street" series is the nearest one can get to a vacation.
Read more
Helpful
Report abuse

So for one book we get to see Bertie cared for by his grandmother rather than Irene. It is the difference between night and day. The grandmother is now in the series for good so her upcoming battles with Irene should be really good in the subsequent books.

We also catch up with Matthew and his triplets. He still can't tell one from the other. Pat is still his assistant although she has a big problem with her psychiatrist father. They need to enlist the aid of the narcissistic Bruce in order to solve that dilemma. Bruce is the second least likable character in the series. Yet again he is a rich source of satire so he has to be here.

Cyril the dog, Angus, Domenica and Big Lou are about the same as usual. They aren't as big in this story as they have been in others. However, each of these books varies on the amount of coverage members of the ensemble get.

These books are very much an ensemble work. There is no main character. It would ruin the books if this changed. Excellent as usual. I love these books.
Read more
3 people found this helpful
Helpful
Report abuse
See all reviews

Monosabio
4.0 out of 5 stars Carry on nudists
Reviewed in the United Kingdom on December 21, 2020
Verified Purchase
Life continues in Edinburgh with the usual characters plus a couple of additions. There are the usual odd things, Domenica's loss of a dozen years of age is a touch puzzling and I'm still wondering how Bertie and his father managed to meet his grandmother in arrivals at the airport before she had collected her suitcase from the carousel or gone through customs but perhaps Scottish airports are different. These small matters of continuity are trifles really, it is the overall experience of these novels which is most important really although I, personally, could have done without the Scottish nudists. The absence of Irene even for such a barely credible reason, was something of a relief but I hope she will be back to her poisonous self in the next book.
Read more
Report abuse

Orlando
5.0 out of 5 stars Artistic license
Reviewed in the United Kingdom on November 3, 2018
Verified Purchase
I have spent three months reading through these books around my busy life and enjoy following the life of the families who live in Scotland Street. I have met some interesting characters, enjoyed following them through their day to day life and celebrated birthdays, holidays and marriages with them. I have walked with them as they make their way around Edinburgh, go on a train to Glasgow, and fly off to Italy.
Young Bertie has entranced me with his direct manner and intelligence; Domenica with her anthropological observations and Angus with his artistic view of the world, as well as the other residents who are connected with 44 Scotland Street.

My only issue is that the author, Alexander McCall Smith tends to forget the passing of time in places. Also, having found that Domenica is the same age as me in the first book, she suddenly drops about 13 years in this book. Bertie seems to have been held in time, also, during the time of the book.

I put this down to artistic licence. I believe that this is the 3rd book from the end, so will be visiting Amazon to continue my fix of Scotland, and Edinburgh in particular!
Read more
Report abuse

J. Daniell
3.0 out of 5 stars Excellent writing, poor quality paper
Reviewed in the United Kingdom on April 24, 2016
Verified Purchase
The content of the book is, as ever, lovely - like relaxing in a warm bath! BUT the quality of the actual book - the paper and cover - is terrible! For over £10 I would expect something a little more substantial - the pages are very thin and easily torn. As a big fan of these books, I am likely to read them more than once - but I suspect this one might not survive in one piece! I am all for conservation of trees, but I like to hang on to my books, not put them in the recycling bin as soon as I've read them once!
Read more
3 people found this helpful
Report abuse

Steve_Morris
4.0 out of 5 stars Bertie tastes freedom
Reviewed in the United Kingdom on February 12, 2017
Verified Purchase
I think it is good that we have all (but especially Bertie) had a break from Irene. But she returned like a damp Scotch mist at the end if the book, descending on a sunlit Munroe to make us cold and gloomy. I do hope things improve in the next book. The other characters are as fun as ever especially the come.-uppance for the insufferable Bruce.
Read more
One person found this helpful
Report abuse
See all reviews
Back to top
Get to Know Us
Make Money with Us
Amazon Payment Products
Let Us Help You
EnglishChoose a language for shopping. United StatesChoose a country/region for shopping.
© 1996-2021, Amazon.com, Inc. or its affiliates