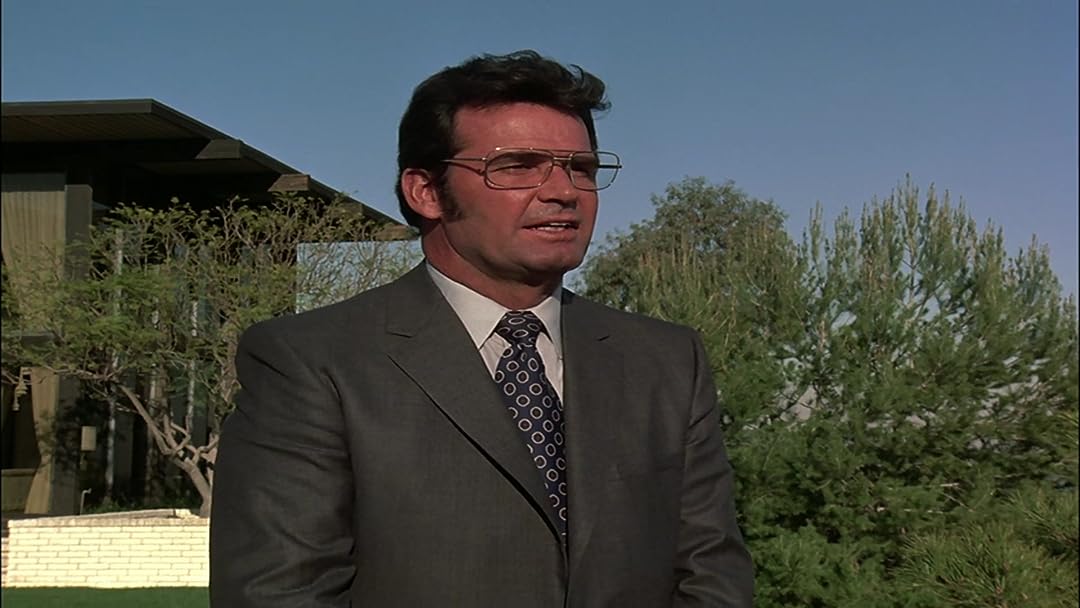 (619)
8.11975X-Ray7+
This classic TV series centers on Jim Rockford (James Garner), a top-shelf private investigator with a background his clients would never expect. A former jailbird who lives in a trailer in Malibu, Jim has a fine-tuned sense of justice that was honed when he was framed for a crime. That's why he's set up a shingle and committed his life to hounding those who are truly guilty. Want to hire him?

Robert McgoldrickReviewed in the United States on October 12, 2016
5.0 out of 5 stars
Excellent Mill Creek Release
Verified purchase
I was surprised at the quality of this Mill Creek release. I had bought a few Mill Creek sets and the quality not very good. While they put 6 episodes per disk,the original was 4 per disk. They have re-mastered the episodes and using progressive scan on the video,the original was inter-laced and the progressive scan makes a great difference. Colors are superb and sharpness and detail are very good. I hope future releases are also progressive scanned. Season 2 is as good as season is.
16 people found this helpful

Rama RaoReviewed in the United States on September 4, 2014
5.0 out of 5 stars
James Garner at his best
Verified purchase
I am one of the big fans of James Garner who entertained fans much of his career through his fine acting in movies and television. Rockford Files is masterpiece and the first season is one the best of the series. There are 23 episodes of the first season and Garner stars as the offbeat Jim Rockford, the private-investigator who does not use violence, but uses friendly conversation to solve some of the most difficult circumstances in his television life. He runs his business from a mobile home on the beach in Malibu, California with his father. He chases bad guys in his Pontiac Firebird on the streets and highways of Los Angeles. Several future stars of television guest in the first season and they include Lindsay Wagner, James Woods, Abe Vigoda, Suzanne Somers and Ned Beatty. This is an excellent addition to your library and to remember James Garner! He was not only a great actor but also a war hero. He was awarded Purple Heart twice for his heroic efforts in Korean War. James Garner is sorely missed. James Garner R.I.P.
9 people found this helpful

TV Generation DaveReviewed in the United States on March 21, 2012
5.0 out of 5 stars
# 1 ALL-TIME CLASSIC P.I. Series
Verified purchase
The Rockford Files (1974-80) NBC. (5 and a Half Seasons)
5 emmys the All-Time # 1 PI series. James Garner {Jim Rockford}, Noah Beery {Rocky}, Joe Santos {Dennis}, Stuart Margolin {Angel}.
Rockford always got the oddball cases that put him in tight spots; beat up often, lots of car chases, but he always managed to come out on top with his cons & routines. Co-star his Pontiac Firebird Classic Sports Car, {The Rockfordmobile}, that out-ran all the baddies. His Texas characters, printing press, and routines are classics! Began as a spin-off from Jack Webb's Adam-12, laid the groundwork for the series, with Jim in trouble with the law. (Jim, Jimbo, Jimmy) almost NEVER got paid!
Feb 2005 James Garner received the 41st Lifetime Achievement Award

If Universal would release the 2nd DVD of Rockfird Files 1990s Movies.....

If WB would just release Bret Maverick The Lazy Ace (1980) the world would be a better place.

J.blueReviewed in the United States on June 20, 2013
3.0 out of 5 stars
Happy to find classic show on DVD, disappointed in the media quality
Verified purchase
My father was big fan of this show and I was happy to find it on here on dvd. I wish I had read more of the reviews because I might not have bought it. We have only viewed one disc so far but there is issues with the disc freezing when playing episodes. I was able to get an episode to play by choosing the scene selection and skipping the opening sequence. I'm kind of disappointed in amazon because I see reviews stating the same problems from years back and you would think they would stop selling the set or try to rectify the problem. The upside is that it plays fine on another dvd player in the home which makes no sense at all. I'm thinking it's the dual disc format.
6 people found this helpful

William FlaniganReviewed in the United States on February 18, 2006
4.0 out of 5 stars
A Class Act in 23 Episodes
Verified purchase
Arguably the last, great free TV detective series, the content of the first season of the ROCKFORD FILES ranges from pedestrian scripts (such as half-hour shows stretched to two-hours--replete with many repeats of the same scenes) to superior screen treatments loaded with suspense and multiple red herrings. This classic 70's TV show is packed with humor, pretty good acting, great music, and imaginative car chases using what are now classic cars. It's likely to bring tears to your eyes when you see these beauties being wrecked! DVD audio quality is first rate making sound short-cuts taken by the original audio engineers (e.g., uneven sound mixing, canned sound effects, and little or no looping) jarring if not amusing (this was when TV speakers were usually smaller than your cell phone, so who could hear the difference?!). Video quality is a mixed bag (when viewed at 720p). Some shows are sharp and colorful; others suffer from color wash-out (especially episodes 7 [THIS CASE IS CLOSE PART I] and 8 [THIS CASE IS CLOSED PART II] and the last few episodes on the last disk). Dirt is often to be seen, and grain is very noticeable in some episodes. Obviously, the DVD producers went cheap and did not digitally remaster or do much (or anything) to clean up the source materials. The disks themselves are poorly presented. You need a jewelers eye piece to read which is side A (these are dual-sided disks with labeling confined to a few millimeter around the spindle hole), and side B is not labeled. Tricky to handle when you are trying to keep finger prints off both reading surfaces. There is no DVD booklet. "Extras" consist of a short, rather depressing interview with the star (on the first disk). To keep the fantasy alive and well, recommend skipping it.
4 people found this helpful

givbatam3Reviewed in the United States on September 6, 2004
5.0 out of 5 stars
A Masterpiece
Verified purchase
I lived in Southern California during the 1970's when this

magnificent series was made and I can vouch for how well

the writers, actors, directors, producers and everyone else

involved were able to bring this slightly wacky society

to life on the TV screen. Some episodes are quite serious

(the saddest being when Jim's girlfriend was rubbed out

is involved). Some episodes are based on real-life situations,

locked up in a retirement home/mental hospital against his will so that his evil son-in-law can get ahold of his property.

Unlike some other actors in long-running series, James Garner

always gave his best, so there is nary a bad episode in the lot.

It's about time that this fine series appear in DVD!
28 people found this helpful

Classic Film NutReviewed in the United States on December 22, 2016
5.0 out of 5 stars
Have been waiting for this one.....
Verified purchase
I postponed buying this set because of negative reviews in past posts about faulty discs. I am happy to report that the latest release seems to have addressed those problems. The set I received played perfectly and the picture quality couldn't be better. Price was right, too. What a bargain! The only drawback for me is the packaging. The discs are stacked on a single spindle. Other than being a nuisance when trying to locate and remove a particular disc, the arrangement makes it much easier to scratch or otherwise damage discs as you remove and replace each. Otherwise, love the set and would recommend purchase.
6 people found this helpful

Kenneth Michael PizziReviewed in the United States on June 29, 2006
5.0 out of 5 stars
Fine Series Finally Gets It's Due......
Verified purchase
The 70's offered an excellent cornucopia of TV detective dramas: "Baretta," "Kojack," "Columbo," and "Ironside" to name a few, but perhaps no other private eye on television has been more realistically portrayed than James Garner's Jim Rockford of "The Rockford Files."

This is a well-produced set including a short interview with Jim Garner shortly before he died in 2004. Transfers are clean, the sound is excellent, and I experienced no technical issues with my DVD set. Enjoying a highly successful run during prime time in the 70's, the series was characterized by excellent acting not only with James Garner in the lead, but also with supporting players like Noah Berry Jr, Stuart Margolin, Joe Santos, among others. Loosely based on the character of private detective Phillip Marlowe, Garner was ideally cast.

Ex-con now turned private eye, Jim Rockford was a refreshing antithesis to Mickey Spillane's tough-guy Mike Hammer; Rockford is not a wimp, but would rather talk his way out of a fight if he could. And that is part of his appeal: he is an "Everyman" who is, of course, flawed and not necessarily heroic, but principled where his clients and close friends are concerned.

The brainchild of Steven J. Cannell, this was the series that made him a household name for the popular television dramas produced during the 1970's. When the series aired initially, I was too young to appreciate "The Rockford Files" finding it rather slow, but now, thanks to this excellent DVD collection, I can now savor this series and enjoy one of TV's most charismatic and enduring characters.
6 people found this helpful
See all reviews
Back to top
Get to Know Us
Make Money with Us
Amazon Payment Products
Let Us Help You
EnglishChoose a language for shopping. United StatesChoose a country/region for shopping.
© 1996-2022, Amazon.com, Inc. or its affiliates